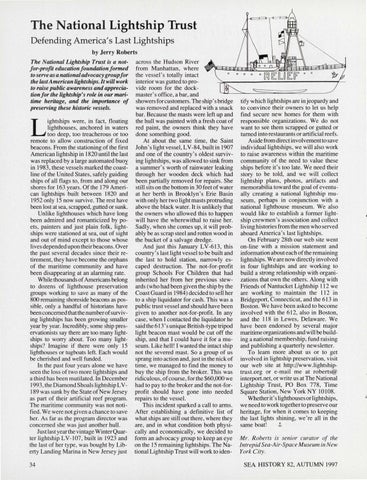 ightships were, in fact, floating lighthouses, anchored in waters too deep, too treacherous or too remote to allow construction of fixed beacons. From the stationing of the first American lightship in 1820 until the last was replaced by a large automated buoY. in 1983, these vessels marked the coastline of the United States, safely guiding ships of all flags to, from and along our shores for 163 years. Of the 179 American lightships built between 1820 and 1952 only 15 now survive. The rest have been lost at sea, scrapped, gutted or sunk. Unlike lighthouses which have long been admired and romanticized by poets, painters and just plain folk, lightships were stationed at sea, out of sight and out of mind except to those whose lives depended upon their beacons. Over the past several decades since their retirement, they have become the orphans of the maritime community and have been disappearing at an alarming rate. While thousands of Americans belong to dozens of lighthouse preservation groups working to save as many of the 800 remaining shoreside beacons as possible, only a handful of historians have been concerned that the num berof survi ving lightships has been growing smaller year by year. Incredibly, some ship preservationists say there are too many lightships to worry about. Too many lightships? Imagine if there were only 15 lighthouses or tugboats left. Each would be cherished and well funded. In the past four years alone we have seen the loss of two more lightships and a third has been mutilated. In December 1993, the Diamond Shoals lightship L V189 was sunk by the State of New Jersey as part of their artificial reef program. The maritime community was not notified. We were not given a chance to save her. As far as the program director was concerned she was just another hull. Just last year the vintage Winter Quarter lightship L V-107, built in 1923 and the last of her type, was bought by Liberty Landing Marina in New Jersey just

across the Hudson River from Manhattan, where the vessel's totally intact interior was gutted to provide room for the dockmaster's office, a bar, and showers for customers. The ship 's bridge was removed and replaced with a snack bar. Because the masts were left up and the hull was painted with a fresh coat of red paint, the owners think they have done something good. At about the same time, the Saint John's light vessel, LV-84, built in 1907 and one of the country's oldest surviving lightships, was allowed to sink from a summer' s worth of rainwater leaking through her wooden deck which had been partially removed for repairs . She still sits on the bottom in 30 feet of water at her berth in Brooklyn's Erie Basin with only her two light masts protruding above the black water. It is unlikely that the owners who allowed this to happen will have the wherewithal to raise her. Sadly, when she comes up, it will probably be as scrap steel and rotten wood in the bucket of a salvage dredge. And just this January LV-613 , this country's last light vessel to be built and the last to hold station , narrowly escaped destruction. The not-for-profit group Schools For Children that had inherited her from her previous stewards (who had been given the ship by the Coast Guard in 1984) decided to sell her to a ship liquidator for cash. This was a public trust vessel and should have been given to another not-for-profit. In any case, when I contacted the liquidator he said the613 's unique British-type tripod light beacon mast would be cut off the ship, and that I could have it for a museum. Like hell! I wanted the intact ship not the severed mast. So a group of us sprang into action and, just in the nick of time, we managed to find the money to buy the ship from the broker. This was ridiculous, of course, for the $60,000 we had to pay to the broker and the not-forprofit should have gone into needed repairs to the vessel. This incident sparked a call to arms . After establishing a definitive list of what ships are still out there, where they are, and in what condition both physically and economically, we decided to form an advocacy group to keep an eye on the 15 remaining lightships. The National Lightship Trust will work to iden-

tify which lightships are in jeopardy and to convince their owners to let us help find secure new homes for them with responsible organizations. We do not want to see them scrapped or gutted or turned into restaurants or artificial reefs . Aside from direct involvement to save individual lightships, we will also work to raise awareness within the maritime community of the need to value these ships before it's too late. We need their story to be told, and we will collect lightship plans, photos, artifacts and memorabilia toward the goal of eventually creating a national lightship museum , perhaps in conjunction with a national lighthouse museum. We also would like to establish a former lightship crewmen's association and collect living histories from the men who served aboard America 's last lightships. On February 28th our web site went on-line with a mission statement and information about each of the remaining lightships . We are now directly involved in four lightships and are working to build a strong relationship with organizations that own the others. Along with Friends of Nantucket Lightship 112 we are working to maintain the 112 in Bridgeport, Connecticut, and the 613 in Boston. We have been asked to become involved with the 612, also in Boston, and the 118 in Lewes, Delaware. We have been endorsed by Âˇseveral major maritime organizations and will be building a national membership, fund raising and publishing a quarterly newsletter. To learn more about us or to get involved in lightship preservation, visit our web site at http://www.lightshiptrust.org or e-mail me at roberts@ interport.net, or write us at The National Lightship Trust, PO Box 778, Time Square Station, New York NY 10108. Whether it' s lighthouses or lightships, we need to work together to preserve our heritage, for when it comes to keeping the last lights shining, we're all in the ,t same boat! Mr. R oberts is senior curator of the Intrepid Sea-Air-Space Museum in New York City.