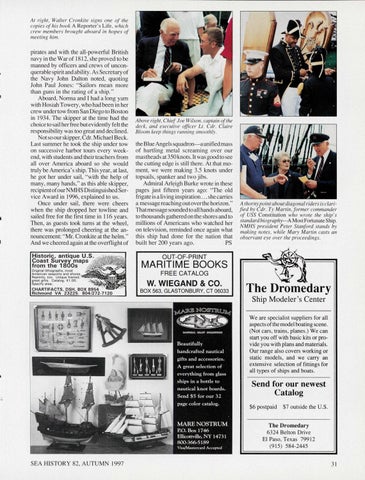 At right , Walter Cronkite signs one of the copies of his book A Reporter's Life, which crew members brought aboard in hopes of meeting him .

pirates and with the all-powerful British navy in the Warof 1812, she proved to be manned by officers and crews of unconquerable spirit and ability. As Secretary of the Navy John Dalton noted, quoting John Paul Jones : "Sailors mean more than guns in the rating of a ship." Aboard, Norma and I had a long yarn with Hosiah Towery, who had been in her crew under tow from San Diego to Boston in 1934. The skipper at the time had the choice to sail herfree but evidently feltthe responsibility was too great and declined. Not so our skipper, Cdr. Michael Beck. Last summer he took the ship under tow on successive harbor tours every weekend, with students and their teachers from all over America aboard so she would truly be America's ship. This year, at last, he got her under sail, "with the help of many, many hands," as this able skipper, recipientofour NMHS Distinguished Service Award in 1996, explained to us. Once under sail, there were cheers when the ship dropped her towline and sailed free for the first time in 116 years. Then, as guests took turns at the wheel, there was prolonged cheering at the announcement: "Mr. Cronkite at the helm." And we cheered again at the overflight of Historic, antique U.S. , . Coast Survey maps ~ from the 1800s Original lithographs, most American seaports and shores. Reprints, too. Unique framed , great gifts. Catalog, $1.00. Specify area.

theBlueAngels squadron-a unified mass of hurtling metal screaming over our mastheads at350 knots. It was good to see the cutting edge is sti ll there. At that moment, we were making 3.5 knots under topsails, spanker and two jibs. Admiral Arleigh Burke wrote in these pages just fifteen years ago: "The old frigate is a living inspiration .. . she carries a message reaching out over the horizon. " That message sounded to all hands aboard, to thousands gathered on the shores and to millions of Americans who watched her on television, reminded once again what this ship had done for the nation that PS built her 200 years ago.

A thorny point about diagonal riders is clarified by Cdr. Ty Martin.former commander of USS Constitution who wrote the ship's standard biography-A Most Fortunate Ship. NMHS president Peter Stanford stands by making notes, while Mary Martin casts an observant eye over the proceedings.

The Dromedary Ship Modeler's Center We are specialist suppliers for all aspects of the model boating scene. (Not cars, trains, planes .) We can start you off with basic kits or provide you with plans and materials. Our range also covers working or static models, and we carry an extensive selection of fittings for all types of ships and boats.