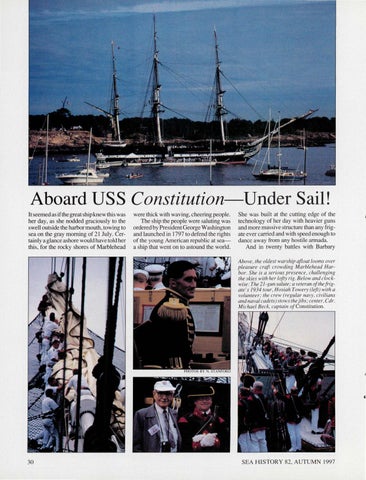 Aboard USS Constitution-Under Sail! It seemed as ifthegreatshipknewthis was her day, as she nodded graciously to the swell outside the harbor mouth, towing to sea on the gray morning of 21 July. Certain! ya glance ashore would have told her this, for the rocky shores of Marblehead

were thick with waving, cheering people. The ship the people were saluting was ordered by President George Washington and launched in 1797 to defend the rights of the young American republic at seaa ship that went on to astound the world.

She was built at the cutting edge of the technology of her day with heavier guns and more massive structure than any frigate ever carried and with speed enough to dance away from any hostile annada. And in twenty battles with Barbary Above, the oldest warship afloat looms over pleasure craft crowding Marblehead Harbor. She is a serious presence, challenging the skies with her lofty rig. Below and clockwise: The 21-gun salute; a veteran of the frigate&#39; s 1934 tour, Hosiah Towery (left) with a voluntee r; the crew (regular navy, civilians and naval cadets) stows the jibs; center, Cdr. Michael Beck, captain of Constitution.