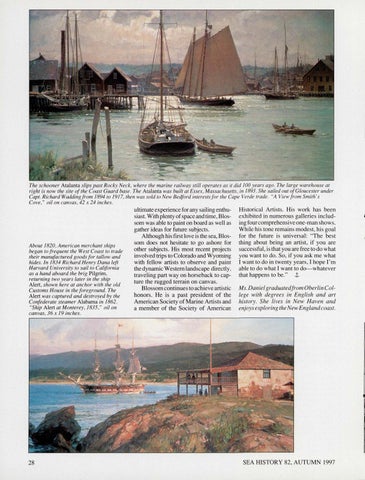 The schooner Atalanta slips past Rocky Neck, where the marine railway still operates as it did JOO years ago. The large warehouse at right is now the site of the Coast Guard base. The Atalanta was built at Essex, Massachusetts, in 1893 . She sailed out of Gloucester under Capt. Richard Wadding from 1894 to 1917, then was sold to New Bedford interests for the Cape Verde trade. &quot;A View from Smith&#39;s Cove,&quot; oil on canvas, 42 x 24 inches.

About 1820, American merchant ships began to frequent the West Coast to trade their manufactured goods for tallow and hides. Jn 1834 Richard Henry Dana left Harvard University to sail to California as a hand aboard the brig Pilgrim, returning two years later in the ship Alert, shown here at anchor with the old Customs House in the foreground. The Alert was captured and destroyed by the Confederate steamer Alabama in 1862 . &quot;Ship Alert at Monterey, 1835,&quot; oil on canvas, 36 x 19 inches.

ultimate experience for any sailing enthusiast. With plenty of space and time, Blossom was able to paint on board as well as gather ideas for future subjects. Although his first love is the sea, Blossom does not hesitate to go ashore for other subjects. His most recent projects involved trips to Colorado and Wyoming with fellow artists to observe and paint the dynamic Western landscape directly, traveling part way on horseback to capture the rugged terrain on canvas. Blossom continues to achieve artistic honors. He is a past president of the American Society of Marine Artists and a member of the Society of American

Historical Artists . His work has been ex hibited in numerous galleries including four comprehensive one-man shows. While hi s tone remains modest, his goal for the future is universal: &quot;The best thing about being an artist, if you are successful, is that you are free to do what you want to do. So, if you ask me what I want to do in twenty years, I hope I&#39;m able to do what I want to do-whatever that happens to be.&quot; J, Ms. Daniel graduated from Oberlin College with degrees in English and art history . She lives in New Haven and enjoys exploring the New England coast.