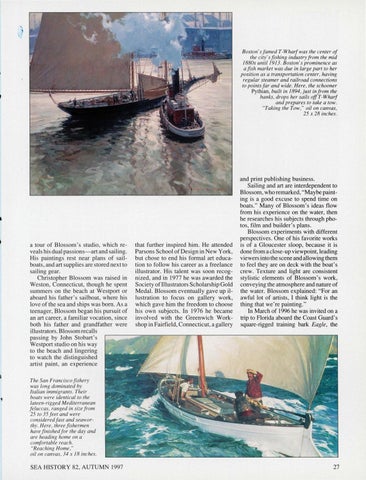 Boston' s famed T-Wharf was the center of the city's fishing industry from the mid 1880s until 1913. Boston's prominence as a fish market was due in large part to her position as a transportation center, having regular steamer and railroad connections to points far and wide. Here , the schooner Pythian, built in 1894 , just in from the banks , drops her sails off T-Wharf and prepares to take a tow. "Taking the Tow," oil on canvas, 25 x 28 inches.

â&#x20AC;˘ a tour of Blossom's studio, which reveals his dual passions-art and sailing. His paintings rest near plans of sai lboats, and art supplies are stored next to sailing gear. Christopher Blossom was raised in Weston, Connecticut, though he spent summers on the beach at Westport or aboard hi s father's sailboat, where his love of the sea and ships was born. As a teenager, Blossom began hi s pursuit of an art career, a familiar vocation, since both hi s father and grandfather were illustrators. Blossom recalls passing by John Stobart's Westport studio on his way to the beach and lingering to watch the di stinguished artist paint, an experience

that further inspired him. He attended Parsons School of Design in New York, but chose to end his formal art education to follow his career as a freelance illustrator. His talent was soon recognized, and in 1977 he was awarded the Society of Illustrators Scholarship Gold Medal. Blossom eventually gave up illustration to focus on gallery work, which gave him the freedom to choose his own subjects. In 1976 he became involved with the Greenwich Workshop in Fairfield, Connecticut, a gallery

and print publishing business. Sailing and art are interdependent to Blossom, who remarked, "Maybe painting is a good excuse to spend time on boats." Many of Blossom's ideas flow from his experience on the water, then he researches his subjects through photos, film and builder's plans. Blossom experiments with different perspectives. One of his favorite works is of a Gloucester sloop, because it is done from a close-up viewpoint, leading viewers into the scene and allowing them to feel they are on deck with the boat's crew. Texture and light are consistent stylistic elements of Blossom's work, conveying the atmosphere and nature of the water. Blossom explained: "For an awful lot of arti sts, I think light is the thing that we're painting." In March of 1996 he was invited on a trip to Florida aboard the Coast Guard 's square-rigged training bark Eagle, the

The San Francisco fishery was long dominated by Italian immigrants. Their boats were identical to the lateen-rigged Mediterranean feluccas, ranged in size from 25 to 35 feet and were considered fast and seaworthy. Here , three fishe rmen have finished for the day and are heading home on a comfortable reach. "Reaching Home," oil on canvas, 34 x 18 inches.