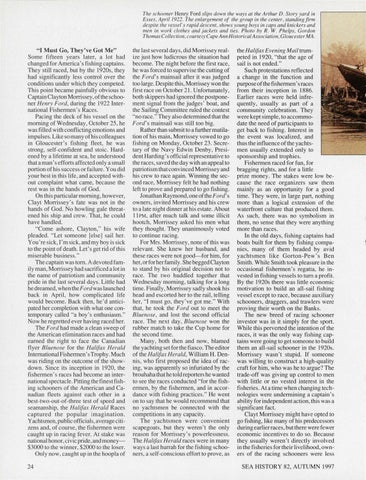 The schooner Henry Ford slips down the ways at the Arthur D. Story yard in Essex, April 1922. The enlargement of the group in the center, standing firm despite the vessel's rapid descent , shows young boys in caps and knickers and men in work clothes and jackets and ties. Photo by R. W. Phelps , Gordon Thomas Collection, courtesy Cape Ann Historical Association, Gloucester MA.

"I Must Go, They've Got Me" Some fifteen years later, a lot had changed for America's fishing captains. They still raced, but by the I 920s, they had significantly less control over the conditions under which they competed. This point became painfully obvious to Captain Clayton Morrissey, of the schooner Henry Ford, during the 1922 International Fishermen's Races. Pacing the deck of his vessel on the morning of Wednesday, October 25, he was filled with conflicting emotions and impulses. Like so many of his colleagues in Gloucester's fishing fleet, he was strong, self-confident and stoic. Hardened by a lifetime at sea, he understood that a man's efforts affected on! y a small portion of his success or failure. You did your best in this life, and accepted without complaint what came, because the rest was in the hands of God. On this particular morning, however, Clayt Morrissey's fate was not in the hands of God. No howling gale threatened his ship and crew. That, he could have handled. "Come ashore, Clayton," his wife pleaded. "Let someone [else] sail her. You 're sick, I'm sick, and my boy is sick to the point of death. Let's get rid of this miserable business." The captain was tom. A devoted family man, Morrissey had sacrificed a Jot in the name of patriotism and community pride in the last several days. Little had he dreamed, when theFordwas launched back in April, how complicated life would become. Back then, he'd anticipated her completion with what one contemporary called "a boy's enthusiasm." Now he regretted ever having raced her. The Ford had made a clean sweep of the American elimination races and had earned the right to face the Canadian flyer Bluenose for the Halifax Herald International Fishermen's Trophy. Much was riding on the outcome of the showdown. Since its inception in 1920, the fishermen's races had become an international spectacle. Pitting the finest fishing schooners of the American and Canadian fleets against each other in a best-two-out-of-three test of speed and seamanship, the Halifax Herald Races captured the popular imagination. Yachtsmen, public officials, average citizens and, of course, the fishermen were caught up in racing fever. At stake was national honor, civic pride, and money$3000 to the winner, $2000 to the loser. Only now, caught up in the hoopla of 24

the last several days, did Morrissey realize just how ludicrous the situation had become. The night before the first race, he was forced to supervise the cutting of the Ford's mainsail after it was judged too large. Despite this, Morrissey won the first race on October 21. Unfortunately, both skippers had ignored the postponement signal from the judges' boat, and the Sailing Committee ruled the contest "no race." They also determined that the Ford's mainsail was sti ll too big. Rather than submit to a further mutilation of his main, Morrissey vowed to go fishing on Monday, October 23. Secretary ofthe Navy Edwin Denby, President Harding's official representative to the races, saved the day with an appeal to patriotism that convinced Morrissey and his crew to race again. Winning the second race, Morrissey felt he had nothing left to prove and prepared to go fi shing. Jonathan Raymond, one of the Ford's owners, invited Morrissey and his crew to a late night dinner at hi s estate. About l lPM, after much talk and some illicit hootch, Morrissey asked his men what they thought. They unanimously voted to continue racing. For Mrs. Morrissey, none of this was relevant. She knew her husband, and these races were not good-for him, for her, or for her fami Iy. She begged Clayton to stand by his original decision not to race. The two huddled together that Wednesday morning, talking for a long time. Finally, Morrissey sadly shook his head and escorted her to the rail, telling her, "I must go, they've got me." With that, he took the Ford out to meet the Bluenose, and lost the second official race. The next day, Bluenose won the rubber match to take the Cup home for the second time. Many, both then and now, blamed the yachting set for the fiasco. The editor of the Halifax Herald, William H. Dennis, who first proposed the idea of racing, was apparently so infuriated by the brouhaha that he told reporters he wanted to see the races conducted "for the fishermen, by the fishermen, and in accordance with fishing practices." He went on to say that he would recommend that no yachtsmen be connected with the competitions in any capacity. The yachtsmen were convenient scapegoats, but they weren't the only reason for Morrissey's powerlessness. The Halifax Herald races were in many ways a last hurrah for the fishing schooners, a self-conscious effort to prove, as

the Halifax Evening Mail trumpeted in 1920, "that the age of sail is not ended." Such protestations reflected a change in the function and purpose of the fishermen's races from their inception in 1886. Earlier races were held infrequently , usually as part of a community celebration. They were kept simple, to accommodate the need of participants to get back to fishing. Interest in the event was localized, and thus the influence of the yachtsmen usually extended only to sponsorship and trophies. Fishermen raced for fun, for bragging rights, and for a little prize money. The stakes were low because the race organizers saw them mainly as an opportunity for a good time. They were, in large part, nothing more than a logical extension of the waterfront culture that produced them. As such, there was no symbolism in them, no sense that they were anything more than races. In the old days, fishing captains had boats built for them by fishing companies, many of them headed by avid yachtsmen like Gorton-Pew's Ben Smith. While Smith took pleasure in the occasional fishermen's regatta, he invested in fishing vessels to tum a profit. By the 1920s there was little economic motivation to build an all-sail fishing vessel except to race, because auxiliary schooners, draggers, and trawlers were proving their worth on the Banks. The new breed of racing schooner investor was in it simply for the sport. While this perverted the intention of the races, it was the only way fishing captains were going to get someone to build them an all-sail schooner in the 1920s. Morrissey wasn't stupid. If someone was willing to construct a high-quality craft for him, who was he to argue? The trade-off was giving up control to men with little or no vested interest in the fisheries. At a time when changing technologies were undermining a captain's ability for independent action, this was a significant fact. Clayt Morrissey might have opted to go fishing, like many of his predecessors during earlier races, but there were fewer economic incentives to do so. Because they usually weren't directly involved in the fisheries for their livelihood, owners of the racing schooners were less SEA HISTORY 82, AUTUMN 1997