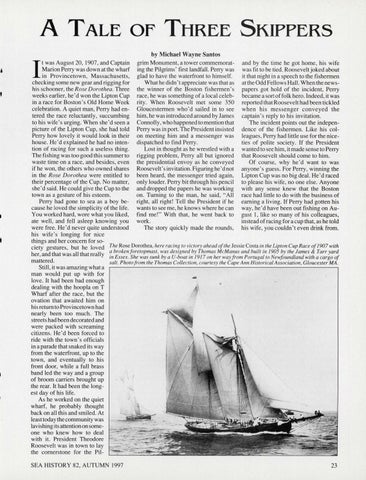 by Michael Wayne Santos t was August 20, 1907, and Captain grim Monument, a tower commemorat- and by the time he got home, his wife Marion Perry was down at the wharf ing the Pilgrims' first landfall. Perry was was fit to be tied. Roosevelt joked about in Provincetown, Massachusetts, glad to have the waterfront to himself. it that night in a speech to the fishermen checking some new gear and rigging for What he didn ' t appreciate was that as at the Odd Fellows Hall. When the newshis schooner, the Rose Dorothea. Three the winner of the Boston fishermen ' s papers got hold of the incident, Perry weeks earlier, he'd won the Lipton Cup race, he was something of a local celeb- became a sort of folk hero. Indeed, it was in a race for Boston's Old Home Week rity. When Roosevelt met some 350 reported that Roosevelt had been tickled celebration. A quiet man, Perry had en- Gloucestermen who'd sailed in to see when his messenger conveyed the tered the race reluctantly, succumbing him, he was introduced around by James captain's reply to his invitation. to his wife's urging. When she'd seen a Connolly, who happened to mention that The incident points out the indepenpicture of the Lipton Cup, she had told Perry was in port. The President insisted dence of the fishermen. Like his colPerry how lovely it would look in their on meeting him and a messenger was leagues, Perry had little use for the nicehouse. He'd explained he had no inten- dispatched to find Perry. ties of polite society. If the President tion of racing for such a useless thing. Lost in thought as he wrestled with a wanted to see him, it made sense to Perry The fishing was too good this summer to rigging problem, Perry all but ignored that Roosevelt should come to him. waste time on a race, and besides, even the presidential envoy as he conveyed Of course, why he'd want to was if he won, the others who owned shares Roosevelt's invitation. Figuring he'd not anyone's guess. For Perry, winning the in the Rose Dorothea were entitled to been heard, the messenger tried again, Lipton Cup was no big deal. He'd raced their percentage of the Cup. No matter, only louder. Perry bit through his pencil to please his wife, no one else. Anyone she'd said. He could give the Cup to the and dropped the papers he was working with any sense knew that the Boston town as a gesture of his esteem. on. Turning to the man, he said, "All race had little to do with the business of Perry had gone to sea as a boy be- right, all right! Tell the President if he earning a Jiving. If Perry had gotten his cause he loved the simplicity of the life. wants to see me, he knows where he can way, he'd have been out fishing on AuYou worked hard, wore what you liked, find me! " With that, he went back to gust I , like so many of his colleagues, ate well, and fell asleep knowing you work. instead of racing for a cup that, as he told The story quickly made the rounds, his wife, you couldn't even drink from. were free. He'd never quite understood his wife's longing for nice things and her concern for society gestures, but he loved The Rose Dorothea, here racing to victory ahead of the Jessie Costa in the Lipton Cup Race of 1907 with a brokenforetopmast, was designed by Thomas McManus and built in 1905 by the James & Tarr yard her, and that was all that really in Essex. She was sunk by a U-boat in 1917 on her way from Portugal to Newfoundland with a cargo of mattered. salt. Photo from the Thomas Collection, courtesy the Cape Ann Historical Association, Gloucester MA. Still, it was amazing what a man would put up with for love. It had been bad enough dealing with the hoopla on T Wharf after the race, but the ovation that awaited him on his return to Provincetown had nearly been too much. The streets had been decorated and were packed with screaming citizens. He'd been forced to ride with the town's officials in a parade that snaked its way from the waterfront, up to the town, and eventually to his front door, while a full brass band Jed the way and a group of broom carriers brought up the rear. It had been the longest day of his life. As he worked on the quiet wharf, he probably thought back on all this and smiled. At least today the community was lavishing its attention on someone who knew how to deal with it. President Theodore Roosevelt was in town to lay the cornerstone for the Pil-