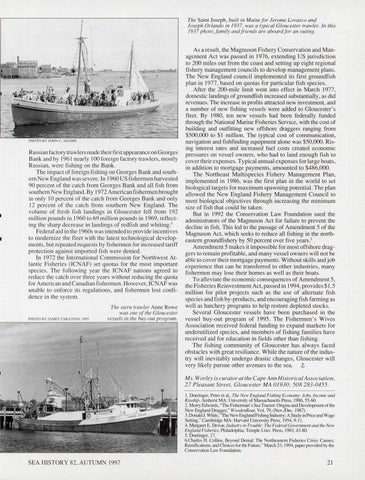 The Saint Joseph , built in Maine for Jerome Lovasco and . Joseph Orlando in 1937, was a typical Gloucester trawler. Jn this 1937 photo.family and friends are aboard for an outmg .

Russian factory trawlers made their first appearance on Georges Bank and by 1961 nearly 100 foreign factory trawlers, mostly Russian, were fishing on the Bank. The impact of foreign fishing on Georges Bank and southern New England was severe. In 1960 US fishermen harvested 90 percent of the catch from Georges Bank and all fish from southern New England. By 1972 American fishermen brought in only 10 percent of the catch from Georges Bank and only 12 percent of the catch from southern New England. The volume of fresh fish landings in Gloucester fell from 192 million pounds in 1960 to 69 million pounds in 1969, reflecting the sharp decrease in landings of redfish and whiting. 5 Federal aid in the 1960s was intended to provide incentives to modernize the fleet with the latest technological developments, but repeated requests by fishermen for increased tariff protection against imported fish were denied. In 1972 the International Commission for Northwest Atlantic Fisheries (ICNAF) set quotas for the most important species. The following year the ICNAF nations agreed to reduce the catch over three years without reducing the quota for American and Canadian fishermen. However, ICNAF was unable to enforce its regulations, and fishermen lost confidence in the system. The stern trawler Anne Rowe was one of the Gloucester vessels in the buy-out program.

As a result, the Magnuson Fishery Conservation and Management Act was passed in 1976, extending US jurisdiction to 200 miles out from the coast and setting up eight regional fishery management councils to develop managemen~ plans. The New England council implemented its first groundfish plan in 1977, based on quotas for particular fish species. After the 200-mile limit went into effect in March 1977, domestic landings of groundfish increased substantially, as did revenues. The increase in profits attracted new investment, and a number of new fishing vessels were added to Gloucester&#39;s fleet. By 1980, ten new vessels had been federally funded through the National Marine Fisheries Service, with the cost of building and outfitting new offshore draggers ranging from $500,000 to $1 million. The typical cost of communication, navigation and fishfinding equipment alone was $50,000. Rising interest rates and increased fuel costs created economic pressures on vessel owners, who had to land enough fish to cover their expenses. Typical annual expenses for large boats, in addition to mortgage payments, amounted to $486,000. The Northeast Multispecies Fishery Management Plan, implemented in 1986, was the first plan in the world to set biological targets for maximum spawning potential. The plan allowed the New England Fishery Management Council to meet biological objectives through increasing the minimum size of fish that could be taken. But in 1992 the Conservation Law Foundation sued the administrators of the Magnuson Act for failure to prevent the decline in fish. This led to the passage of Amendment 5 of the Magnuson Act, which seeks to reduce all fishing in the northeastern groundfishery by 50 percent over five years. 5 Amendment 5 makes it impossible for most offshore draggers to remain profitable, and many vessel owners will not be able to cover their mortgage payments. Without skills and job experience that can be transferred to other industries, many fishem&#39;len may lose their homes as well as their boats. To alleviate the economic consequences of Amendment 5, the Fisheries Reinvestment Act, passed in 1994, provides $1.5 million for pilot projects such as the use of alternate fish species and fish by-products, and encouraging fish farming as well as hatchery programs to help restore depleted stocks. Several Gloucester vessels have been purchased in the vessel buy-out program of 1995. The Fishermen&#39;s Wives Association received federal funding to expand markets for underutilized species, and members of fishing families have received aid for education in fields other than fishing. The fishing community of Gloucester has always faced obstacles with great resiliance. While the nature of the industry will inevitably undergo drastic changes, Gloucester will very likely pursue other avenues to the sea. ,t Ms. Worley is curator at the Cape Ann Historical Association,