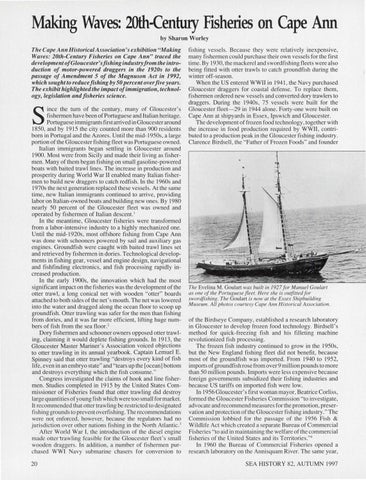 The Cape Ann HistoricalAssociation's exhibition "Making Waves: 20th-Century Fisheries on Cape Ann" traced the development ofGloucester'sfishing industry from the introduction of motor-powered draggers in the 1920s to the passage of Amendment 5 of the Magnuson Act in 1992, which sought to reduce fishing by 50 percent over five years. The exhibit highlighted the impact of immigration, technology, legislation and fisheries science.

ince the tum of the century, many of Gloucester 's fishermen have been of Portuguese and Italian heritage. Portuguese immigrants first arrived in Gloucester around 1850, and by 1915 the city counted more than 900 residents born in Portugal and the Azores. Until the mid- l 950s, a large portion of the Gloucester fishing fleet was Portuguese owned. Italian immigrants began settling in Gloucester around 1900. Most were from Sicily and made their living as fishermen. Many of them began fishing on small gasoline-powered boats with baited trawl lines. The increase in production and prosperity during World War II enabled many Italian fishermen to build .new draggers to catch redfish. In the 1960s and 1970s the next generation replaced these vessels. At the same time, new Italian immigrants continued to arrive, providing labor on Italian-owned boats and building new ones. By 1980 nearly 50 percent of the Gloucester fleet was owned and operated by fishermen of Italian descent. 1 In the meantime, Gloucester fisheries were transformed from a labor-intensive industry to a highly mechanized one. Until the mid-1920s, most offshore fishing from Cape Ann was done with schooners powered by sail and auxiliary gas engines. Groundfish were caught with baited trawl lines set and retrieved by fishermen in dories. Technological developments in fishing gear, vessel and engine design, navigational and fishfinding electronics, and fish processing rapidly increased production. In the early 1900s, the innovation which had the most significant impact on the fisheries was the development of the otter trawl , a long conical net with wooden "otter" boards attached to both sides of the net's mouth. The net was lowered into the water and dragged along the ocean floor to scoop up groundfish. Otter trawling was safer for the men than fishing from dories, and it was far more efficient, lifting huge numbers of fish from the sea floor. 2 Dory fishermen and schooner owners opposed otter trawling, claiming it would deplete fishing grounds. In 1913, the Gloucester Master Mariner's Association voiced objections to otter trawling in its annual yearbook. Captain Lemuel E. Spinney said that otter trawling "destroys every kind of fish life, even in an embryo state" and "tears up the [ocean] bottom and destroys everything which the fish consume." Congress investigated the claims of hook and line fishermen. Studies completed in 1915 by the United States Commissioner of Fisheries found that otter trawling did destroy large quantities of young fish which were too small for market. It recommended that otter trawling be restricted to designated fishing grounds to prevent overfishing. The recommendations were not. enforced, however, because the regulators had no jurisdiction over other nations fishing in the North Atlantic. 3 After World War I, the introduction of the diesel engine made otter trawling feasible for the Gloucester fleet's small wooden draggers. In addition, a number of fishermen purchased WWI Navy submarine chasers for conversion to 20

fishing vessels. Because they were relatively inexpensive, many fishermen could purchase their own vessels for the first time. By 1930, the mackerel and swordfishing fleets were also being fitted with otter trawls to catch groundfish during the winter off-season. When the US entered WWII in 1941, the Navy purchased Gloucester draggers for coastal defense. To replace them , fishermen ordered new vessels and converted dory trawlers to draggers. During the 1940s, 75 vessels were built for the Gloucester fleet-29 in 1944 alone. Forty-one were built on Cape Ann at shipyards in Essex, Ipswich and Gloucester. The development of frozen food technology, together with the increase in food production required by WWII, contributed to a production peak.in the Gloucester fishing industry. Clarence Birdsell , the "Father of Frozen Foods" and founder

The Evelina M. Goulart was built in 1927 for Manuel Goulart as one of the Portuguese fleet. Here she is outfitted/or swordfishing. The Goulart is now at the Essex Shipbuilding Museum. All photos courtesy Cape Ann Historical Association.

of the Birdseye Company, established a research laboratory in Gloucester to develop frozen food technology . Birdsell 's method for quick-freezing fish and his filleting machine revolutionized fish processing. The frozen fish industry continued to grow in the I 950s, but the New England fishing fleet did not benefit, because most of the groundfish was imported. From 1940 to 1952, imports of groundfish rose from over 9 million pounds to more than 50 million pounds. Imports were less expensive because foreign governments subsidized their fishing industries and because US tariffs on imported fish were low. In 1956 Gloucester's first woman mayor, Beatrice Corliss, formed the Gloucester Fisheries Commission "to investigate, advocate and recommend measures for the promotion, preservation and protection of the Gloucester fishing industry." The Commission lobbied for the passage of the I 956 Fish & Wildlife Act which created a separate Bureau of Commercial Fisheries "to aid in maintaining the welfare of the commercial fisheries of the United States and its Territories."4 In 1960 the Bureau of Commercial Fi sheries opened a research laboratory on the Annisquam River. The same year, SEA HISTORY 82, AUTUMN 1997