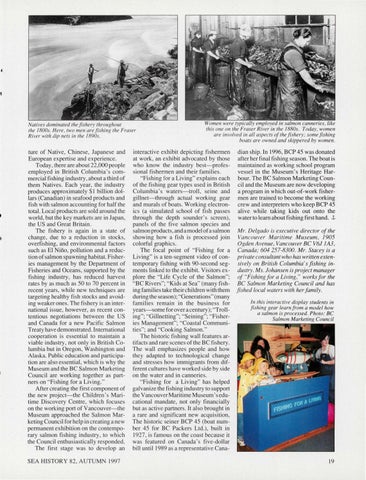 Natives dominated the fishery throughout the 1800s. Here, two men are fishing the Fraser River with dip nets in the 1890s.

ture of Native, Chinese, Japanese and European expertise and experience. Today, there are about 22,000 people employed in British Columbia's commercial fishing industry, about a third of them Natives. Each year, the industry produces approximately $ 1 billion dollars (Canadian) in seafood products and fi sh with salmon accounting for half the total. Local products are sold around the world, but the key markets are in Japan , the US and Great Britain. The fishery is again in a state of change, due to a reduction in stocks, overfishing, and environmental factors such as El Nifio , pollution and a reduction of salmon spawning habitat. Fisheries management by the Department of Fisheries and Oceans, supported by the fi shing industry, has reduced harvest rates by as much as 50 to 70 percent in recent years, while new techniques are targeting healthy fish stocks and avoiding weaker ones. The fi shery is an international issue, however, as recent contentious negotiations between the US and Canada for a new Pacific Salmon Treaty have demonstrated. International cooperation is essential to maintain a viable industry, not only in British Columbia but in Oregon, Washington and Alaska. Public education and participation are also essential, which is why the Museum and the BC Salmon Marketing Council are working together as partners on "Fishing for a Living." After creating the first component of the new project-the Children 's Maritime Discovery Centre, which focuses on the working port of Vancouver-the Museum approached the Salmon Marketing Council for help in creating a new permanent exhibition on the contemporary salmon fishing industry, to which the Council enthusiastically responded. The first stage was to develop an SEA HISTORY 82, AUTUMN 1997

Women were typically employed in salmon canneries, like this one on the Fraser River in the 1880s. Today, women are involved in all aspects of the fishery; some fishing boats are owned and skippered by women.

interactive exhibit depicting fishermen at work, an exhibit advocated by those who know the industry best-professional fishermen and their families. "Fishing for a Living" explains each of the fishing gear types used in British Columbia's waters-troll , sei ne and gillnet-through actual working gear and mural s of boats. Working electronics (a simulated school of fish passes through the depth sounder's screen), panels of the five salmon species and salmon products, and a model of a salmon showing how a fish is processed join colorful graphics. The focal point of "Fishing for a Living" is a ten-segment video of contemporary fishing with 90-second segments linked to the exhibit. Visitors explore the "Life Cycle of the Salmon"; "BC Rivers"; "Kids at Sea" (many fishing families take their children with them during the season); "Generations" (many families rem ain in the bu siness for years-some for over a century); "Trolling"; "Gillnetting"; "Sei ning"; "Fisheries Management"; "Coastal Communities"; and "Cooking Salmon." The hi storic fishing wall features artifacts and rare scenes of the BC fishery. The wall emphasizes people and how they adapted to technological change and stresses how immigrants from differe nt cultures have worked side by side on the water and in canneries. "Fishing for a Living" has helped galvanize the fi shing industry to support the Vancouver Maritime Museum 'seducational mandate, not only financially but as active partners. It also brought in a rare and significant new acquisition, The historic seiner BCP 45 (boat number 45 for BC Packers Ltd.), built in 1927, is famous on the coast because it was featured on Canada's five-dollar bill until 1989 as a representative Cana-

dian ship. In 1996, BCP 45 was donated after her final fishing season. The boat is maintained as working school program vessel in the Museum 's Heritage Harbour. The BC Salmon Marketing Council and the Museum are now developing a program in which out-of-work fishermen are trained to become the working crew and interpreters who keep BCP 45 alive while taking kids out onto the water to learn about fishing first hand. ,t Mr. Delgado is executive director of the Va ncouver Maritime Museum, 1905 Ogden Avenue, Vancouver BC V6J JA3 , Canada; 604 257-8300. Mr. Stacey is a private consultant who has written extensively on British Columbia's fishing industry. Ms. Johansen is project manager of "Fishing for a Living," works for the BC Salmon Marketing Council and has fished local waters with her family . In this interactive display students in fishing gear learn from a model how a salmon is processed. Photo: BC Salmon Marketing Council