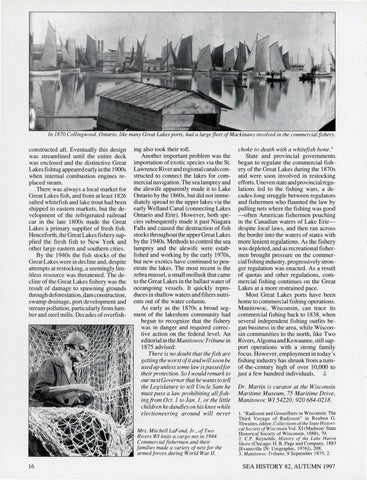 In 1870 Collingwood, Ontario, like many Great Lakes ports , had a large fleet of Mackinaws involved in the commercial fishery.

constructed aft. Eventually this design was streamlined until the entire deck was enclosed and the distinctive Great Lakes fish tug appeared early in the 1900s when internal combustion engines replaced steam. There was always a local market for Great Lakes fish, and from at least 1826 salted whitefish and lake trout had been shipped to eastern markets, but the development of the refrigerated railroad car in the late 1800s made the Great Lakes a primary supplier of fresh fish. Henceforth, the Great Lakes fishery supplied the fresh fish to New York and other large eastern and southern cities. By the 1940s the fish stocks of the Great Lakes were in decline and, despite attempts at restocking, a seemingly limitless resource was threatened. The decline of the Great Lakes fishery was the result of damage to spawning grounds through deforestation, dam construction, swamp drainage, port development and stream pollution, particularly from lumber and steel mills. Decades of overfish-

ing also took their toll. Another important problem was the importation of exotic species via the St. Lawrence River and regional canals constructed to connect the lakes for commercial navigation. The sea lamprey and the alewife apparently made it to Lake Ontario by the 1860s, but did not immediately spread to the upper lakes via the early Welland Canal (connecting Lakes Ontario and Erie). However, both species subsequently made it past Niagara Falls and caused the destruction of fish stocks throughout the upper Great Lakes by the 1940s. Methods to control the sea lamprey and the alewife were established and working by the early 1970s, but new exotics have continued to penetrate the lakes. The most recent is the zebra mussel, a small mollusk that came to the Great Lakes in the ballast water of oceangoing vessels. It quickly reproduces in shallow waters and filters nutrients out of the water column. As early as the 1870s a broad segment of the lakeshore community had begun to recognize that the fishery was in danger and required corrective action on the federal level. An editorial in the Manitowoc Tribune in 1875 advised: There is no doubt that the fish are getting the worst ofit and will soon be used up unless some law is passedfor their protection. So I would remark to our next Governor that he wants to tell the Legislature to tell Uncle Sam he must pass a law prohibiting all fishing from Oct. 1 to Jan . 1, or the little children he dandles on his knee while electioneering around will never Mrs. Mitchell LaFond, Jr., of Two Rivers WI knits a cargo net in 1944. Commercial fish ermen and their families made a variety of nets for the armed for ces during World War II.

choke to death with a whitefish bone. 3 State and provincial governments began to regulate the commercial fishery of the Great Lakes during the 1870s and were soon involved in restocking efforts. Uneven state and provincial regulations led to the fishing wars, a decades-long struggle between regulators and fishermen who flaunted the law by pulling nets where the fishing was good --often American fishermen poaching in the Canadian waters of Lake Eriedespite local laws, and then ran across the border into the waters of states with more lenient regulations. As the fishery was depleted, and as recreational fishermen brought pressure on the commercial fishing industry, progressively stronger regulation was enacted. As a result of quotas and other regulations, commercial fishing continues on the Great Lakes at a more restrained pace. Most Great Lakes ports have been home to commercial fishing operations. Manitowoc, Wisconsin, can trace its commercial fishing back to 1838, when several independent fishing outfits began business in the area, while Wisconsin communities to the north, like Two Rivers, Algoma and Kewaunee, still support operations with a strong family focus. However, employment in today 's fishing industry has shrunk from a turnof-the-century high of over 10,000 to just a few hundred individuals. ..t Dr. Martin is curator at the Wisconsin Maritime Museum , 75 Maritime Drive, Manitowoc WI 54220; 920 684-0218. l. "Radisson and Groseilliers in Wisconsin: The Third Voyage of Radisson " in Reuben G. Thwaites, editor, Collections of the State Historical Society of Wisconsin Vol. XI (Madison: State Historical Society of Wi sconsin, 1888), 70. 2. C.P. Reynolds, History of the Lake Huron Shore (Chicago: H. R. Page and Company, 1883 [Evansville IN: Unigraphic, 1976]), 208. 3. Manitowoc Tribun e, 9 September 1875, 2.