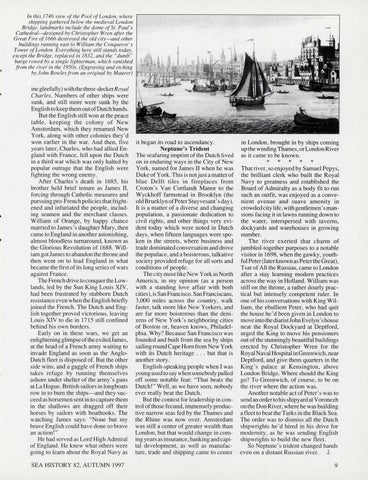 In this 1746 view of the Pool of London , where shipping gathered he/ow the medieval London Bridge, landmarks include the dome of St. Paul' s Cathedral--designed hy Christopher Wren after the Great Fire of 1666 destroyed the old city-and other buildings running east to William the Conqueror's Tower of London . Everything here still stands today , except the Bridge, replaced in 1832 , and the "dumb" barge rowed hy a single lighterman, which vanished from the river in the 1950s. (ÂŁ.ngraving and etching hy John Bowles from an original by Maurer)

ine gleeful! y) with the three-decker Royal Charles. Numbers of other ships were sunk, and still more were sunk by the English to keep them out of Dutch hands. But the English still won at the peace table , keeping the colony of New Amsterdam, which they renamed New York, along with other colonies they'd won earlier in the war. And then , five years later, Charles, who had allied England with France, fell upon the Dutch in a third war which was only halted by popular outrage that the English were fighting the wrong enemy. After Charles's death in 1685, his brother held brief tenure as James II, forcing through Catholic measures and pursuing pro-French policies that frightened and infuriated the people, including seamen and the merchant classes. William of Orange, by happy chance married to James' s daughter Mary , then came to England in another astonishing, almost bloodless turnaround, known as the Glorious Revolution of 1688. William got James to abandon the throne and then went on to lead England in what became the first of its long series of wars against France. The French drive to conquerthe Lowlands, led by the Sun King Louis XIV, had been frustrated by stubborn Dutch resistance even when the English briefly joined the French. The Dutch and English together proved victorious, leaving Louis XIV to die in 1715 still confined behind his own borders. Early on in these wars, we get an enlightening glimpse of the exiled James, at the head of a French army waiting to invade England as soon as the AngloDutch fleet is disposed of. But the other side wins, and a gaggle of French ships takes refuge by running themselves ashore under shelter of the army's guns at La Hogue. British sailors in longboats row in to bum the ships-and they succeed as horsemen sent in to capture them in the shallows are dragged off their horses by sailors with boathooks. The watching James says: "None but my brave English could have done so brave an action!" He had served as Lord High Admiral of England. He knew what others were going to learn about the Royal Navy as SEA HISTORY 82, AUTUMN 1997

it began its road to ascendancy. Neptune's Trident The seafaring imprint of the Dutch Ii ved on in enduring ways in the City of New York, named for James II when he was Duke of York. This is not just a matter of blue Delft tiles in fireplaces from Croton's Van Cortlandt Manor to the Wyckhoff farmstead in Brooklyn (the old Brueklyn of Peter Stuyvesant's day). It is a matter of a diverse and changing population, a passionate dedication to civil rights, and other things very evident today which were noted in Dutch days, when fifteen languages were spoken in the streets, where business and trade dominated conversation and drove the populace, and a boisterous, talkative society provided refuge for all sorts and conditions of people. The city most like New York in North America, in my opinion (as a person with a standing love affair with both cities), is San Francisco. San Franciscans, 3,000 miles across the country, walk faster, talk more like New Yorkers, and are far more boi sterous than the denizens of New York's neighboring cities of Boston or, heaven knows, Philadelphia. Why? Because San Francisco was founded and built from the sea by ships sailing round Cape Hom from New York with its Dutch heritage ... but that is another story. English-speaking people when I was young used to say when somebody pulled off some notable feat: "That beats the Dutch! " Well, as we have seen, nobody ever really beat the Dutch. But the contest for leadership in control of those fecund, immense! y productive narrow seas fed by the Thames and the Rhine was now over. Amsterdam was still a center of greater wealth than London, but that would change in coming years as insurance, banking and capital development, as well as manufacture, trade and shipping came to center

in London, brought in by ships coming up the winding Thames, or London River as it came to be known.

That river, so enjoyed by Samuel Pepys, the brilliant clerk who built the Royal Navy to greatness and established the Board of Admiralty as a body fit to run such an outfit, was enjoyed as a convenient avenue and suave amenity in crowded city life, with gentlemen's mansions facing it in lawns running down to the water, interspersed with taverns, dockyards and warehouses in growing number. The river exerted that charm of jumbled-together purposes to a notable visitor in 1698, when the gawky, youthful Peter (later known as Peter the Great), Tsar of All the Russias, came to London after a stay learning modem practices across the way in Holland. William was still on the throne, a rather dourly practical but intensely competent ruler. In one of his conversations with King William, the ebullient Peter, who had quit the house he 'd been given in London to move into thediaristJohn Evelyn's house near the Royal Dockyard at Deptford, urged the King to move his pensioners out of the stunningly beautiful buildings erected by Christopher Wren for the Royal Na val Hospital in Greenwich, near Deptford, and give them quarters in the King' s palace at Kensington, above London Bridge. Where should the King go? To Greenwich, of course, to be on the river where the action was. Another notable act of Peter's was to send an order to his shipyard at Voronezh on the Don River, where he was building a fleet to beat the Turks in the Black Sea. The order was to dismiss all the Dutch shipwrights he 'd hired in his drive for modernity, as he was sending English shipwrights to build the new fleet. So Neptune's trident changed hands even on a distant Russian river. .t