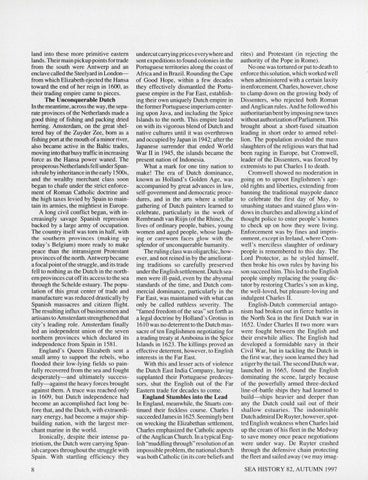 land into these more primitive eastern lands. Their main pickup points fortrade from the south were Antwerp and an enclave called the Steelyard in Londonfrom which Elizabeth ejected the Hansa toward the end of her reign in 1600, as their trading empire came to pieces. The Unconquerable Dutch In the meantime, across the way, the separate provinces of the Netherlands made a good thing of fishing and packing dried herring. Amsterdam, on the great sheltered bay of the Zuyder Zee, born as a fishing port at the mouth of a minor river, also became active in the Baltic trades, moving into that busy traffic in increasing force as the Hansa power waned. The prosperous Netherlands fell under Spanish rule by inheritance in the early 1500s, and the wealthy merchant class soon began to chafe under the strict enforcement of Roman Catholic doctrine and the high taxes levied by Spain to maintain its armies, the mightiest in Europe. A long civil conflict began, with increasingly savage Spanish repression backed by a large army of occupation. The country itself was tom in half, with the southern provinces (making up today's Belgium) more ready to make peace than the intransigent Protestant provinces of the north. Antwerp became a focal point of the struggle, and its trade fell to nothing as the Dutch in the northern provinces cut off its access to the sea through the Scheide estuary. The population of this great center of trade and manufacture was reduced drastically by Spanish massacres and citizen flight. The resulting influx of businessmen and artisans to Amsterdam strengthened that city's leading role. Amsterdam finally led an independent union of the seven northern provinces which declared its independence from Spain in 1581. England's Queen Elizabeth sent a small army to support the rebels, who flooded their low-lying fields so painfully recovered from the sea and fought desperately-and ultimately successfully-against the heavy forces brought against them. A truce was reached only in 1609, but Dutch independence had become an accomplished fact long before that, and the Dutch, with extraordinary energy, had become a major shipbuilding nation, with the largest merchant marine in the world. Ironically, despite their intense patriotism, the Dutch were carrying Spanish cargoes throughout the struggle with Spain. With startling efficiency they 8

undercut carrying prices everywhere and sent expeditions to found colonies in the Portuguese territories along the coast of Africa and in Brazil. Rounding the Cape of Good Hope, within a few decades they effectively dismantled the Portuguese empire in the Far East, establishing their own uniquely Dutch empire in the former Portuguese imperium centering upon Java, and including the Spice Islands to the north. This empire lasted on with its vigorous blend of Dutch and native cultures until it was overthrown and occupied by Japan in 1942; after the Japanese surrender that ended World War II in 1945, the islands became the present nation of Indonesia. What a mark for one tiny nation to make! The era of Dutch dominance, known as Holland's Golden Age, was accompanied by great advances in law , self-government and democratic procedures, and in the arts where a stellar gathering of Dutch painters learned to celebrate, particularly in the work of Rembrandt van Riijn (of the Rhine), the lives of ordinary people, babies, young women and aged people, whose laughing or careworn faces glow with the splendor of unconquerable humanity . The ruling class was oligarchic, however, and not reined in by the ameliorating traditions so carefully preserved underthe English settlement. Dutch seamen were ill-paid, even by the abysmal standards of the time, and Dutch commercial dominance, particularly in the Far East, was maintained with what can only be called ruthless severity. The "famed freedom of the seas" set forth as a legal doctrine by Holland 's Grotius in 1610 was no deterrent to the Dutch massacre of ten Englishmen negotiating for a trading treaty at Amboina in the Spice Islands in 1623. The killings proved an effective deterrent, however, to English interests in the Far East. With this and lesser acts of violence the Dutch East India Company, having supplanted their Portuguese predecessors, shut the English out of the Far Eastern trade for decades to come. England Stumbles into the Lead In England, meanwhile, the Stuarts continued their feckless course. Charles I succeeded Jam es in 1625. Seemingly bent on wrecking the Elizabethan settlement, Charles emphasized the Catholic aspects of the Anglican Church. In a typical English "muddling through" resolution of an impossible problem, the national church was both Catholic (in its core beliefs and

rites) and Protestant (in rejecting the authority of the Pope in Rome) . No one was tortured or put to death to enforce this solution, which worked well when administered with a certain laxity in enforcement. Charles, however, chose to clamp down on the growing body of Dissenters, who rejected both Roman and Anglican rules. And he followed his authoritarian bent by imposing new taxes without authorization of Parliament. This brought about a short-fused situation leading in short order to armed rebellion. The population avoided the mass slaughters of the religious wars that had been raging in Europe, but Cromwell, leader of the Dissenters, was forced by extremists to put Charles I to death. Cromwell showed no moderation in going on to uproot Englishmen's ageold rights and liberties, extending from banning the traditional maypole dance to celebrate the first day of May, to smashing statues and stained glass windows in churches and allowing a kind of thought police to enter people 's homes to check up on how they were living. Enforcement was by fines and imprisonment, except in Ireland, where Cromwell's merciless slaughter of ordinary people is remembered to this day. The Lord Protector, as he styled himself, then broke his own rules by having his son succeed him . This led to the English people simply replacing the young dictator by restoring Charles's son as king, the well-loved, but pleasure-loving and indulgent Charles II. English-Dutch commercial antagonism had broken out in fierce battles in the North Sea in the first Dutch war in 1652. Under Charles II two more wars were fought between the English and their erstwhile allies. The English had developed a formidable navy in their Civil War, but in tackling the Dutch in the first war, they soon learned they had a tiger by the tail. The second Dutch war, launched in 1665, found the English dominating the scene, largely because of the powerfully armed three-decked line-of-battle ships they had learned to build-ships heavier and deeper than any the Dutch could sail out of their shallow estuaries. The indomitable Dutch admiral De Ruyter, however, spotted English weakness when Charles laid up the cream of his fleet in the Medway to save money once peace negotiations were under way. De Ruyter crashed through the defensive chain protecting the fleet and sailed away (we may imagSEA HISTORY 82, AUTUMN 1997