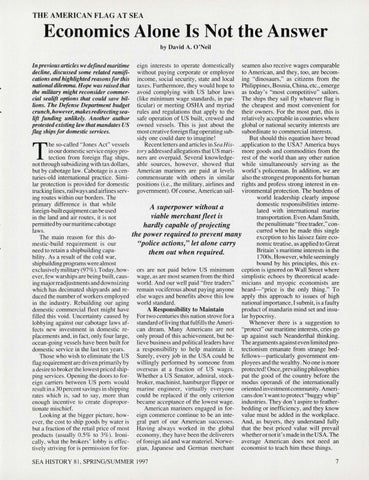 Economics Alone Is Not the Answer by David A. O&#39;Neil In previous articles we defined maritime decline, discussed some related ramifications and highlighted reasons for this national dilemma. Hope was raised that the military might reconsider commercial sealift options that could save billions. The Defense Department budget crunch, however, makes redirecting sealift funding unlikely. Another author protested existing law that mandates US flag ships for domestic services. he so-called &quot;Jones Act&quot; vessels in our domestic service enjoy protection from foreign flag ships, not through subsidizing with tax dollars, but by cabotage law. Cabotage is a centuries-old international practice. Similar protection is provided for domestic trucking lines, railways and airlines serving routes within our borders. The primary difference is that while foreign-builtequipmentcan be used in the land and air routes, it is not permitted by our maritime cabotage

raws. The main reason for this domestic-build requirement is our need to retain a shipbuilding capability. As a result of the cold war, shipbuilding programs were almost exclusively military (97% ). Today, however, few warships are being built, causing major readjustments and downsizing which has decimated shipyards and reduced the number of workers employed in the industry. Rebuilding our aging domestic commercial fleet might have filled this void. Uncertainty caused by lobbying against our cabotage laws affects new investment in domestic replacements and, in fact, only four large, ocean-going vessels have been built for domestic service in the last ten years. Those who wish to eliminate the US flag requirement are driven primarily by a desire to broker the lowest priced shipping serv ices. Opening the doors to foreign carriers between US ports wou ld result in a 30 percent savings in shipping rates which is, sad to say, more than enough incentive to create disproportionate mischief. Looking at the bigger picture, however, the cost to ship goods by water is but a fraction of the retail price of most products (usuall y 0.5 % to 3% ). Ironically, what the brokers &#39; lobby is effectively striving for is permission for for-

eign interests to operate domestically seamen also receive wages comparable without paying corporate or employee to American, and they, too, are becomincome, social security, state and local ing &quot;dinosaurs,&quot; as citizens from the taxes. Furthermore, they would hope to Philippines, Bosnia, China, etc., emerge avoid complying with US labor laws as today&#39;s &quot;most competitive&quot; sailors. (like minimum wage standards, in par- The ships they sail fly whatever flag is ticular) or meeting OSHA and myriad the cheapest and most convenient for rules and regulations that apply to the their owners. For the most part, this is safe operation of US built, crewed and relatively acceptable in countries where owned vessels. This is just about the global or national security interests are most creative foreign flag operating sub- subordinate to commercial interests. sidy one could dare to imagine! But should this equation have broad Recent letters and articles in Sea His- _application to the USA? America buys tory addressed allegations that US mari- more goods and commodities from the ners are overpaid. Several knowledge- rest of the world than any other nation able sources, however, showed that while simultaneously serving as the American mariners are paid at levels world&#39;s policeman. In addition, we are commensurate with others in similar also the strongest proponents for human positions (i.e., the military, airlines and rights and profess strong interest in engovernment). Of course, American sail- vironmental protection. The burdens of world leadership clearly impose domestic responsibilities interreA superpower without a lated with international marine viable merchant fleet is transportation. Even Adam Smith, the penultimate &quot;free trader,&quot; conhardly capable of projecting curred when he made this single the power required to prevent many exception to his laissez faire eco&quot;police actions,&quot; let alone carry nomic treatise, as applied to Great Britain&#39;s maritime interests in the them out when required. 1700s. However, while seemingly bound by his principles, this exors are not paid below US minimum ception is ignored on Wall Street where wage, as are most seamen from the third simplistic echoes by theoretical acadeworld . And our well paid &quot;free traders&quot; micians and myopic economists are remain vociferous about paying anyone heard-&quot;price is the only thing.&quot; To else wages and benefits above this low apply this approach to Âˇ issues of high world standard. national importance, I submit, is a faulty product of mandarin mind set and insuA Responsibility to Maintain For two centuries this nation strove for a lar hypocrisy. standard ofliving that fulfills the AmeriWhenever there is a suggestion to can dream. Many Americans are not &quot;protect&quot; our maritime interests, cries go only proud of this achievement, but be- up against such Neanderthal thinking. lieve business and political leaders have The arguments against even limited proa responsibility to help maintain it. tectionism emanate from strange bedSurely, every job in the USA could be fellows-particularly government emwillingly performed by someone from ployees and the wealthy. No one is more overseas at a fraction of US wages. protected! Once, prevai I ing philosophies Whether a US Senator, admiral, stock- put the good of the country before the broker, machinist, hamburger flipper or modus operandi of the internationally marine engineer, virtually everyone oriented investment community. Americould be replaced if the only criterion cans don &#39;t want to protect &quot;buggy whip&quot; became acceptance of the lowest wage. industries. They don &#39; t aspire to featherAmerican mariners engaged in for- bedding or inefficiency, and they know eign commerce continue to be an inte- value must be added in the workplace. gral part of our American successes. And, as buyers , they understand fully Having always worked in the global that the best priced value will prevail economy, they have been the deliverers whetherornotit&#39;smade in the USA. The of foreign aid and war materiel. Norwe- average American does not need an gian, Japanese and German merchant economist to teach him these things.