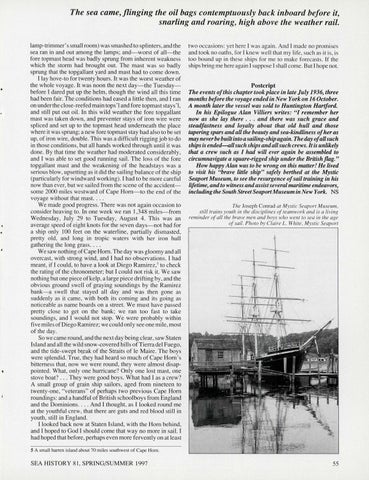 The sea came,flinging the oil bags contemptuously back inboard before it, snarling and roaring, high above the weather rail. lamp-trimmer's small room) was smashed to splinters, and the sea ran in and out among the lamps; and-worst of all-the fore topmast head was badly sprung from inherent weakness which the storm had brought out. The mast was so badly sprung that the topgallant yard and mast had to come down . I lay hove-to for twenty hours. It was the worst weather of the whole voyage. It was noon the next day-the Tuesdaybefore I dared put up the helm, though the wind all this time had been fair. The conditions had eased a little then, and I ran on under the close-reefed main tops ' land fore topmast stays 'l, and still put out oil. In this wild weather the fore topgallant mast was taken down, and preventer stays of iron wire were spliced and set up to the topmast head underneath the place where it was sprung; a new fore topmast stay had also to be set up, of iron wire, double. This was a difficult rigging job to do in those conditions, but all hands worked through until it was done. By that time the weather had moderated considerably, and I was able to set good running sail. The loss of the fore topgallant mast and the weakening of the headstays was a serious blow, upsetting as it did the sailing balance of the ship (particularly for windward working). I had to be more careful now than ever, but we sailed from the scene of the accidentsome 2000 miles westward of Cape Hom-to the end of the voyage without that mast. ... We made good progress. There was not again occasion to consider heaving to. In one week we ran 1,348 miles-from Wednesday, July 29 to Tuesday, August 4. This was an average speed of eight knots for the seven days-not bad for a ship only 100 feet on the waterline, partially dismasted , pretty old, and long in tropic waters with her iron hull gathering the long grass .... We saw nothing of Cape Hom. The day was gloomy and all overcast, with strong wind, and I had no observations. I had meant, if I could, to have a look at Diego Ramirez, 5 to check the rating of the chronometer; but I could not risk it. We saw nothing but one piece of kelp, a large piece drifting by, and the obvious ground swell of graying soundings by the Ramirez bank-a swell that stayed all day and was then gone as suddenly as it came, with both its coming and its going as noticeable as name boards on a street. We must have passed pretty close to get on the bank; we ran too fast to take soundings, and I would not stop. We were probably within five miles of Diego Ramirez; we could only see one mile, most of the day. So we came round, and the next day being clear, saw Staten Island and all the wild snow-covered hills of Tierra del Fuego, and the tide-swept bi:eak of the Straits of le Maire. The boys were splendid. True, they had heard so much of Cape Horn 's bitterness that, now we were round, they were almost disappointed. What, only one hurricane? Only one lost mast, one stove boat? ... They were good boys. What had I as a crew? A small group of grain ship sailors, aged from nineteen to twenty-one, "veterans" of perhaps two previous Cape Horn roundings: and a handful of British schoolboys from England and the Dominions .... And I thought, as I looked round me at the youthful crew, that there are guts and red blood still in youth, sti ll in England. I looked back now at Staten Island , with the Horn behind, and I hoped to God I should come that way no more in sail. I had hoped that before, perhaps even more fervently on at least

two occasions: yet here 1 was again. And 1 made no promises and took no oaths, for I knew well that my life, such as it is , is too bound up in these ships for me to make forecasts. If the ships bring me here again I suppose I shall come. But I hope not.

Postcript The eve!JtS ofthis chapter took place in late July 1936, three months before the voyage ended in New York on 16 October. A month later the vessel was sold to Huntington Hartford. Jn his Epilogue Alan Villiers writes: "1 remember her now as she lay there ... and there was such grace and steadfastness and loyalty about that old hull and those tapering spars and all the beauty and sea-kindliness of her as may never be built into a sailing-ship again. The day ofall such ships is ended-all such ships and all such crews. It is unlikely that a crew such as I had will ever again be assembled to circumnavigate a square-rigged ship under the British flag." How happy Alan was to be wrong on this matter! He lived to visit his "brave little ship" safely berthed at the Mystic Seaport Museum, to see the resurgence of sail training in his lifetime, and to witness and assist several maritime endeavors, including the South Street Seaport Museum in New York. NS The Joseph Conrad at Mystic Seaport Mus eum , still trains youth in the disciplines o.f teamwork and is a living reminder of all the brave men and boys who went to sea in the age of sail. Photo by Claire L. White, Mystic Seaport

5 A small barren island about 70 miles southwest of Cape Horn.