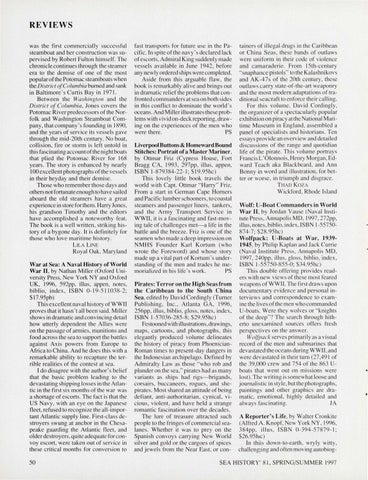 REVIEWS was the first commerc ially successful steamboat and her construction was supervi sed by Robert Fulton him self. The chronicle continues through the steamer era to the demi se of one of the most popular of the Potomac steamboats when the District of Columbia burned and sank in Baltimore's Curtis Bay in 197 1. Between the Washington and the District of Columbia, Jones covers the Potomac River predecessors of the Norfolk and W as hington Steamboat Company, that compan y's founding in 1890, and th.e years of service its vessels gave through the mid-20th century. No boat, collision, fire or storm is left untold in this fascinating account of the night boats that plied the Potomac River for 168 years. The story is enhanced by nearl y 100 excel lent photographs of the vessels in their heyday and their demi se. Those who remember those days and others not fortunate enough to have sailed aboard the o ld steamers have a great experience in store forthem. Harry Jones, hi s grandson Timothy and the editors have accomplished a noteworth y feat. The book is a we ll written , striking hi s. tory of a bygone day . It is definite ly for those who love maritime hi story. LILA LI E

Royal Oak , Maryland War at Sea: A Naval History of World War II, by Nathan Miller (Oxford Uni versity Press, New York NY and Oxford UK, 1996, 592pp, illus, appen, notes, biblio , index, ISBN 0-19-511038-2; $ 17.95pb) Thi s excellent naval hi story of WWII proves that it hasn ' t all been said . Mill er shows in dramatic and convinc ing detail how utterly de pendent the Allies were on the passage of armies, muniti ons and food across the sea to support the battles against Axis powers from Europe to Africa to China. And he does thi s with a remarkable ability to recapture the terrible realities of the contest at sea. I do disagree with the author ' s belief that the basic problem leading to the devastating shipping losses in the Atlantic in the first six month s of the war was a shortage of escorts. The fact is that the US Navy, with an eye on the Japanese fleet, refu sed to recogni ze the all-important Atlantic suppl y line. First-class destroye rs sw ung at anchor in the Chesapeake guarding the Atlantic fl eet, and older destroyers , quite adequate for convoy escort, were taken out of service in these critical month s for conve rsion to 50

fast transports for future use in the Pacific . In spite of the navy's declared lack o f escorts, Admiral King suddenl y made vessels available in June 1942, before any newl y ordered ships were completed. Aside from thi s arguable flaw , the book is remarkably ali ve and brings out in dramati c re li ef the problems that confronted commande rs at sea on both sides in this conflict to dominate the world ' s oceans. And Mi I!er i11 ustrates these problems with vivid on-deck reporting, drawing on the ex periences of the men who were there. PS Liverpool Buttons & Homeward Bound Stitches: Portrait of a Master Mariner, by Ottmar Friz (Cypress House, Fort Bragg CA, 1993 , 297 pp, illus, appen, ISBN 1-879384-22- 1; $ 19 .95hc) Thi s lovely little book travels the world wi th Capt. Ottmar " Harry" Fri z. From a start in German Cape Homers and Pacific lumber schooners, to coastal steamers and passenger liners, tankers, and the Army Transport Service in WWII , it is a fasc inating and fast-moving tale of challenges met- a life in the battle and the breeze. Friz is one of the seamen w ho made a deep impress ion on NMHS Founder Karl Kortum (w ho wrote the Foreword) and whose story made up a v ital part of Kortum 's understanding of the men and trades he mePS moriali zed in hi s life's wo rk. Pirates: Terror on the High Seas from the Caribbean to the South China Sea, edited by Dav id Cordingly (Turner Publi shing, Inc., Atlanta GA, 1996, 256pp, illus, biblio, g loss, notes , index, ISBN 1-57036-285-8; $29.95 hc) Festooned with i11 ustrations, drawings, maps, cartoons, and photographs, this elegantly produced volume delineates the hi story of piracy from Phoenic ianRoman times to present-day dangers in the Indonesian archipe lago. Defined by Admiralty Law as those "who rob and plunder on the sea," pirates had as many variants as ships had ri gs-bri gands, corsairs, buccaneers, rogues , and shepirates. Most shared an attitude of be ing defiant, anti-authoritarian , cy nica l, vic ious, violent, and have he ld a strange romantic fasc ination over the decades. The lure of treasure attracted such people to the fringes of commercia l sealanes. Whether it was to prey on the Spanish convoys carrying ew World silver and go ld or the cargoes of spices and jewels from the Near East, or con-

tainers of ill egal drugs in the Caribbean or China Seas, these bands of outl aws we re unifo rm in their code of vio lence and camaraderi e . From 15th-century "snaphance pi stols" to the Kalas hnikovs and AK-47s of the 20th century, these outl aws carry state-of-the-art weaponry and the most modern adaptati ons of traditi onal seacraft to enforce their calling. For thi s volume, David Cord ing ly, the organi zer of a spectacu larly popular exh ibition on piracy atthe ational Maritime Museum in E ng land, assembl ed a panel of speciali sts and hi storians. Ten essays provide an overv iew and detailed d iscussions of the range and quotidian life of the pirate. Th is vo lume portrays Francis L'Olonnois , Henry Morgan , Edwa rd Teach aka Blackbeard, and A nn Bonny in word and illu stration, for better or worse, in triumph and disgrace. THAD KOZA

Wickford , Rhode Island Wolf: U-Boat Commanders in World War II, by Jordan Vause (Nava l Institute Press, A nnapoli s MD , 1997, 272pp, illus, notes, biblio, index, ISB N 1-55750874-7; $28.95 hc) Wolfpack: U-Boats at War, 19391945, by Philip Kaplan and Jack Currie ( ava l In stitute Press , Annapoli s MD, 1997, 240pp , illus , gloss, biblio, index , ISBN 1-55750-855-0; $34.95hc) Th is double offering provides readers with new views of these most fea red weapons of WWII. The first draws upon documentary ev idence and persona l interviews and correspondence to examine the lives of the men who commanded U-boats. We re they wo lves or " knights of the deep"? The search through hitherto unexam ined sources offers fres h perspectives on the answer. Wo/fiJack serves primarily as a visua l record of the men and submarines that devastated the oceans during WWII , and were devastated in their turn (27,49 1 of the 39,000 c rew and 754 of the 863 Uboats that went out on missions we re lost). The writing is somewhat loose and journali stic in style, but the photographs , pai ntings and other graphics are dramati c, emotional, highly detailed and always fascinating. JA