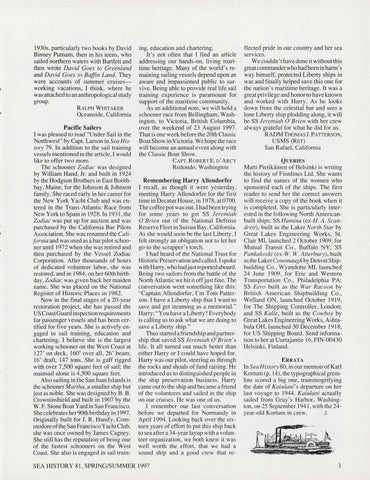 1930s, particularly two books by David Binney Putnam, then in his teens, who sailed northern waters with Bartlett and then wrote David Goes to Greenland and David Goes to Baffin Land. They were accounts of summer cruisesworking vacations, I think, where he was attached to an anthropological study group. RALPH WHITAKER Oceanside, California

Pacific Sailers I was pleased to read &quot;Under Sail in the Northwest&quot; by Capt. Larson in Sea History 79. In addition to the sail training vessels mentioned in the article, I would like to offer two more. The schooner Zodiac was designed by William Hand, Jr. and built in 1924 by the Hodgson Brothers in East Boothbay, Maine, for the Johnson &amp; Johnson family. She raced early in her career for the New York Yacht Club and was entered in the Trans-Atlantic Race from New York to Spain in 1928. In 1931, the Zodiac was put up for auction and was purchased by the California Bar Pilots Association. She was renamed the California and was used as a bar pilot schooner until 1972 when she was retired and then purchased by the Vessel Zodiac Corporation. After thousands of hours of dedicated volunteer labor, she was restored, and in 1984, on her 60th birthday, Zodiac was given back her maiden name. She was placed on the National Register of Historic Places in 1982. Now in the final stages of a 20-year restoration project, she has passed the US Coast Guard inspection requirements for passenger vessels and has been certified for five years. She is actively engaged in sail training, education and chartering. I believe she is the largest working schooner on the West Coast at 127&#39; on deck, 160&#39; over all , 26&#39; beam, 16 &#39; draft, 147 tons. She is gaff rigged with over 7,500 square feet of sail; the mainsail alone is 4,500 square feet. Also sailing in the San Juan Islands is the schooner Martha, a smaller ship but just as noble. She was designed by B. B. Crowninshield and built in 1907 by the W. F. Stone Boat Yard in San Francisco. She celebrates her 90th birthday in 1997. Originally built for J. R. Hanify, Commodore of the San Francisco Yacht Club, she was once owned by James Cagney. She still has the reputation of being one of the fastest schooners on the West Coast. She also is engaged in sail train-

ing, education and chartering. It&#39;s not often that I find an article addressing our hands-on, living maritime heritage. Many of the world &#39; s remaining sailing vessels depend upon an aware and impassioned public to survive. Being able to provide real life sail training experience is paramount for support of the maritime community. As an additional note, we will hold a schooner race from Bellingham, Washington , to Victoria, British Columbia, over the weekend of 23 August 1997. That is one week before the 20th Classic Boat Show in Yictoria. We hope the race will become an annual event along with the Classic Boat Show. CAPT. ROBERT E. D&#39;ARCY Redondo, Washington

Remembering Harry Allendorfer I recall, as though it were yesterday, meeting Harry Allendorfer for the first time in Decatur House, in 1978, at0700. The coffee pot was out. I had been trying for some years to get SS Jeremiah O&#39;Brien out of the National Defense Reserve Fleet in Suisun Bay, California. As she would soon be the last Liberty , I felt strongly an obligation not to let her go to the scrapper&#39;s torch. I had heard of the National Trust for Historic Preservation and called. I spoke with Harry, who had just reported aboard. Being two sailors from the battle of the North Atlantic we hit it off just fine. The conversation went something like this: &quot;Captain Allendorfer, I&#39;m Tom Patterson. I have a Liberty ship that I want to save and get steaming as a memorial.&quot; Harry: &quot;You have a Liberty? Everybody is calling us to ask what we are doing to save a Liberty ship.&quot; Thus started a friendship and partnership that saved SS Jeremiah 0 &#39; Brien&#39;s life. It all turned out much better than either Harry or I could have hoped for. Harry was our pilot, steering us through the rocks and shoals of fund raising. He introduced us to distinguished people in the ship preservation business. Harry came out to the ship and became a friend of the volunteers and sailed in the ship on our cruises. He was one of us. I remember our last conversation before we departed for Normandy in April 1994. Looking back over the sixteen years of effort to put this ship back to sea after a 34-year layup with a volunteer organization, we both knew it was well worth the effort, that we had a sound ship and a good crew that re-

fleeted pride in our country and her sea services. We couldn&#39;t have done it without this great commander who had been in harm&#39;s way himself, protected Liberty ships in war. and finally helped save this one for the nation &#39;s maritime heritage. It was a great privilege and honor to have known and worked with Harry. As he looks down from the celestial bar and sees a lone Liberty ship plodding along, it will be SS Jeremiah 0 &#39; Brien with her crew always grateful for what he did for us. RADM THOMAS J. PATTERSON, USMS (RET) San Rafael, California QUERIES

Matti Pietikainen of Helsinki is writing the history of Finn lines Ltd. She wants to find the names of the women who sponsored each of the ships. The first reader to send her the correct answers will receive a copy of the book when it is completed. She is particularly interested in the following North Americanbuilt ships: SS Hamina (ex-H. A . Scandrett) , built as the Laker North Star by Great Lakes Engineering Works , St. Clair MI, launched 2 October 1909, for Mutual Transit Co. , Buffalo NY; SS Pankakoski (ex-W. W. Atterbury) , built as the Laker Conemaugh by Detroit Shipbuilding Co. , Wyandotte MI, launched 24 June 1909, for Erie and Western Transportation Co., Philadelphia PA; SS Eero built as the War Racoon by British American Shipbuilding Co., Welland ON, launched October 1919, for The Shipping Controller, London; and SS Kalle, built as the Cowboy by Great Lakes Engineering Works, Ashtabula OH, launched 30 December 1918, for US Shipping Board. Send information to her at Uurtajantie 16, FIN-00430 Helsinki, Finland. ERRATA In Sea History 80, in our memoir of Karl Kortum (p. 14), the typographical gremlins scored a big one, transmogrifying the date of Kaiulani&#39;s departure on her last voyage to 1944. Kaiulani actually sailed from Gray&#39;s Harbor, Washington , on 25 September 1941, with the 24year-old Kortum in crew. J,