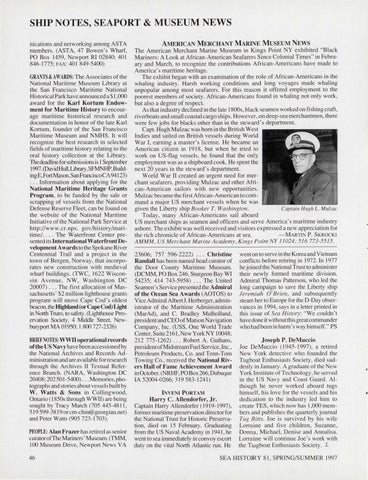 GRANTS &AWARDS: The Associates of the National Maritime Museum Library at the San Francisco Maritime National Historical Park have announced a $1 ,000 award for the Karl Kortum Endowment for Maritime History to encourage maritime historical research and documentation in honor of the late Karl Kortum, founder of the San Francisco Maritime Museum and NMHS . It will recognize the best research in selected fields of maritime history relating to the oral history collection at the Library. The deadline for submissions is 1 September 1997.(DavidHull,Library,SFMNHP,BuildingE,FortMason,SanFranciscoCA 94123) .. . Information about applying for the National Maritime Heritage Grants Program , to be funded by the sale or scrapping of vessels from the National Defense Reserve Fleet, can be found on the website of the National Maritime Initiative of the National Park Service at http://www.cr.nps. gov /history/maritime/.. .. The Waterfront Center presented its International Waterfront Development Awards to the Spokane River Centennial Trail and a project in the town of Bergen, Norway, that incorporates new construction with medieval wharf buildings. (TWC, 1622 Wi sconsin Avenue , NW , Washington DC 20007) ... The first allocation of Massachusetts ' $2 million lighthouse grants program will move Cape Cod ' s oldest beacon, the Highland (or Cape Cod) Light in North Truro, to safety. (Lighthouse Preservation Society, 4 Middle Street, Newburyport MA 01950; 1 800 727-2326)

BRIEF NOTES: WWII operational records of the US Navy have been accessioned by the National Archives and Records Administration and are available for research through the Archives II Textual Reference Branch. (NARA, Washington DC 20408; 202501-5400) ... Memories, photographs and stories about vessels built by W. Watts & Sons in Collingwood, Ontario ( 1850s through WWII) are being sought by Tracy March (705 445-4811, 519 599-3819 orcm-chin@georgian.net) and Peter Watts (905 723-1703). PEOPLE: Alan Frazer has retired as senior curatorofThe Mariners' Museum. (TMM, 100 Museum Drive, Newport News VA 46

AMERICAN MERCHANT MARINE MUSEUM NEWS The American Merchant Marine Museum in Kings Point NY exhibited "Black Mariners: A Look at African-American Seafarers Since Colonial Times" in February and March, to recognize the contributions African-Americans have made to America's maritime heritage. The exhibit began with an examination of the role of African-Americans in the whaling industry. Harsh working conditions and long voyages made whaling unpopular among most seafarers. For this reason it offered employment to the poorest members of society. African-Americans found in whaling not only work, but also a degree of respect. As that industry declined in the late 1800s, black seamen worked on fishing craft, riverboats and small coastal cargo ships. However, on deep-sea merchantmen, there were few jobs for blacks other than in the steward's department. Capt. Hugh Mulzac was born in the British West Indies and sailed on British vessels during World War I, earning a master's license. He became an American citizen in 1918, but when he tried to work on US-flag vessels, he found that the only employment was as a shipboard cook. He spent the next 20 years in the steward ' s department. World War II created an urgent need for merchant seafarers, providing Mulzac and other African-American sailors with new opportunities. Mulzac became the first African-American to command a major US merchant vessels when he was given the Liberty ship Booker T. Washington. Captain Hugh L. Mulzac Today, many African-Americans sail aboard US merchant ships as seamen and officers and serve America's maritime industry ashore. The exhibit was well received and visitors expressed a new appreciation for the rich chronicle of African-Americans at sea. -MARTIN P. SKROCKI AMMM , US Merchant Marine Academy, Kings Point NY 11024; 516 773-5515. 23606; 757 596-2222) ... Christine Randall has been named head curator of the Door County Maritime Museum . (DCMM, PO Box 246, Sturgeon Bay WI 54235; 414 743-5958) ... The United Seamen 's Service presented the Admiral of the Ocean Sea Awards (AOTOS) to Vice Admiral AlbertJ. Herberger, administrator of the Maritime Administration (MarAd), and C. Bradley Mulholland, president and CEO of Matson Navigation Company, Inc. (USS, One World Trade Center, Suite216l , NewYorkNY10048 ; 212 775-1262) ... Robert A. Guthans, presidentofMidstream Fuel Service, Inc., Petroleum Products, Co. and Tenn-Tom Towing Co., received the National Rivers Hall of Fame Achievement Award in October. (NRHF, PO Box 266, Dubuque IA 52004-0266; 319 583-124 l) INVENI PORTAM Harry C. Allendorfer, Jr. Captain Harry Allendorfer ( 1919-1997), former maritime preservation director for the National Trust for Historic Preservation, died on 15 February. Graduating from the US Naval Academy in 1941, he went to sea immediately in convoy escort duty on the vital North Atlantic run. He

went on to serve in the Korea and Vietnam conflicts before retiring in 1972. In 1977 he joined the National Trust to administer their newly formed maritime division. Admiral Thomas Patterson, who led the long campaign to save the Liberty ship Jeremiah O' Brien, and subsequently steam her to Europe for the D-Day observances in 1994, says in a letter printed in this issue of Sea History: "We couldn't have done it without this great commander who had been in harm 's way himself." PS Joseph P. DeMuccio Joe DeMuccio (1945-1997) , a retired New York detective who founded the Tugboat Enthusiasts Society, died suddenly in January. A graduate of the New York Institute of Technology , he served in the US Navy and Coast Guard. Although he never worked aboard tugs himself, his love for the vessels and his dedication to the industry Jed him to create TES, which now has 1,000 members and publishes the quarterly journal Tug Bitts. Joe is survived by his wife Lorraine and five children, Suzanne, Donna, Michael , Denise and Annali sa. Lorraiine wil l continue Joe ' s work with the Ttugboat Enthusiasts Society . .t