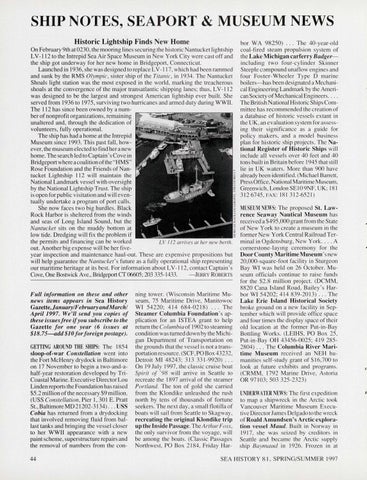 SHIP NOTES, SEAPORT &amp; MUSEUM NEWS Historic Lightship Finds New Home On February 9th at 0230, the mooring lines securing the hi storic Nantucket li ghts hi p LV-11 2 to the Intrepid Sea A ir Space Museum in New York C ity were cast off and the ship got underway fo r her new home in Bridgeport, Con necti cut. Launched in 1936, she was des igned to repl ace LV- 11 7, whi ch had been rammed and sunk by the RMS Olympic, sister ship of the Titanic , in 1934. The Nantucket Shoals light station was the most exposed in the worl d, mark ing the treacherous shoals at the convergence of the major transatlantic shipp ing lanes; thus, L V- 1 12 was designed to be the largest and strongest American lightship ever built. She served from 193 6 to 1975 , surviving two hurricanes and armed duty during WWII . The 11 2 has since been owned by a number of nonprofit organizations, remaining unaltered and, through the dedi cati on of volunteers, full y operational. The ship has had a home at the Intrepid Museum since 1993. This pas t fa ll , however, the museum elected to find her a new home. The search led to Captain &#39;s Cove in Bridgeport where a coaliti on of the &quot; HMS &quot; Rose Foundation and the Friends of Nantucket Lightship 11 2 will maintain the National Landm ark vessel with oversight by the Nati onal Li ghtship Trust. The ship is open fo r public visitati on and will eventuall y undertake a program of port call s. She now faces two bi g hurdl es. Bl ack Rock Harbor is she ltered from the winds and seas of Long Island Sound, but the Nantucket sits on the muddy bottom at low tide. Dredging will fi x the problem if the permits and fi nancing can be worked LV 112 arrives at her new berth. out. Another big expense will be her fi veyear inspection and maintenance haul-out. These are expensive propos iti ons but will help guarantee the Nantucket&#39;s future as a full y operational ship representing our maritime heritage at its best. For information about L V- 1 12, contact Captain &#39;s Cove, One Bostwick Ave., Bridgeport CT 06605; 203 335- l 433. - JERRY ROBERTS

Full information on these and other news items appears in Sea History Gazette,January!FebruaryandMarch/ April 1997. We&#39;ll send you copies of these issues free if you subscribe to the Gazette for one year (6 issues at $18.75-add $10 for foreign postage).

GETTING AROUND THE SHIPS: T he 1854 sloop-of-war Constellation went into the Fort McHenry drydock in Ba ltimore on 17 November to begin a two-and-ahalf-year restorati on developed by TriCoas tal Marine. Executive Director Lou Linden reports the Foundation has raised $5.2 million of the necessary $9 million . (USS Constellation, Pier 1, 301 E. Pratt St., Baltimore MD 2 1202-3 134) .. . USS Cobia has returned from a drydocking that involved remov ing fluid from ballast tanks and bringing the vessel closer to her WWII appearance with a new paint scheme, superstructure repairs and the removal of numbers from the con44

ning tower. (Wisconsin Maritime M useum , 15 Maritime Dri ve, Manitowoc WI 54220; 4 14 684-02 18) . . . T he Steamer Columbia Foundation &#39; s application fo r an !STEA grant to help return the Columbia of 1902 to steaming condition was turned down by the Michigan Department of Transportation on the grounds that the vessel is not a transportation reso urce. (SCF, PO Box 43232, Detro it MI 48243; 313 33 1-9920) ... On 19 Jul y 1997, the cl ass ic cru ise boat Spirit of &#39;98 will arri ve in Seattle to recreate the 1897 arrival of the steamer Portland. T he ton of go ld she carried from the Klond ike unleashed the rush north by tens of thousands of fo rtune seekers. The nex t day, a small fl otilla of boats will sai l from Seattle to Skagway, recreating the original Klondike trip up the Inside Passage. T heArthur Foss, the onl y survivor from the voyage, will be among the boats. (C lass ic Passages North west, PO Box 2 184, Friday Har-

UNDERWATER NEWS: The first ex pediti on to map a shipwreck in the Arcti c took Vancouver Maritime Museum Executi ve Di rector Jam es Delgado to the wreck ofRoald Amundsen &#39; s Arctic exploration vessel Maud. Built in Norway in 19 17, she w as seized by creditors in Sea ttl e and became the Arcti c supply ship Baym a ud in J926. Frozen in at