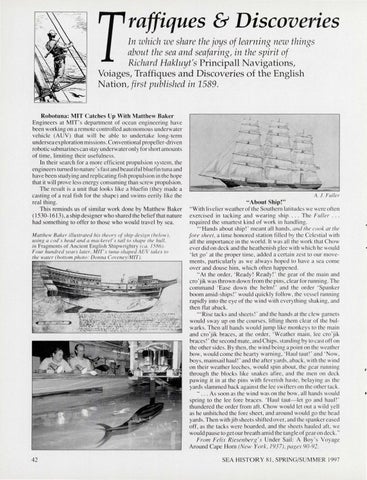 raffiques & Discoveries In which we share the joys of learning new things a.bout the sea and seafaring, in the spirit of Richard Hakluyt's Principall Navigations, Voiages, Traffiques and Discoveries of the English Nation, first published in 1589.

Robotuna: MIT Catches Up With Matthew Baker Engineers at MIT' s department of ocean engineerin g have been workin g on a remote contro ll ed autonomous underwa ter vehi cle (AUV ) that w ill be able to undertake long-term undersea ex ploration mi ss ions. Conventional propell er-dri ven roboti c submarines can stay underwateronl y for short amounts of time, limiting their usefuln ess. In their search for a more efficient propul sion sys tem, the engineers turned to nature's fas t and bea utiful bluefin tuna and have been stud y ing and replica ting fish propul sion in the hope that it w ill prove less energy consuming than screw propul sion. The res ult is a unit that looks like a bluefin (they made a casting of a real fi sh fo r the shape) and sw ims eeril y li ke the real thing. Thi s reminds us of similar work done by M atthew B aker ( 1530-1613), a ship des igner who shared the belief that nature had something to offer to those who would travel by sea. Matthew Baker illustra ted his theory of ship desig n (below), using a cod's head and a mackerel's tail to shape the hull. i11 Fragments of A ncient English Shipwrightry (ca. 1586). Fo t1r ht1 ndred yea rs later, M IT' s tuna-shaped AUV takes to the wa ter (bo110111 photo: Donna Coiâ&#x20AC;˘eney!MIT).

" About Ship! " " With li ve li er weather of the Southern latitudes we were often exercised in tackin g and w earin g ship .... The Fu ller .. . required the smartest kind of work in handling. '" Hands about ship! ' meant al l hand s, and the cook at the fo re sheet, a time honored station fill ed by the Celesti al with all the importance in the world. It was all the work that Chow ever did on deck and the hea theni sh glee with which he would ' let go' at the proper time, added a certain zes t to our movements, parti cul arl y as we al ways hoped to have a sea come over and douse him, which o ften happened . " At the order, ' Ready ! Ready!' the gear of the main and cro 'jik was thrown down from the pin s, clear fo r runnin g. T he command ' Ease down th e helm !' and the order 'S panker boom amid-ships! ' would qui ckl y fo ll ow, the vessel runnin g rapidl y into the eye of the wind w ith everything shakin g, and then flat aback. '" Ri se tacks and sheets! ' and the hands at the clew garn ets wo uld sway up on the co urses . lifting them clear of the bul wark s. Then all hands wo uld jump li ke monkeys to the main and cro 'jik braces, at the order, ' W eather main, lee cro'j ik braces!' the second mate, and Chips, standing by to cas t off on the other sides . B y then, the w ind be ing a point on the weather bow, would come the hearty warnin g, ' Haul taut ! ' and' ow, boys, mainsail haul !' and the after yard s, aback, w ith the w ind on their weather leeches, would spin about, the gear running throu gh the bl ocks like snakes afire, and the men on deck paw ing it in at the pins with feve ri sh haste, belay ing as the yard s slammed back aga in st the lee sw ifters on the other tack. " . . . A s soon as the w ind was on the bow , all hand s woul d spring to the lee fo re braces. ' Haul taut- let go and haul" thundered the order from aft. Chow woul d let out a w il d ye ll as he unhitched the fo re sheet, and around would go the head yard s. Then w ith jib sheets shifted over, and the spanker eased off, as the tacks were board ed, and the sheets hauled aft, we wo uld pause to get our breath amid the tangle of gearon deck. " From Felix Riesenberg's Under Sail : A Boy 's Voyage A round Cape Horn (New York , 1937),pages 90-92. SEA HISTORY 8 1, SPRING/SU MM ER 1997