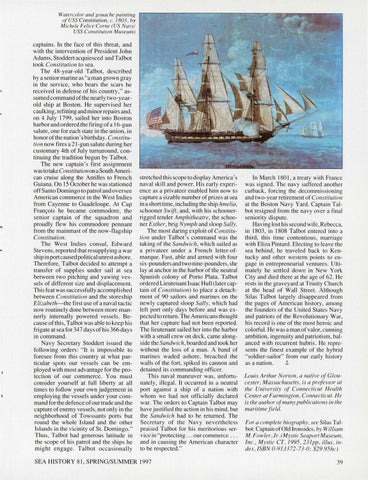 captains. In the face of this threat, and with the intervention of Preside nt John Adams, Stoddert acquiesced and Ta ibot took Constitution to sea. The 48-year-old Talbot, described by a seniormarineas &quot;a man grown gray in the service, who bears the scars he received in defense of hi s country,&quot; assumed command of the nearI y two-yearold ship at Boston . He supervised he r caul king, refi tting and minor repai rs and , on 4 Jul y 1799, sailed her into Boston harbor and ordered the firing of a 16-gun salute, one fo r each state in the unio n, in honorof the nation &#39; s birthday . Constitution now fi res a 2 1-gun salute during her customary 4th of Jul y turnaro und , continuing the tradition begun by Talbot. The new captain &#39;s first assignme nt was to take Constitution on a South Am erican cruise along the Antilles to Fre nch Guiana. On 15 October he was statio ned off Santo Domingo to patrol and oversee American commerce in the West Indies fro m Cayenne to Guadeloupe. At Cap Frarn;:ois he became commodore, the seni or captain of the squadron and pro udl y fl ew hi s commodore pennant fro m the mainmast of the now-fl ags hip Constitution. The West Indies consul , Ed ward Stevens, reported that resuppl ying a war shi p in port caused political unrest ashore. Therefore, Talbot decided to attempt a transfer of supplies under sail at sea between two pitching and yaw ing vessels of diffe rent size and di spl aceme nt. This fea t was successfull y accompli shed between Constitution and the storeship Elizabeth- the first use of a naval tacti c now ro utine ly done between more m anne rl y internally powered vesse ls. Because of thi s, Talbot was abl e to keep hi s frigate at sea for 347 days of hi s 366 d ays in command . Navy Secretary Stoddert issued the fo llow ing orders: &quot; It is impossible to fo resee from thi s country at what particul ar spots our vessels can be e mployed with most advantage fo r the protection of o ur commerce. You mu st consider yourself at full liberty at a ll ti mes to follow your own judgeme nt in empl oy ing the vessels under yo ur command fo r the defence of our trade and the capture of enemy vessels, not onl y in the ne ighborhood of Towssants ports but ro und the whole Island and the o ther Islands in the vicinity of St. Domingo .&quot; T hus, Talbot had generous latitude in the scope of hi s patrol and the shi ps he mi g ht e ngage . Ta lbo t occas io na ll y

stretched thi s scope to di spl ay America&#39;s naval skill and power. Hi s earl y experi ence as a privateer enabled him now to capture a sizable number of pri zes at sea in a short time, incl ud ing the ship Amelia, schooner Swift, and , with hi s schoonerrigged tender Amphitheatre, the schooner Esther, brig Nymph and sloop Sa lly. The most daring ex plo it of Constitution under Talbot &#39;s command was the taking of the Sandwich, which sailed as a pri vateer under a French letter-ofmarque. Fast, able and armed with fo ur six-pounders and two nine-pounders, she lay at anchor in the harbor of the neutral Spani sh colony of Porto Plata. Talbot ordered Lieutenant Isaac Hull (later captain of Constitution) to pl ace a detachment of 90 sail ors and mari nes on the new ly captured sloop Sa lly, which had left port onl y days before and was expected to return. The Americans thought that her capture had not been reported. The lieutenant sailed her into the harbor with a small crew on deck, came alongside the Sandwich, boarded and took her without the loss of a man. A band of marines waded as hore, breached the wa ll s of the fo rt, spiked its cannon and detained its commanding officer. Thi s naval maneuver was, unfo rtunately, illegal. It occurred in a neutral port against a shi p of a nation with whom we had not offic iall y declared war. The orde rs to Captain Ta lbot may have j ustified the action in hi s mind, but the Sandwich had to be returned. The Sec retary of the Navy neverthe less praised Talbot for hi s meritorious service in &quot; protecting ... our commerce .. . and in causing the American character to be respected.&quot;

In March 180 I , a treaty with France was signed. The navy suffe red another cutback, forc ing the decommi ss ioning and two-year retirement of Constitution at the Bosto n Navy Yard . Captai n Talbot resigned fro m the navy over a fi nal seniori ty di spute. Having lost his second wife, Rebecca, in 1803, in l 808 Talbot entered into a third , th is time contenti ous, marri age with Eli za Pintard. Electing to leave the sea behind, he traveled back to Kentucky and other western points to engage in entrepreneurial ventu res. Ul timately he settled down in New York City and died there at the age of 62. He rests in the graveyard at T rinity Church at the head of Wall Street. Altho ugh Silas Talbot largely disappeared from the pages of American hi story, among the fo unders of the United States Navy and patriots of the Revolutionary War, hi s record is one of the most heroic and colorful. He was a man of valor, cunning ambition, ingenuity and patrioti sm, balanced with recurrent hubri s. He represents the fi nest example of the hybrid &quot;soldier-sail or&quot; fro m our earl y hi story !, as a nati on.

Louis Arthur Norton, a native of Gloucester, Massachusetts , is a professor at the University of Connecticut Health Center at Farmington, Connecticut. He is the author of many publications in the maritime fi eld. For a complete biography, see Silas Talbot: Captain of Old Ironsides, by William M. Fowler.Ir. (Mystic Seaport Mu seum, Inc., Mystic CT, 1995 , 23 lpp , illus, index , ISBN 0-9133 72 -73-0 ; $29 .95hc) 39