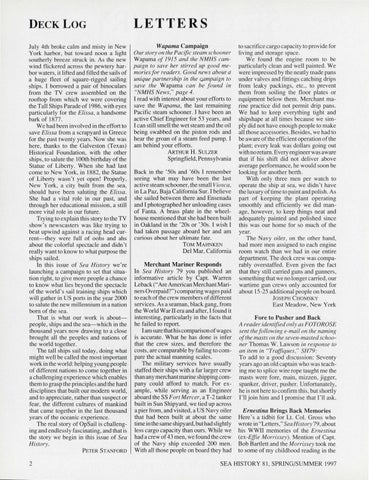 July 4th broke calm and misty in New York harbor, but toward noon a light southerly breeze struck in. As the new wind flickered across the pewtery harbor waters, it lifted and filled the sail s of a huge fleet of square-rigged sai ling ships. I borrowed a pair of binoculars from the TV crew assembled on the rooftop from which we were covering the Tall Ships Parade of 1986, with eyes particularly for the Elissa, a handsome bark of 1877. We had been involved in the effort to save Elissa from a scrapyard in Greece for the past twenty years. Now she was here, thanks to the Galveston (Texas) Hi storical Foundation, with the other ships, to salute the lOOth birthday of the Statue of Liberty. When she had last come to New York, in 1882, the Statue of Liberty wasn't yet open! Properly, New York, a city built from the sea, should have been saluting the Elissa. She had a vital role in our past, and through her educational mission , a still more vital role in our future. Trying to explain thi s story to the TV show 's newscasters was like trying to beat upwind against a racing head current-they were full of oohs and ahs about the colorful spectacle and didn 't really want to know to what purpose the ships sailed. In this issue of Sea History we're launching a campaign to set that situation right, to give more people a chance to know what lies beyond the spectacle of the world 's sail training ships which will gather in US ports in the year 2000 to salute the new millennium in a nation born of the sea. That is what our work is aboutpeople, ships and the sea-which in the thousand years now drawing to a close brought all the peoples and nations of the world together. The tall ships sail today, doing what might well be called the most important work in the world: helping young people of different nations to come together in a challenging experience which enables them to grasp the principles and the hard disciplines that built our modem world , and to appreciate, rather than suspect or fear, the different cultures of mankind that came together in the last thousand years of the oceanic experience. The real story of OpSail is challenging and endlessly fascinating, and that is the story we begin in this issue of Sea History.

Wapama Campaign Our story on the Pacific steam schooner Wapama of 1915 and the NMHS campaign to save her stirred up good memories for readers. Good news about a unique partnership in the campaign to save the Wapama can be found in "NMHS News," page 4. I read with interest about your efforts to save the Wapama, the last remaining Pacific steam schooner. I have been an active Chief Engineer for 53 years, and I can still smell the wet steam and the oil being swabbed on the piston rods and hear the groan of a steam feed pump. I am behind your efforts. ARTHUR H. SULZER Springfield, Pennsylvania

Back in the '50s and '60s I remember seeing what may have been the last active steam schooner, the small Viosca , in La Paz, Baja California Sur. I believe she sailed between there and Ensenada and I photographed her unloading cases of Fanta. A brass plate in the wheelhouse mentioned that she had been built in Oakland in the '20s or '30s. I wish I had taken passage aboard her and am curious about her ultimate fate. TOM MAHNKEN

Merchant Mariner Responds In Sea History 79 you published an informative article by Capt. Warren Leback ("Are American Merchant Mariners Overpaid?") comparing wages paid to each of the crew members of different services. As a seaman, black gang, from the World War II era and after, I found it interesting, particularly in the facts that he failed to report. I am sure that his comparison of wages is accurate. What he has done is infer that the crew sizes, and therefore the costs, are comparable by failing to compare the actual manning scales. The military services have usually staffed their ships with a far larger crew than any merchant marine shipping company could afford to match. For example, while serving as an Engineer aboard the SS Fort Mercer, a T-2 tanker built in Sun Shipyard, we tied up across a pier from, and visited, a US Navy oiler that had been built at about the same timein the same shipyard, but had slightly less cargo capacity than ours. While we had a crew of 43 men, we found the crew of the Navy ship exceeded 200 men. With all those people on board they had

to sacrifice cargo capacity to provide for living and storage space. We found the engine room to be particularly clean and well painted. We were impressed by the neatly made pans under valves and fittings catching drips from leaky packings, etc., to prevent them from soi ling the floor plates or equipment below them. Merchant marine practice did not permit drip pans. We had to keep everything tight and shipshape at all times because we simply did not have enough people to make all those accessories. Besides, we had to be aware of the efficient operation of the plant; every leak was dollars going out with no return . Every engineer was aware that if hi s shift did not deliver above average performance, he would soon be looking for another berth. With only three men per watch to operate the ship at sea, we didn ' t have the luxury oftime to paint and polish. As part of keeping the plant operating smooth ly and efficiently we did manage, however, to keep things neat and adequately painted and polished since this was our home for so much of the year. The Navy oiler, on the other hand, had more men assigned to each engine room watch than we had in our entire department. The deck crew was comparably overstaffed. Even given the fact that they still carried guns and gunners, something that we no longer carried, our wartime gun crews only accounted for about 15-25 additional people on board. JOSEPH CHOMSKY

Fore to Pusher and Back A reader identified only as FOTOROSE sent the following e-mail on the naming of the masts on the seven-masted schooner Thomas W. Lawson in response to an item in "Traffiques," SH79: To add to a good discussion: Seventy years ago an old captain who was teaching me to splice wire rope taught me the masts were fore, main, mizzen, jigger, spanker, driver, pusher. Unfortunately, he is not here to confirm this, but shortly I'll join him and I promise that I'll ask.

Ernestina Brings Back Memories Here 's a tidbit for Lt. Col. Gross who wrote in "Letters," SeaHistory79 , about his WWII memories of the Ernestina (ex-Effie Morrissey). Mention of Capt. Bob Bartlett and the Morrissey took me to some of my childhood reading in the