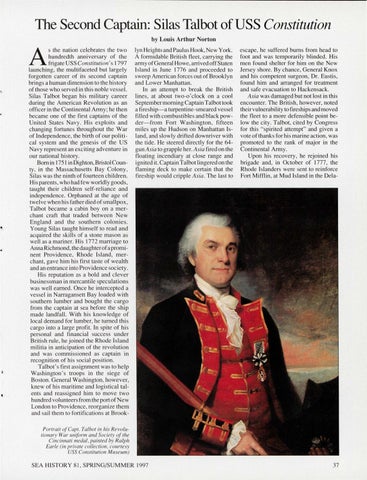 The Second Captain: Silas Talbot of USS Constitution by Louis Arthur Norton s the nation celebrates the two hundredth anniversary of the frigate USS Constitution's 1797 launching, the multifaceted but largely forgotten career of its second captain brings a human dimension to the history of those who served in this noble vessel. Silas Talbot began his military career during the American Revolution as an officer in the Continental Army; he then became one of the first captains of the United States Navy. His exploits and changing fortunes throughout the War of Independence, the birth of our political system and the genesis of the US Navy represent an exciting adventure in our national history. Born in 1751 inDighton,BristolCounty , in the Massachusetts Bay Colony, Silas was the ninth of fourteen children. Hi s parents, who had few worldly goods , taught their children self-reliance and independence. Orphaned at the age of twelve when his father died of smallpox , Talbot became a cabin boy on a merchant craft that traded between New England and the southern colonies. Young Silas taught himself to read and acquired the skills of a stone mason as well as a mariner. His 1772 marriage to Anna Richmond, the daughter of a prominent Providence, Rhode Island, merchant, gave him his first taste of wealth and an entrance into Providence society . Hi s reputation as a bo ld and clever businessman in mercantile speculations was well earned. Once he intercepted a vessel in Narragansett Bay loaded with southern lumber and bought the cargo from the captain at sea before the ship made landfall. With his knowledge of local demand for lumber, he turned this cargo into a large profit. In spite of his personal and financial success under British rule, he joined the Rhode Island militia in anticipation of the revolution and was commissioned as captain in recognition of his social position. Talbot's first assignment was to help Washington's troops in the siege of Boston. General Washington, however, knew of his maritime and logi stical talents and reassigned him to move two hundred volunteers from the port of New London to Providence, reorganize them and sail them to fortification s at Brook-

lyn Heights and Paulus Hook, New York. A formidable British fleet, carrying the army of General Howe, arrived off Staten Island in June 1776 and proceeded to sweep American forces out of Brooklyn and Lower Manhattan. In an attempt to break the British lines, at about two-o ' clock on a cool September morning Captain Talbot took a fireship-a turpentine-smeared vessel filled with combustibles and black powder-from Fort Washington , fifteen miles up the Hudson on Manhattan Island, and slowly drifted downriver with the tide. He steered directly for the 64gun Asia to grapple her. Asia fired on the floating incendiary at close range and ignited it. Captain Talbot lingered on the flaming deck to make certain that the fireship would cripple Asia. The last to

escape, he suffered burns from head to foot and was temporarily blinded. His men found shelter for him on the New Jersey shore. By chance, General Knox and hi s competent surgeon, Dr. Eustis , found him and arranged for treatment and safe evacuation to Hackensack. Asia was damaged but not lost in this encounter. The British, however, noted their vu lnerability to fireships and moved the fleet to a more defensible point below the city. Talbot, cited by Congress for thi s "spirited attempt" and given a vote of thanks for hi s marine action, was promoted to the rank of major in the Continental Army . Upon hi s recovery , he rejoined his brigade and , in October of 1777, the Rhode Islanders were sent to reinforce Fort Mifflin, at Mud Island in the Dela-

Portrait of Cap1 . Talbot in his Re volu tionary War uniform and Society of the Cincinnati medal, painted by Ralph Earle (in private collection, courtesy USS Constitution Mu seum)