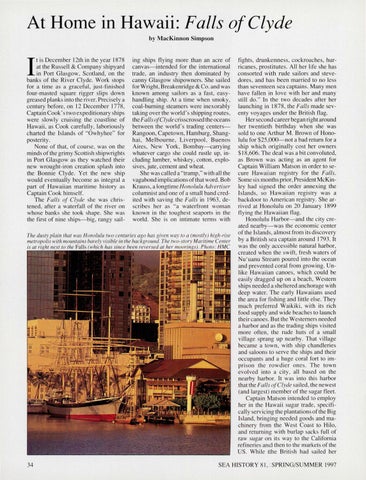 At Home in Hawaii: Falls of Clyde by MacKinnon Simpson

t is December 12th in the year 1878 at the Russell &amp; Company shipyard in Port Glasgow, Scotland, on the banks of the River Clyde. Work stops for a time as a graceful , just-fini shed four-masted square rigger slips down greased planks into the river. Preci sely a century before, on 12 December 1778, Captain Cook &#39;s two expeditionary ships were slowl y cruising the coastline of Hawaii , as Cook carefully, laboriously charted the Islands of &quot;Owhyhee&quot; for posterity. None of that, of course, was on the minds of the grimy Scottish shipwrights in Port Glasgow as they watched their new wrought-iron creation splash into the Bonnie C lyde. Yet the new ship would eventually become as integral a part of Hawaiian maritime hi story as Captain Cook himself. The Falls of Clyde she was chri stened , after a waterfall of the river on whose banks she took shape. She was the first of nine ships-bi g, rangy sa il-

ing ships flying more than an acre of canvas-intended for the international trade, an industry then dominated by canny Glasgow shipowners. She sai led for Wright, Breakenridge &amp; Co. and was known among sailors as a fast, easyhandling ship. At a time when smoky , coal-burn ing steamers were inexorably taking over the world &#39;s shipping routes, the Falls ofClydecrisscrossed the oceans between the world&#39;s trading centersRangoon , Capetown, Hamburg, Shanghai , Melbourne , Liverpoo l, Buenos Aires , New York, Bombay-carrying whatever cargo she cou ld rustle up, including lumber, whiskey, cotton, explosives, jute, cement and wheat. She was called a &quot; tramp ,&quot; with all the vagabond imp I ications of that word . Bob Krauss, a longtime Honolulu Advertiser columni st and one of a small band credited with sav ing the Falls in 1963 , describes her as &quot;a waterfront woman known in the toughest seaports in the world. She is on intimate terms with

Th e dusty plain that was Honolulu two centuries ago has given way to a (most ly) high-rise metropolis with mountains barely visible in the background. Th e two-story Maritime Center is at right next to the Falls (which has since been reversed at her moorings). Pho10: HMC

fights, drunkenness, cockroaches, hurricanes , prostitutes. All her life she has consorted with rude sailors and stevedores , and has been married to no less than seventeen sea captains. Many men have fa ll en in love with her and many still do. &quot; In the two decades after her launching in 1878, the Falls made seventy voyages under the British flag . Her second career began right around her twentieth birthday when she was sold to one Arthur M. Brown of Honolulu for $25,000-not a bad return for a ship which originall y cost her owners $18,606. The deal was a bit convo luted , as Brown was acting as an agent for Captain William Matson in order to secure Hawaiian registry for the Falls. Some six month s prior, President McKinley had signed the order annexing the Isl ands, so Hawaiian registry was a backdoor to American registry. Shearrived at Honolulu on 20 January 1899 flying the Hawaiian flag . Honolulu Harbor- and the c ity created nearby- was the economic center of the Islands , a lmost from its discovery by a British sea captain aro und 1793. It was the on ly accessible natural harbor, created when the sw ift, fresh waters of Nu &#39; uanu Stream poured into the ocean and prevented coral from growing. Un 1ike Hawaiian canoes , which could be easily dragged up on a beach , Western ships needed a sheltered anchorage with deep water. The early Hawaiians used the area for fish ing and little else. They much preferred Waikiki , with its rich food suppl y and wide beaches to launch the ir canoes. But the Westerners needed a harbor and as the trading sh ips visited more often , the rude huts of a small village sprang up nearby. That village became a town , with ship chandleries and saloons to serve the ships and their occupants and a huge coral fort to impri son th e rowdier ones. The town evolved into a city , all based on the nearby harbor. It was into this harbor that the Falls of Clyde sailed, the newest (and largest) member of the sugar fleet. Captain Matson intended to employ her in the Hawaii sugar trade , specifical Iy servicing the plantations of the Big Island, bringing needed goods and machinery from the West Coast to Hilo, and returning with burlap sacks full of raw sugar om its way to the California refin eri es ancd then to the markets of the US. Whil e tthe British had sai led her