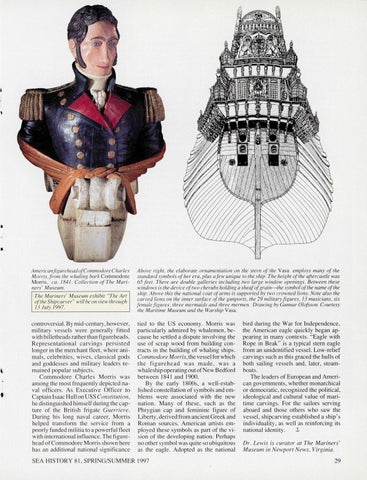 controversial.By mid-century, however, military vessels were generally fitted with billetheads ratherthan figureheads. Representational carvings persisted longer in the merchant fleet, where animal s, celebrities, wives , classical gods and goddesses and military leaders remained popular subjects. Commodore Charles Morris was among the most frequently depicted naval officers. As Executive Officer to Captain Isaac Hull on USS Constitution, he distinguished himself during the capture of the British frigate Guerriere. During hi s long naval career, Morris helped transform the service from a poorly funded militia to a powerful fleet with international influence. The figurehead of Commodore Morris shown he re has an add itional national sign ificance

Above right, the elaborate ornamentation on the stern of the Vasa employs many of the standard symbols of her era, plus a few unique to the ship. The height of the aftercastle was 65 feet. There are double galleries including two large window openings. Between these windows is the device of two cherubs holding a sheaf of grain-the symbol of the name of the ship. Above this the national coar of arms is supported by two crowned lions. Note also the carved lions on the inner swface of the gunports, the 29 military figures, J3 musicians, six femal e figures, three mermaids and three mermen. Drawing by Gunnar Olofsson. Courtesy the Maritime Museum and the Warship Vasa.

tied to the US economy. Morris was particularly admired by whalemen, because he settled a dispute involving the use of scrap wood from building contracts in the building of whaling ships. Commodore Morris, the vessel for which the figurehead was made , was a whaleship operating out of New Bedford between 1841 and 1900. By the early 1800s, a well-establi shed constellation of symbols and emblem s were associated with the new nation. Many of these, such as the Phrygian cap and feminine figure of Liberty , derived from ancient Greek and Roman sources. American artists employed these symbols as part of the vision of the developing nation. Perhaps no other symbol was quite so ubiquitous as the eagle. Adopted as the national

bird during the War for Independence, the American eagle quickly began appearing in many contexts. "Eagle with Rope in Beak" is a typical stern eagle from an unidentified vessel. Low-relief carvings such as this graced the hulls of both sailing vessels and, later, steamboats. The leaders of European and American governments, whether monarchical or democratic, recognized the political , ideological and cu ltural value of maritime carvings. For the sailors serving aboard and those others who saw the vesse l, shipcarving established a ship's individuality, as well as reinforcing its ,!, national identity. Dr. Lewis is curator at The Mariners'