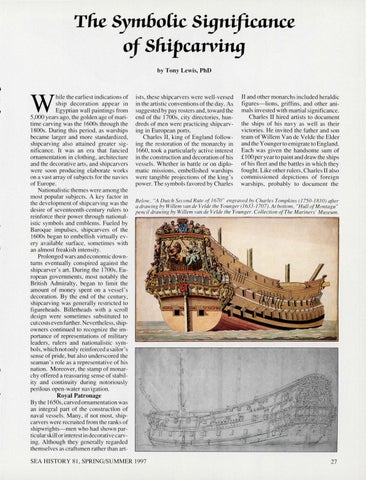 hile the earliest indications of ship decoration appear in Egyptian wall paintings from 5,000 years ago, the go lden age of maritime carving was the 1600s through the 1800s. During thi s period , as warships became larger and more standard ized, shipcarving also attained greater significance. It was an era that fancied ornamentation in clothing, architecture and the decorative arts, and shipcarvers were soon producing elaborate works on a vast array of subjects for the navies of Europe. Nationalistic themes were among the most popular subjects. A key factor in the development of shipcarv ing was the desire of seventeenth-century rulers to reinforce their power through national istic symbol s and emblems. Fueled by Baroque impulses, shipcarvers of the 1600s began to embellish virtually every avai lable surface, sometimes with an almost freakish inten si ty . Prolonged wars and economic downturns eventually conspired against the shipcarver's art. During the 1700s, European governments, most notably the British Admiralty, began to limit the amount of money spent on a vessel's decoration. By the end of the century , shipcarving was generally restri cted to figureheads. Billetheads with a scro ll design were sometimes substituted to cut costs even further. Nevertheless, shipowners continued to recognize the importance of representations of military leaders, rulers and nationali stic symbols, which not only reinforced a sa ilor's sense of pride, but also underscored the seaman 's role as a representative of his nation . Moreover, the stamp of monarchy offered a reassuring sense of stability and continuity during notoriously perilous open-water navi gation. Royal Patronage By the 1650s, carved ornamentation was an integral part of the constructfon of naval vessels. Many, if not most, shipcarvers were recruited from the ranks of shipwrights-men who had shown particu lar skill or interest in decorati ve carving. Although they generally regarded themse lves as craftsmen rather than art-

ists, these shipcarvers were well-versed in the artistic conventions of the day. As suggested by pay rosters and , toward the end of the 1700s, city directories, hundreds of men were practicing shipcarving in European ports. Charles II , king of England following the restoration of the monarchy in 1660, took a particularl y active interest in the construction and decoration of his vessels. Whether in battle or on diplomatic mi ss ions, embe llished warships were tangible projections of the king's power. The symbol s favored by Charles

II and other monarchs included heraldic figures-lion s, griffins, and other animals invested with martial significance. Charles II hired artists to document the ships of hi s navy as well as their victories. He invited the father and son team of Willem Van de Velde the Elder and the Younger to emigrate to Eng land. Each was g iven the handsome sum of ÂŁ100 per year to paint and draw the ships of his fl eet and the battles in which they fought. Like other rulers, Charles II also commissioned depictions of foreign warships, probabl y to document the