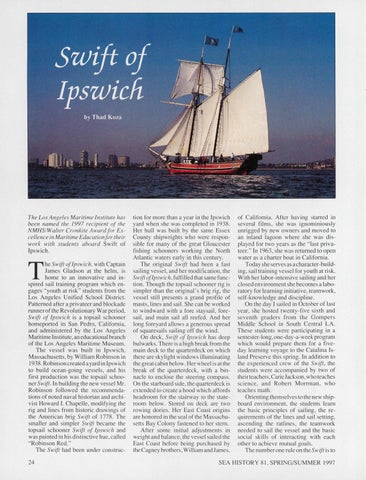 The Los Angeles Maritime Institute has been named the 1997 recipient of the NM HS/Walter Cronkite Award for Excellence in Maritime Education for their work with students aboard Swift of Ipswich.

he Swifi of Ipswich , with Captain James Gladson at the helm, is home to an innovative and inspired sail training program which engages "youth at risk" students from the Los Angeles Unified School District. Patterned after a privateer and blockade runner of the Revolutionary War period, Swifi of Ipswich is a topsail schooner homeported in San Pedro, California, and administered by the Los Angeles Maritime Institute, an educational branch of the Los Angeles Maritime Museum. The vessel was built in Ipswich , Massachusetts, by William Robinson in 1938. Robinson created a yard in Ipswich to build ocean-going vessels, and his first production was the topsail schooner Swift. In building the new vessel Mr. Robinson followed the recommendations of noted naval historian and archivist Howard I. Chapelle, modifying the rig and lines from historic drawings of the American brig Swift of 1778. The smaller and simpler Swift became the topsail schooner Swift of Ipswich and was painted in his distinctive hue, called "Robinson Red." The Swift had been under construe24

tion for more than a year in the Ipswich yard when she was completed in 1938. Her hull was built by the same Essex County shipwrights who were responsible for many of the great Gloucester fishing schooners working the North Atlantic waters early in this century. The original Swift had been a fast sailing vessel , and her modification , the Swiftoflpswich, fulfilled that same function . Though the topsail schooner rig is simpler than the original ' s brig rig , the vessel still presents a grand profile of masts, lines and sail. She can be worked to windward with a fore staysail , foresail, and main sail all reefed. And her long foreyard allows a generous spread of squaresails sailing off the wind. On deck, Swift of Ipswich has deep bulwarks. There is a high break from the main deck to the quarterdeck on which there are skylight windows illuminating the great cabin below. Her wheel is at the break of the quarterdeck, with a binnacle to enclose the steering compass. On the starboard side, the quarterdeck is extended to create a hood which affords headroom for the stairway to the stateroom below. Stored on deck are two rowing dories. Her East Coast origins are honored in the seal of the Massachusetts Bay Colony fastened to her stern. After some initial adjustments in weight and balance, the vessel sailed the East Coast before being purchased by the Cagney brothers, W iII iam and Jam es,

of California. After having starred in several films, she was ignominiously unrigged by new owners and moved to an inland lagoon where she was displayed for two years as the "last privateer." In 1963 , she was returned to open water as a charter boat in California. Today she serves as a character-building , sail training vessel for youth at risk. With her labor-intensive sailing and her closed environment she becomes a laboratory for learning initiative, teamwork, self-knowledge and discipline. On the day I sailed in October of last year, she hosted twenty-five sixth and seventh graders from the Gompers Middle School in South Central LA. These students were participating in a semester-long, one-day-a-week program which would prepare them for a fiveday learning voyage to the Catalina island Preserve this spring. In addition to the experienced crew of the Swift, the students were accompanied by two of their teachers, Carie Jackson, who teaches science, and Robert Morrman , who teaches math. Orienting themselves to the new shipboard environment, the students learn the basic principles of sailing, the requirements of the lines and sail setting, ascending the ratlines , the teamwork needed to sail the vessel and the basic social skills of interacting with each other to achieve mutual goals. The number one rule on the Swift is to