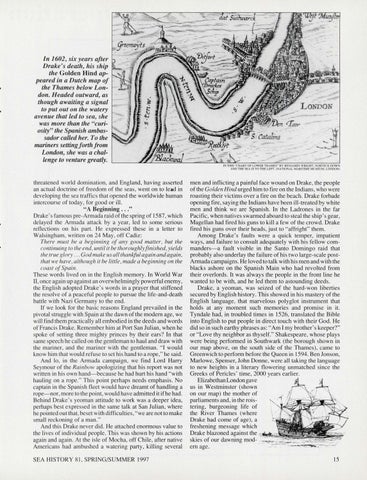 In 1602, six years after Drake's death, his ship the Golden Hind appeared in a Dutch map of the Thames below London. Headed outward, as though awaiting a signal to put out on the watery avenue that led to sea, she was more than the "curiosity" the Spanish ambassador called her. To the mariners setting forth from London, she was a challenge to venture greatly.

threatened world domination, and England, having asserted an actual doctrine of freedom of the seas, went on to lead in developing the sea traffics that opened the worldwide human intercourse of today , for good or ill. " A Beginning ... " Drake ' s famou s pre-Armada raid of the spring of 1587, which delayed the Armada attack by a year, led to some serious reflections on his part. He expressed these in a letter to Walsingham, written on 24 May, off Cadiz: There must be a beginning of any good matter, but the continuing to the end, until it be thoroughly finished, yields the true glory . .. God make us all thankful again and again, that we have, although it be little , made a beginning on the coast of Spain . These words lived on in the English memory. In World War II, once again up against an overwhelmingly powerful enemy, the English adopted Drake 's words in a prayer that stiffened the resolve of a peaceful people to pursue the life-and-death battle with Nazi Germany to the end. If we look for the basic reasons England prevailed in the pivotal struggle with Spain at the dawn of the modem age, we will find them practically all embodied in the deeds and words of Francis Drake. Remember him at Port San Julian , when he spoke of setting three mighty princes by their ears? In that same speech he called on the gentleman to haul and draw with the mariner, and the mariner with the gentleman. "I would know him that would refuse to set his hand to a rope," he said. And lo, in the Armada campaign, we find Lord Harry Seymour of the Rainbow apologizing that his report was not written in his own hand-because he had hurt his hand "with hauling on a rope." This point perhaps needs emphasis. No captain in the Spanish fleet would have dreamt of handling a rope-nor, more to the point, would have admitted it ifhe had . Behind Drake 's yeoman attitude to work was a deeper idea, perhaps best expressed in the same talk at San Julian, where he pointed out that, beset with difficulties , " we are not to make small reckoning of a man ." And this Drake never did. He attached enormous value to the li ves of individual people. This was shown by his actions again and again. At the isle of Mocha, off Chile, after native Americans had ambushed a watering party, killing several SEA HISTORY 81, SPRING/SUMMER 1997

men and inflicting a painful face wound on Drake, the people of the Golden Hindurged him to fire on the Indians , who were roasting their victims over a fire on the beach. Drake forbade opening fire, saying the Indians have been ill-treated by white men and think we are Spanish. In the Ladrones in the far Pacific, when natives swarmed aboard to steal the ship's gear, Magellan had fired his guns to kill a few of the crowd. Drake fired his guns over their heads, just to "affright" them. Among Drake's faults were a quick temper, impatient ways, and failure to consult adequately with his fellow commanders-a fault visible in the Santo Domingo raid that probably also underlay the failure of his two large-scale postArmada campaigns. He loved to talk with his men and with the blacks ashore on the Spanish Main who had revolted from their overlords. It was always the people in the front line he wanted to be with, and he led them to astounding deeds . Drake, a yeoman, was seized of the hard-won liberties secured by English history. This showed in his mastery of the English language, that marvelous polyglot instrument that holds at any moment such memories and promi se in it. Tyndale had, in troubled times in 1526, translated the Bible into English to put people in direct touch with their God. He did so in such earthy phrases as: "Am I my brother's keeper?" or "Love thy neighbor as thyself." Shakespeare, whose plays were being performed in Southwark (the borough shown in our map above, on the south side of the Thames), came to Greenwich to perform before the Queen in 1594. Ben Jonson, Marlowe, Spenser, John Donne, were all taking the language to new heights in a literary flowering unmatched since the Greeks of Pericles ' time, 2000 years earlier. Elizabethan London gave us in Westminster (shown on our map) the mother of parliaments and, in the roistering, burgeoning life of the River Thames (where Drake had come of age), a freshening message which Drake blazoned against the = -