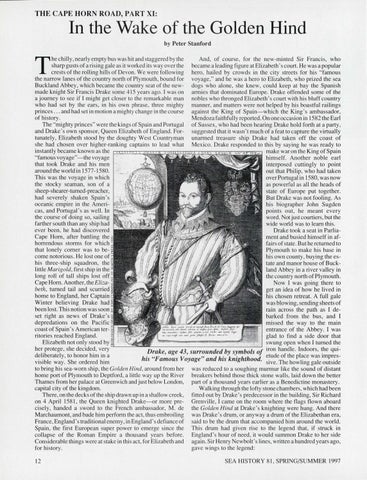 In the Wake of the Golden Hind by Peter Stanford

he chill y, nearly empty bus was hit and staggered by the And, of course, for the new-minted Sir Francis, who sharp gusts of a rising gale as it worked its way over the became a leading figure at Elizabeth's court. He was a popular crests of the rolling hill s of Devon. We were following hero, hailed by crowds in the city streets for hi s "famous the narrow lanes of the country north of Plymouth, bound for voyage," and he was a hero to Elizabeth, who prized the sea Buckland Abbey, which became the country seat of the new- dogs who alone, she knew, could keep at bay the Spanish made knight Sir Francis Drake some 415 years ago. I was on arrnies that dominated Europe. Drake offended some of the a journey to see if I might get closer to the remarkable man nobles who thronged Elizabeth 's court with his bluff country who had set by the ears, in his own phrase, three mighty manner, and matters were not helped by his boastful railings princes ... and had set in motion a mighty change in the course against the King of Spain-which the King's ambassador, of history. Mendoza faithfully reported. On one occasion in 1582 the Earl The "mighty princes" were the·kings of Spain and Portugal of Sussex, who had been hearing Drake hold forth at a party, and Drake 's own sponsor, Queen Elizabeth of England. For- suggested that it wasn ' t much of a feat to capture the virtually tunately, Elizabeth stood by-the doughty West Countryman unanned treasure ship Drake had taken off the coast of she had chosen over hi gher-ranking captains to lead what Mexico. Drake responded to this by saying he was ready to instantly became known as the •., make war on the King of Spain "famous voyage"-the voyage himse lf. Another noble earl that took Drake and his men interposed cuttingly to point out that Philip, who had taken around the world in 1577-1580. . c This was the voyage in which over Portugal in 1580, was now the stocky seaman, son of a as powerful as all the heads of sheep-shearer-turned-preacher, state of Europe put together. had severely shaken Spain's But Drake was not fooling. As oceanic empire in the Amerihi s biographer John Sugden points out, he meant every cas, and Portugal's as well. In word. Not just courtiers, but the the course of doing so, sailing farther south than any ship had wide world was to learn this. ever been , he had discovered Drake took a seat in ParliaCape Horn , after battling the ment and busied himself in affairs of state. But he returned to horrendous storrns for which ~ Plymouth to make his base in that lonely corner was to be- ~ come notorious. He lost one of : hi s own county, buying the eshi s three-ship squadron , the tate and manor house ofBucklittle Marigold, first ship in the ~ land Abbey in a river valley in long roll of tall ships lost off ~ the country north of Plymouth. Cape Horn. Another, the Eliza- ~ Now J was going there to beth, turned tail and scurried ~ get an idea of how he lived in home to England, her Captain a his chosen retreat. A full gale Winter believing Drake had ~ was blowing, sending sheets of been lost. This notion was soon ~ rain across the path as I deset right as news of Drake 's~ barked from the bus , and I depredations on the Pacific ~ missed the way to the main :!·7:,J!~·:,;:-:·.'t.J·".:.f.;;;·:~~·t+~·;,P;·t;.:~ ',7;.J:]:::· '"' entrance of the Abbey. I was coast of Spain's American ter- ~ ,..~ ' "t"'""' . fi~ f"F13J, . .".c"' 1~1.k. - · •r..n ''':Jtr ritories reached England. ~ ! ... ... ~,,,.- ~,. ,~p,.,,,,,µ ']),,.~ - ..,,, glad to find a side door that swung open when I turned the Elizabeth not only stood by ~ her protege, she decided, very Drake age 43 surrounded by symbols of iron handle. Indoors, ~he quideliberately, to honor him in a h. "F ' V' ,, d h. k . h h d etude of the place was 1mpreszs amous oyage an is mg t oo . s1ve. . Th e how 1mgga . v1·s·bl 1 e w ay. She ordere d h.1m 1eou ts1'd e to bring hi s sea-worn ship, the Golden Hind, around from her was reduced to a soughing murmur like the sound of distant home port of Plymouth to Deptford, a little way up the River breakers behind those thick stone walls , laid down the better Thames from her palace at Greenwich and just below London, part of a thousand years earlier as a Benedictine monastery. Walking through the lofty stone chambers, which had been capital city of the kingdom. There, on the decks of the ship drawn up in a shallow creek, fitted out by Drake's predecessor in the building, Sir Richard on 4 April 1581 , the Queen knighted Drake--or more pre- Grenville, I came on the room where the flags flown aboard cisely, handed a sword to the French ambassador, M. de the Golden Hind at Drake 's knighting were hung. And there Marchaumont, and bade him perfonn the act, thus embroiling was Drake 's drum, or anyway a drum of the Elizabethan era, France, England's traditional enemy, in England ' s defiance of said to be the drum that accompanied him around the world. Spain, the first European super power to emerge si nce the This drum had given rise to the legend that, if struck in collapse of the Roman Empire a thousand years before. England 's hour of need, it would summon Drake to her side Considerable things were at stake in this act, for Elizabeth and again. Sir Henry Newbolt's lines, written a hundred years ago, for hi story . gave wings to the legend: