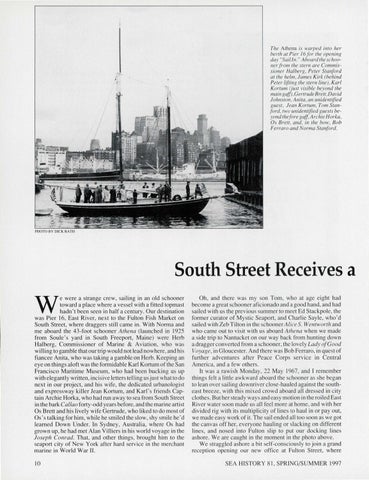 South Street Receives a e were a strange crew, sailing in an old schooner toward a place where a vessel with a fitted topmast hadn&#39;t been seen in half a century. Our destination was Pier 16 , East River, nex t to the Fulton Fish Market on South Street, where draggers still came in . With Norma and me aboard the 43-foot schooner Athena (launched in 1925 from Soule&#39;s yard in South Freeport, Maine) were Herb Halberg, Commissioner of Marine &amp; Aviation, who was wi II ing to gamble that our trip would not lead nowhere, and hi s fiancee Anita, who was taking a gamble on Herb. Keeping an eye on things aloft was the formidable Karl Kortum of the San Francisco Maritime Mu seum , who had been bucking us up with elegantl y written , inc isive letters telling us just whatto do next in ou r project, and hi s wife, the dedicated urbanol ogist and expressway killer Jean Kortum , and Karl &#39;s friend s Captain Arc hie Horka, who had run away to sea from South Street in the bark Callao forty-odd years before, and the marine artist Os Brett and his lively wife Gertrude, who liked to do most of Os &#39;s talking for him, whi le he smiled the slow , shy smile he&#39; d learned Down Under. In Sydney, Australia, where Os had grown up , he had met Alan Villiers in hi s world voyage in the Joseph Conrad. That, and other things , brought him to the seaport city of New York after hard service in the merchant marine in World War II.

Oh , and there was my son Tom , who at age eight had become a great schooner aficionado and a good hand, and had sai led with us the previ ous summer to meet Ed Stackpole, the former curator of Mystic Seaport, and Charlie Say le, who &#39;d sailed with Zeb Tilton in the schooner Alice S. Wentworth and who came out to visit with us aboard Athena when we made a side trip to Nantucket on our way back from hunting down a dragger converted from a schooner, the lovely Lady ofGood Voyage, in G loucester. And there was Bob Ferraro, in quest of further adventures after Peace Corps serv ice in Central America, and a few others . It was a rawis h Monday , 22 May 1967 , and I remember things fe lt a little awkward aboard the schooner as she began to lean over sailing downriver close-hauled against the southeast breeze, with thi s mi xed crowd aboard all dressed in city clothes. But her steady ways and easy motion in the roiled East Ri ver water soon made us all feel more at home, and with her divided rig with its multiplicity of lines to haul in or pay out, we made easy work of it. The sail ended all too soon as we got the canvas off her, everyo ne hauling or slack ing on different lines, and nosed into Fulton slip to put our docking lines ashore. We are caught in the moment in the photo above. We stragg led ashore a bit self-consciously to join a grand reception opening our new office at Fulton Street, where SEA HISTORY 81, SPRING/SUMMER 1997