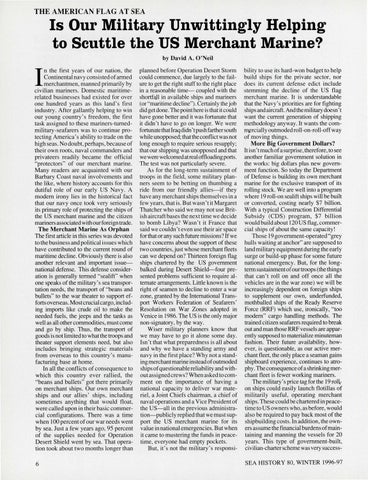 Is Our Military Unwittingly Helping to Scuttle the US Merchant Marine? by David A. O&#39;Neil n the first years of our nation, the Continental navy consisted of anned merchantmen, manned primarily by civilian mariners. Domestic maritimerelated businesses had existed for over one hundred years as this land &#39;s first industry. After gallantly helping to win our young country&#39;s freedom, the first task assigned to these mariners-tumedmilitary-seafarers was to continue protecting America&#39;s ability to trade on the high seas. No doubt, perhaps, because of their own roots, naval commanders and privateers readily became the official &quot;protectors&quot; of our merchant marine. Many readers are acquainted with our Barbary Coast naval involvements and the like, where history accounts for this dutiful role of our early US Navy . A modem irony lies in the hi storical fact that our navy once took very seriously its primary role of protecting the ships of the US merchant marine and the citizen mariners associated with our foreign trade. The Merchant Marine As Orphan The first article in this series was devoted to the business and political issues which have contributed to the current round of maritime decline. Obviously there is also another relevant and important issuenational defense. This defense consideration is generally tenned &quot;sealift&quot; when one speaks of the military&#39;s sea transportation needs, the transport of &quot;beans and bullets&quot; to the war theater to support efforts overseas. Most crucial cargo, including imports like crude oil to make the needed fuels , the jeeps and the tanks as well as al1other commodities, must come and go by ship. Thus, the transport of goods is not limited to what the troops and theater support elements need, but also includes bringing strategic materials from overseas to this country&#39;s manufacturing base at home. In all the conflicts of consequence to which this country ever rallied, the &quot;beans and bullets&quot; got there primarily on merchant ships. Our own merchant ships and our allies&#39; ships, including sometimes anything that would float, were called upon in their basic commercial configurations. There was a time when 100 percent of our war needs went by sea. Just a few years ago, 95 percent of the supplies needed for Operation Desert Shield went by sea. That operation took about two months longer than

planned before Operation Desert Stonn could commence, due largely to the failure to get the right stuff to the right place in a reasonable time- coupled with the shortfa,11 in available ships and mariners (or &quot; maritime decline&quot;). Certainly the job did get done. The point here is that it could have gone better and it was fortunate that it didn&#39;t have to go on longer. We were fortunate that Iraq didn&#39;t push farther south while unopposed; that the conflict was not long enough to require serious resupply; that our shipping was unopposed and that wewerewelcomedatrealoffloadingports. The test was not particularly severe. As for the long-tenn sustainment of troops in the field, some military planners seem to be betting on thumbing a ride from our friendly allies-if they have any merchant ships themselves in a few years, that is. But wasn&#39;t it Margaret Thatcher who said we may not use British aircraft bases the next time we decide to bomb Libya? Wasn &#39; t it France that said we couldn&#39;t even use their air space for that or any such future missions? If we have concerns about the support of these two countries, just whose merchant fleets can we depend on? Thirteen foreign flag ships chartered by the US government balked during Desert Shield-four presented problems sufficient to require alternate arrangements. Little known is the right of seamen to decline to enter a war zone, granted by the International Transport Workers Federation of Seafarers&#39; Resolution on War Zones adopted in Venice in 1986. The US is the only major non-signatory, by the way. Wiser military planners know that we may have to go it alone some day. Isn&#39;t that what preparedness is all about and why we have a standing anny and navy in the first place? Why not a standing merchant marine instead of outmoded ships of questionable reliability and without assigned crews? When asked to comment on the importance of having a national capacity to deliver war materiel, a Joint Chiefs chainnan, a ch ief of naval operations and a Vice President of the US-all in the previous administration-publicly replied that we must support the US merchant marine for its value in national emergencies. But when it came to mustering the funds in peacetime, everyone had empty pockets. But, it &#39;s not the military&#39;s responsi-

bility to use its hard-won budget to help build ships for the private sector, nor does its current defense edict include stemm ing the decline of the US flag merchant marine. It is understandable that the Navy&#39;s priorities are for fighting ships and aircraft. And the mi 1itary doesn&#39;t want the current generation of shipping methodology anyway. It wants the comrru:rcially outmoded roll-on-roll-off way of moving things . More Big Government Dollars? It isn &#39;tmuch ofa surprise, therefore, to see another fami liar government solution in the works: big dollars plus new government function. So today the Department of Defense is building its own merchant marine for the exclusive transport of its rolling stock. We are well into a program where 19 roll-on sealift ships will be built or converted, costing nearly $7 billion. With a typical Construction Differential Subsidy (CDS) program, $7 billion wou ld build about 120 US flag, commercial ships of about the same capacity! Those 19 government-operated &quot;grey hull s waiting at anchor&quot; are supposed to land military equipment during the early surge or bui ld-up phase for some future national emergency. But, for the longtenn sustainment of our troops (the things that can&#39;t roll on and off once all the vehicles are in the war zone) we will be increasingly dependent on foreign ships to supplement our own, underfunded, mothballed ships of the Ready Reserve Force (RRF) which use, ironically, &quot;too modem&quot; cargo handling methods. The trained citizen seafarers required to break out and man those RRF vessels are apparently supposed to materialize minuteman fashion . Their future availability, however, is questionable, as our active merchant fleet, the only place a seaman gains shipboard experience, continues to atrophy. The consequence ofa shrinking merchant fleet is fewer working mariners. The military &#39;s price tag for the 19 rollon ships could easily launch flotillas of militarily useful , operating merchant ships. These could be chartered in peacetime to US owners who, as before, would also be required to pay back most of the shipbuilding costs. In addition, the owners assume the financial burdens of maintaining and manning the vessels for 20 years. This type of government-built, civilian-charter scheme was very successSEA HISTORY 80, WINTER 1996-97