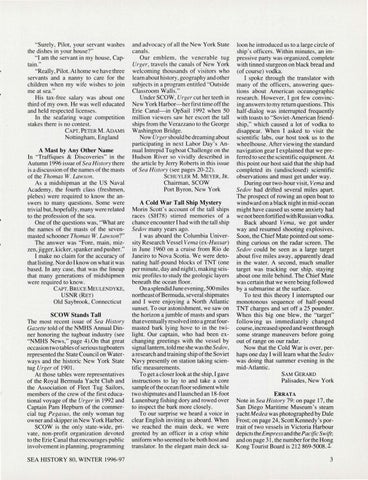 &quot;Surely, Pilot, your servant washes the dishes in your house?&quot; &quot;I am the servant in my house, Captain. &quot; &quot;Really , Pilot. At home we have three servants and a nanny to care for the children when my wife wishes to join me at sea.&quot; His tax-free salary was about one third of my own. He was well educated and held respected licenses. In the seafaring wage competition stakes there is no contest. CAPT. PETER M. ADAMS Nottingham, England

A Mast by Any Other Name In &quot;Traffiques &amp; Discoveries&quot; in the Autumn 1996 issue of Sea History there is a discussion of the names of the masts of the Thomas W. Lawson. As a midshipman at the US Naval Academy, the fourth class (freshmen, plebes) were required to know the answers to many questions. Some were trivial but, hopefully , many were related to the profession of the sea. One of the questions was, &quot;What are the names of the masts of the sevenmasted schooner Thomas W. Lawson?&quot; The answer was &quot;Fore, main, mizzen,jigger, kicker, spanker and pusher.&quot; I make no claim for the accuracy of that listing. Nor do I know on what it was based. In any case, that was the lineup that many generations of midshipmen were required to know. CAPT. BRUCEMEULENDYKE, USNR (RET) Old Saybrook, Connecticut

SCOW Stands Tall The most recent issue of Sea History Gazette told of the NMHS Annual Dinner honoring the tugboat industry (see &quot;NMHS News,&quot; page 4).0n that great occasion two tables of serious tug boaters represented the State Council on Waterways and the historic New York State tug Urger of 1901. At those tables were representatives of the Royal Bermuda Yacht Club and the Association of Fleet Tug Sailors, members of the crew of the first educational voyage of the Urger in 1992 and Captain Pam Hepburn of the commercial tug Pegasus, the only woman tug owner and skipper in New York Harbor. SCOW is the only state-wide, private, non-profit organization devoted to the Erie Canal that encourages public involvement in planning, programming SEA HISTORY 80, WINTER 1996-97

and advocacy of al I the New York State canals. Our emblem , the venerable tug Urger, travel s the canals of New York welcoming thousands of visitors who learn about hi story , geography and other subjects in a program entitled &quot;Outside Classroom Walls.&quot; Under SCOW, Urger cut her teeth in New York Harbor-her first time off the Erie Canal-in OpSail 1992 when 50 million viewers saw her escort the tall ships from the Verazzano to the George Washington Bridge. Now Urger should be dreaming about participating in next Labor Day &#39; s Annual Intrepid Tugboat Challenge on the Hudson River so vividly described in the article by Jerry Roberts in this issue of Sea History (see pages 20-22). SCHUYLER M. MEYER, JR . Chairman, SCOW Port Byron, New York

A Cold War Tall Ship Mystery Morin Scott&#39;s account of the tall ships races (SH78) stirred memories of a chance encounter I had with the tall ship Sedov many years ago. I was aboard the Columbia University Research Vessel Verna (ex-Hussar) in June 1960 on a cruise from Rio de Janeiro to Nova Scotia. We were detonating half-pound blocks of TNT (one per minute, day and night) , making seismic profiles to study the geologic layers beneath the ocean floor. On a splendid June evening, 500 miles northeast of Bermuda, several shipmates and I were enjoying a North Atlantic sunset. To our astonishment, we saw on the horizon a jumble of masts and spars that eventually resolved into a great fourmasted bark lying hove to in the twilight. Our captain, who had been exchanging greetings with the vessel by signal lantern, told me she was theSedov, a research and training ship of the Soviet Navy presently on station taking scientific measurements. To get a closer look at the ship, I gave instructions to lay to and take a core sample of the ocean floor sediment while two shipmates and I launched an 18-foot Lunenburg fishing dory and rowed over to inspect the bark more closely. To our surprise we heard a voice in clear English inviting us aboard. When we reached the main deck , we were greeted by an officer in a crisp white uniform who seemed to be both host and translator. In the elegant main deck sa-

loon he introduced us to a large circle of ship &#39;s officers. Within minutes, an impressive party was organized, complete with tinned sturgeon on black bread and (of course) vodka. I spoke through the translator with many of the officers, answering questions about American oceanographic research. However, I got few convincing answers to my return questions. This half-dialog was interrupted frequently with toasts to &quot; Soviet~A merican friendship,&quot; which caused a lot of vodka to di sappear. When I asked to visit the scientific labs, our host took us to the wheelhouse. After viewing the standard navigation gear I explained that we preferred to see the scientific equipment. At this point our host said that the ship had completed its (undisclosed) scientific observations and must get under way. During our two-hour visit, Verna and Sedov had drifted several miles apart. The prospect of rowing an open boat to windward on a black night in mid-ocean might have caused us some anxiety had we not been fortified with Russian vodka. Back aboard Verna, we got under way and resumed shooting explosives. Soon, the Chief Mate pointed out something curious on the radar screen. The Sedov could be seen as a large target about five miles away, apparently dead in the water. A second, much smaller target was tracking our ship, staying about one mile behind. The Chief Mate was certain that we were being followed by a submarine at the surface. To test this theory I interrupted our monotonous sequence of half-pound TNT charges and set off a 25 pounder. When this big one blew, the &quot;target&quot; following us immediately changed course, increased speed and went through some strange maneuvers before going out of range on our radar. Now that the Cold War is over, perhaps one day I will learn what the Sedov was doing that summer evening in the mid-Atlantic. SAM GERARD Palisades, New York ERRATA Note in Sea History 79: on page 17, the San Diego Maritime Museum &#39;s steam yacht Medea was photographed by Dale Frost; on page 24, Scott Kennedy&#39;s portrait of two vessels in Victoria Harbour depicts the Empress and the Pacific Swift; and on page 31, the number for the Hong Kong Tourist Board is 212 869-5008. J,