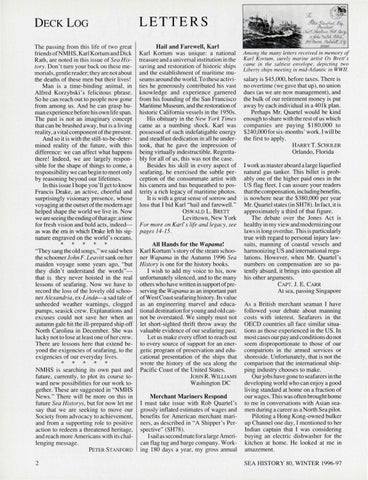 The passing from thi s life of two great friends ofNMHS , Karl Kortum and Dick Rath , are noted in this issue of Sea History. Don&#39;t tum your back on these memorials, gentle reader; they are not about the deaths of these men but their lives! Man is a time-binding animal, in Alfred Korzybski&#39;s fe licitous phrase. So he can reach out to people now gone from among us. And he can grasp human experience before his own life span. The past is not an imaginary concept that can be brushed away, but is a living reality , a vital component of the present. And so it is with the still-to-be-determined reality of the future , with thi s difference : we can affect what happens there! Indeed, we are largely responsible for the shape of things to come, a responsibility we can begin to meet only by reasoning beyond our lifetimes. In this issue I hope you &#39;II get to know Francis Drake, an active, cheerful and surprisingly visionary presence, whose voyaging at the outset of the modem age helped shape the world we live in. Now weareseeingtheendingofthatage: a time for fresh vision and bold acts, indeedas was the era in which Drake left his signature engraved on the world &#39;s oceans.

Hail and Farewell, Karl Karl Kortum was unique: a national treasure and a universal institution in the saving and restoration of historic ships and the establi shment of maritime museums around the world. To these activities he generously contributed hi s vast knowledge and experience garnered from hi s founding of the San Francisco Maritime Museum, and the restoration of hi storic California vessels in the 1950s. His obituary in the New York Times came as a numbing shock. Karl was possessed of such indefatigable energy and steadfast dedication in all he undertook, that he gave the impression of being virtually indestructible. Regrettably for all of us, this was not the case. Besides his skill in every aspect of seafaring, he exercised the subtle perception of the consummate artist with his camera and has bequeathed to posterity a rich legacy of maritime photos. It is with a great sense of sorrow and loss that I bid Karl &quot; hai l and farewell.&quot; Osw ALD L. BRETT Lev ittown, New York For more on Karl&#39; s life and legacy , see pages 14-15.

&quot;They sang the old songs,&quot; we said when the schooner John F . Leavitt sank on her maiden voyage some years ago, &quot; but they didn&#39;t understand the words&quot;that is they never hoisted in the real lessons of seafaring. Now we have to record the loss of the lovely old schooner Alexandria, ex-LindÂ˘-a sad tale of unheeded weather warnings, clogged pumps, seas ick crew. Explanations and excuses could not save her when an autumn gale hit the ill-prepared ship off North Carolina in December. She was lucky not to lose at least one of her crew. There are lessons here that ex tend beyond the exigencies of seafaring, to the ex igencies of our everyday lives.

NMHS is searching its own past and future, currently, to plot its course toward new possibilities for our work together. These are suggested in &quot;NMHS News.&quot; There will be more on thi s in future Sea Historys , but for now let me say that we are seeking to move our Society from advocacy to achievement, and from a supporting role to positive action to redeem a threatened heritage, and reach more Americans with its challenging message. PETER STANFORD

All Hands for the Wapama! Karl Kortum &#39;s story of the steam schooner Wapama in the Autumn 1996 Sea History is one for the history books. I wish to add my voice to his, now unfortunately silenced, and to the many others who have written in support of preserving the Wapama as an important part of West Coast seafaring hi story. Its value as an engineering marvel and educational destination for young and old cannot be overstated. We simply must not let short-sighted thrift throw away the valuable evidence of our seafaring past. Let us make every effort to reach out to every source of support for an energetic program of preservation and educational presentation of the ships that wrote the history of the sea along the Pacific Coast of the United States. JOHN R. WILLIAMS Washington DC Merchant Mariners Respond I must take issue with Rob Quartet&#39;s grossly inflated estimates of wages and benefits for American merchant mari ners, as descri bed in &quot; A Shipper&#39;s Perspective&quot; (SH78). I sail as second mate for a large American flag tug and barge company. Working 180 days a year, my gross annual

Among the many letters received in memory of Karl Kortum , surely marine artist Os Brett&#39;s came in the saltiest envelope, depicting two Liberty ships meeting in mid-Atlantic in WWII.

salary is $45,000, before taxes. There is no overtime (we gave that up), no union dues (as we are now management), and the bulk of our retirement money is put away by each individual in a 40lk plan. Perhaps Mr. Quartet would be kind enough to share with the rest of us which compani es are paying $ 180,000 to $240,000forsix-months&#39; work. I will be the first to apply . HARR YT. SCHOLER Orlando, Florida I work as master aboard a large liquefied natural gas tanker. This billet is probably one of the higher paid ones in the US flag fl eet. I can assure your readers that the compensation, including benefits, is nowhere near the $380,000 per year Mr. Quartet states (in SH78). In fact, it is approximately a third of that figure. The debate over the Jones Aet is healthy in my view and modernizing our laws is long overdue. This is particularly true with regard to personal injury lawsuits, manning of coastal vessels and harmonizing US and international regulations. However, when Mr. Quartel&#39; s numbers on compensation are so patently abs urd, it brings into question all hi s other arguments. CAPT.

At sea, passing Singapore As a British merchant seaman I have followed your debate about manning costs with interest. Seafarers in the OECD countries all face similar situations as those experienced in the US. In most cases our pay and conditions do not seem disproportionate to those of our compatriots in the armed services or shores ide. Unfortunately , that is not the compari son that the international shipping industry chooses to make. Our jobs have gone to seafarers in the developing world who can enjoy a good living standard at home on a fraction of our wages. This was often brought home to me in conversations with Asian seamen during a career as a North Sea pilot. Piloting a Hong Kong-owned bulker up Channel one day, I mentioned to her Indian captain that I was considering buying an electric dishwasher for the kitchen at home. He looked at me in amazement. SEA HISTORY 80, WINTER 1996-97