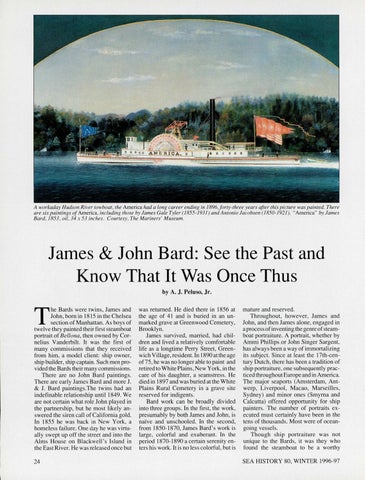 James &amp; John Bard: See the Past and Know That It Was Once Thus by A. J. Peluso, Jr. he Bards were twins, James and John, born in 1815 in the Chelsea section of Manhattan. As boys of twelve they painted their first steamboat portrait of Bellona, then owned by Cornelius Vanderbilt. It was the first of many commissions that they received from him , a model client: ship owner, ship builder, ship captain. Such men provided the Bards their many commissions. There are no John Bard paintings. There are early James Bard and more J. &amp; J. Bard paintings.The twins had an indefinable relationship until 1849. We are not certain what role John played in the partnership, but he most likely answered the siren call of California gold. In 1855 he was back in New York, a homeless failure. One day he was virtually swept up off the street and into the Alms House on Blackwell&#39;s Island in the East River. He was released once but

was returned. He died there in 1856 at the age of 41 and is buried in an unmarked grave at Greenwood Cemetery, Brooklyn. James survived, married , had children and lived a relatively comfortable life as a longtime Perry Street, Greenwich Village, resident. In 1890 at the age of75, he was no longer able to paint and retired to White Plains, New York, in the care of his daughter, a seamstress. He died in 1897 and was buried at the White Plains Rural Cemetery in a grave site reserved for indigents. Bard work can be broadly divided into three groups. In the first, the work, presumably by both James and John, is naYve and unschooled. In the second, from 1850-1870, James Bard&#39;s work is large, colorful and exuberant. In the period 1870-1890 a certain serenity enters his work. It is no less colorful, but is

mature and reserved. Throughout, however, James and John, and then James alone, engaged in a process ofinventing the genre of steamboat portraiture. A portrait, whether by Ammi Phillips .or John Singer Sargent, has always been a way of immortalizing its subject. Since at least the 17th-century Dutch, there has been a tradition of ship portraiture, one subsequently practiced throughout Europe and in America. The major seaports (Amsterdam, Antwerp, Liverpool, Macao, Marseilles, Sydney) and minor ones (Smyrna and Calcutta) offered opportunity for ship painters. The number of portraits executed must certainly have been in the tens of thousands. Most were of oceangoing vessels. Though ship portraiture was not unique to the Bards, it was they who found the steamboat to be a worthy SEA HISTORY 80, WINTER 1996-97