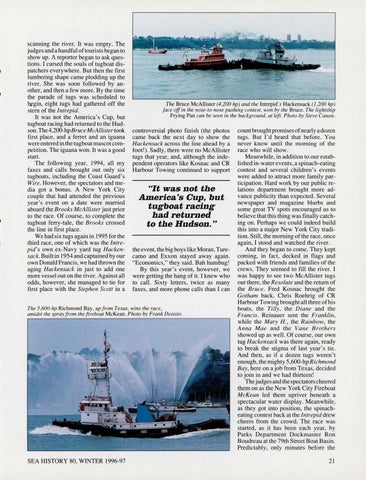 scanning the river. It was empty. The judges and a handful of tourists began to show up. A reporter began to ask questions . I cursed the souls of tugboat dispatchers everywhere. But then the first lumbering shape came plodding up the river. She was soon followed by another, and then a few more. By the time the parade of tugs was scheduled to b~gin, eight tugs had gathered off the stem of the Intrepid. It was not the America&#39;s Cup, but tugboat racing had returned to the Hudson. The4,200-hpBruceMcAllistertook first place, and a ferret and an iguana were entered in the tug boat mascot competition. The iguana won. It was a good start. The following year, 1994, all my faxes and call s brought out only six tugboats, including the Coast Guard&#39;s Wire. However, the spectators and media got a bonus. A New York City couple that had attended the previous year&#39;s event on a date were married aboard the Brooks McAllister just prior to the race. Of course, to complete the tugboat ferry-tale, the Brooks crossed the line in first place. We had six tugs again in 1995 for the third race, one of which was the lntrepid&#39;s own ex-Navy yard tug Hackensack. Built in 1954 and captained by our own Donald Francis, we had thrown the aging Hackensack in just to add one more vessel out on the river. Against all odds, however, she managed to tie for first place with the Stephen Scott in a

The Bruce McAllister (4 ,200 hp) and the Intrepid&#39; s Hackensack (1 ,200 hp) face off in the nose-to-nose pushing contest, won by the Bruce. The lightship Frying Pan can be seen in the background, at left. Photo by Steve Canon.

controversial photo finish (the photos came back the next day to show the Hackensack across the line ahead by a foot!) . Sadly, there were no McAllister tugs that year, and, although the independent operators like Kosnac and CR Harbour Towing continued to support

ult was not the America&#39;s Cup, but tugboat racing had returned to the Hudson.&quot; the event, the big boys like Moran, Turecamo and Exxon stayed away again. &quot;Economics,&quot; they said. Bah humbug! By this year&#39;s event, however, we were getting the hang of it. I knew who to call. Sixty letters , twice as many faxes, and more phone calls than I can

The 5,600-hp Richmond Bay, up from Texas, wins the race, amidst the spray from the fireboat McKean. Photo by Frank Desisto.

count brought promises of nearly a dozen tugs. But I&#39;d heard that before. You never know until the morning of the race who will show. Meanwhile, in addition to our established in-water events, a spinach-eating contest and several children&#39;s events were added to attract more family participation . Hard work by our public relations department brought more advance publicity than expected. Several newspaper and magazine blurbs and some great TV spots encouraged us to believe that this thing was finally catching on. Perhaps we could indeed build this into a major New York City tradition. Still, the morning of the race, once again, I stood and watched the river. And they began to come. They kept coming, in fact, decked in flags and packed with friends and families of the crews. They seemed to fill the river. I was happy to see two McAllister tugs out there, the Resolute and the return of the Bruce. Fred Kosnac brought the Gotham back, Chris Roehrig of CR Harbour Towing brought all three of his boats, the Tilly, the Diane and the Francis. Reinauer sent the Franklin, while the Mary H., the Rainbow, the Anna Mae and the Vane Brothers showed up as well. Of course, our own tug Hackensack was there again, ready to break the stigma of last year&#39;s tie. And then, as if a dozen tugs weren&#39;t enough, the mighty 5,600-hpRichmond Bay, here on a job from Texas, decided to join in and we had thirteen! The judges and the spectators cheered them on as the New York City Fireboat McKean led them upriver beneath a spectacular water display. Meanwhile, as they got into position , the spinacheating contest back at the Intrepid drew cheers from the crowd. The race was started, as it has been each year, by Parks Department Dockmaster Ron Boudreau at the 79th Street Boat Basin. Predictably, only minutes before the 21