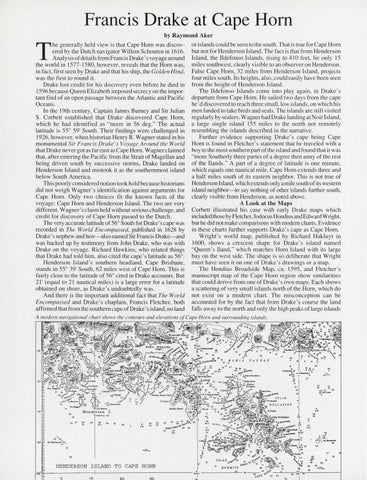 Francis Drake at Cape Horn by Raymond Aker he generally held view is that Cape Horn was discovered by the Dutch navigator Willem Schouten in 1616. Analysis of details from Francis Drake's voyage around the world in 1577-1580, however, reveals that the Horn was, in fact, first seen by Drake and that his ship, the Golden Hind, was the first to round it. Drake lost credit for his discovery even before he died in 1596 because Queen Elizabeth imposed secrecy on the important find of an open passage between the Atlantic and Pacific Oceans. In the 19th century, Captain James Burney and Sir Julian S. Corbett established that Drake discovered Cape Horn, which he had identified as " neere in 56 deg." The actual latitude is 55° 59' South. Their findings were challenged in 1926, however, when historian Henry R. Wagner stated in his monumental Sir Francis Drake's Voyage Around the World that Drake never got as far east as Cape Horn. Wagner claimed that, after entering the Pacific from the Strait of Magellan and being driven south by successive storms, Drake landed on Henderson Island and mistook it as the southernmost island below South America. This poorly considered notion took hold because historians did not weigh Wagner's identification against arguments for Cape Horn . Only two choices fit the known facts of the voyage: Cape Horn and Henderson Island. The two are very different. Wagner's claim held without serious challenge, and credit for discovery of Cape Horn passed to the Dutch. The very accurate latitudeof56° South for Drake 's cape was recorded in The World Encompassed, published in 1628 by Drake 's nephew and heir-also named Sir Francis Drake-and was backed up by testimony from John Drake, who was with Drake on the voyage. Richard Hawkins, who related things that Drake had told him, also cited the cape's latitude as 56°. Henderson Island 's southern headland , Cape Brisbane, stands in 55° 39' South, 62 miles west of Cape Horn. This is fairly close to the latitude of 56° cited in Drake accounts. But 21' (equal to 21 nautical miles) is a large error for a latitude obtained on shore, as Drake's undoubtedly was. And there is the important additional fact that The World Encompassed and Drake 's chap lain, Francis Fletcher, both affirmed that from the southern cape of Drake 's island, no land

or islands could be seen to the south . That is true for Cape Horn but not for Henderson Island . The fact is that from Henderson Island, the Ildefonso Islands , rising to 410 feet, lie only 15 miles southwest, clearly visible to an observer on Henderson. False Cape Horn, 32 miles from Henderson Island, projects four miles south. Its heights, also, cou ld easi ly have been seen from the height of Henderson Island . The Ildefonso Islands come into play again, in Drake 's departure from Cape Horn. He sailed two days from the cape he'd discovered to reach three small , low islands, on which hi s men landed to take birds and seals. The islands are still visited regularly by sealers. Wagner had Drake landing atNoir Island , a large single island 155 miles to the north not remotely resembling the islands described in the narrative. Further evidence supporting Drake's cape being Cape Horn is found in Fletcher's statement that he traveled with a boy to the most southern part of the island and found that it was "more Southerly three partes of a degree then anny of the rest of the Ilands ." A part of a degree of latitude is one minute, which equals one nautical mile. Cape Horn extends three and a half miles south of its eastern neighbor. This is not true of Henderson Island, which extends only a mile south of its western island neighbor-to say nothing of other islands further south, clearly visible from Henderson, as noted above. A Look at the Maps Corbett illustrated his case with early Drake maps which included those by Fletcher, Jodocus Hondi us and Ed ward Wright, but he did not make comparisons with modern charts. Evidence in these charts further supports Drake's cape as Cape Horn. Wright's world map, published by Richard Hakluyt in 1600, shows a crescent shape for Drake 's island named "Queen's Iland," which matches Horn Island with its large bay on the west side. The shape is so deliberate that Wright must have seen it on one of Drake 's drawings or a map. The Hondius Broadside Map, ca. 1595, and Fletcher's manuscript map of the Cape Horn region show similarities that could derive from one of Drake 's own maps. Each shows a scattering of very small islands north of the Horn , which do not exist on a modern chart. The misconception can be accounted for by the fact that from Drake 's course the land falls away to the north and on ly the high peaks oflarge islands

6 THE AMERICA FLAG AT SEA: ls Our Military Unwittingly Helping to Scuttle the US Merchant Marine? by David A. O'Neil • 8 CAPE HORN ROAD, X:...

6 THE AMERICA FLAG AT SEA: ls Our Military Unwittingly Helping to Scuttle the US Merchant Marine? by David A. O'Neil • 8 CAPE HORN ROAD, X:...