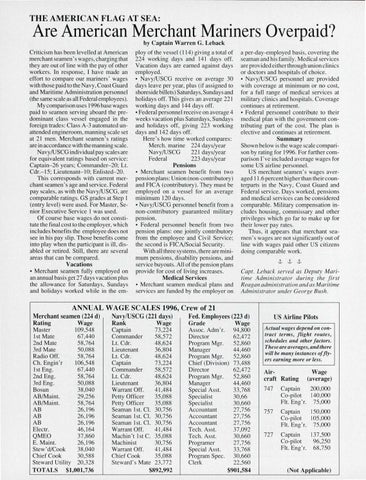 THE AMERICAN FLAG AT SEA:

Are American Merchant Mariners Overpaid? by Captain Warren G. Leback Criticism has been levelled at American merchant seamen&#39;s wages, charging that they are out of line with the pay of other workers. In response, I have made an effort to compare our mariners&#39; wages with those paid to the Navy, Coast Guard and Maritime Administration personnel (the same scale as all Federal employees). My comparison uses 1996 base wages paid to seamen serving aboard the predominant class vessel engaged in the foreign trades: Class A-3 automated unattended engineroom, manning scale set at 21 men. Merchant seamen &#39; s ratings are in accordance with themanning scale. Navy/USCG individual pay scales are for equivalent ratings based on service: Captain-26 years; Commander-20; Lt. Cdr.-15; Lieutenant-IO; En listed-20. This corresponds with current merchant seamen &#39; s age and service. Federal pay scales, as with the Navy/USCG , are comparable ratings . GS grades at Step 1 (entry level) were used. For Master, Senior Executive Service 1 was used. Of course base wages do not constitute the final cost to the emp loyer, which includes benefits the employee does not see in his pay slip. Those benefits come into play when the participant is ill, disabled or retired. Still, there are several areas that can be compared. Vacations • Merchant seamen fully employed on an ann ual basis get 27 days vacation plus the allowance for Saturdays, Sundays and holidays worked while in the em-

ploy of the vessel (114) giving a total of 224 working days and 141 days off. Vacation days are earned against days employed. • Navy/USCG receive on average 30 days leave per year, plus (if assigned to shoreside billets) Saturdays, Sundays and holidays off. Thi s gives an average 221 working days and 144 days off. •Federal personnel receive on average 4 weeks vacation plus Saturdays, Sundays and holidays off, giving 223 working days and 142 days off. Here &#39;s how time worked compares: Merch. marine 224 days/year Navy/USCG 221 days/year Federal 223 days/year Pensions • Merchant seamen benefit from two pension plans: Union (non-contributory) and FICA (contributory) . They must be employed on a vessel for an average minimum 120 days. •Navy/USCG personnel benefit from a non-contributory guaranteed military pension. • Federal personnel benefit from two pension plans: one jointly contributory from the employee and Civi l Service; the second is FICA/Social Security. With all three systems , there are minimum pensions, disability pensions, and service buyouts. All of the pension plans provide for cost of living increases. Medical Services • Merchant seamen medical plans and services are funded by the employer on

a per-day-employed basis, covering the seaman and his family. Medical services are provided either through union clinics or doctors and hospitals of choice. • Navy/USCG personnel are provided with coverage at minimum or no cost, for a full range of medical services at military clinics and hospitals. Coverage continues at retirement. • Federal personnel contribute to their medical plan with the government contributing part of the cost. The plan is elective and continues at retirement. Summary Shown below is the wage scale comparison by rating for 1996. For further comparison I&#39; ve included average wages for some US airline personnel. US merchant seamen &#39; s wages averaged l l.6percenthigherthan their counterparts in the Navy, Coast Guard and Federal service. Days worked, pensions and medical services can be considered comparable. Military compensation includes housing, commissary and other privileges which go far to make up for their lower pay rates. Thus, it appears that merchant seamen &#39;s wages are not significantly out of line with wages paid other US citizens doing comparable work. J,

US Airline Pilots Actual wages depend on contract terms, flight routes, schedules and other factors. These are averages, and there will be many instances offlyers earning more or less.