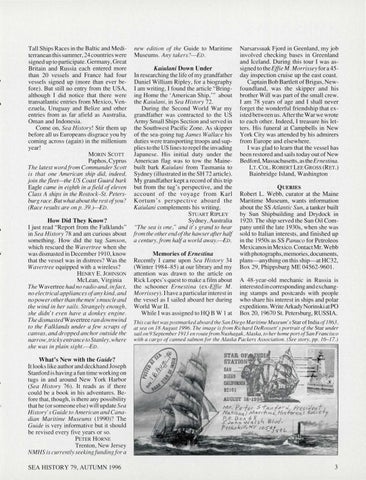 Tall Ships Races in the Baltic and Mediterranean thi s summer, 24 countries were signed up to participate. Germany , Great Britain and Russia each entered more than 20 vessels and France had four vessels signed up (more than ever before). But still no entry from the USA, although I did notice that there were transatlantic entries from Mexico , Venezuela, Urug uay and Belize and other entries from as far afield as Australi a, Oman and Indones ia. Come on, Sea History! Stir them up before all us E uropeans disgrace you by coming across (again) in the millenium year! MORIN SCOTI

Paphos, Cyprus The latest word from Commander Scott is that one American ship did, indeed, join the fleet-the US Coast Guard bark Eagle came in eighth in a field of eleven Class A ships in the Rostock-St. Petersburg race. But what about the rest ofyou ? (Race results are on p. 39.}-ED.

new edition of the Guide to Maritime Museums. Any takers ?-ED.

Kaiulani Down Under In researching the Iife of my grandfather Daniel William Ripley , for a biography I am writing , I fo und the article &quot; Bringing Home the &#39;American Ship, &quot;&#39; about the Kaiulani, in Sea History 72. During the Second World War my grandfather was contracted to the US Army Small Sh ips Section and served in the Southwest Pacific Zone. As skipper of the sea-goi ng tug James Wallace his duties were transporting troops and supplies to the US lines to repel the invading Japanese. Hi s initi a l duty under the American flag was to tow the Mainebui It bark Kaiulani from Tasmania to Sydney (illustrated in the SH 72 article). My grandfather kept a record of this trip but from the rug &#39;s perspective, and the account of the voyage from Karl Kortum &#39;s pers pective aboard the Kaiulani complements hi s writing. STUART RIPLEY

How Did They Know? I just read &quot;Report from the Falkl ands&quot; in Sea History 78 and am curious about something. How did the tug Samson, which rescued the Wavertree when she was dismasted in December 19 10, know that the vessel was in distrees? Was the Wavertree eq uipped with a wireless? HENRY E. JOHNSO McLean, Virginia The Wavertree had no radio and, in fact, no electrical appliances ofany kind, and no power other than the men&#39;s muscle and the wind in her sails. Strangely enough, she didn&#39;t even have a donkey engine. The dismastedWavertree ran downwind to the Falklands under a few scraps of canvas, and dropped anchor outside the narrow, tricky entrance to Stanley, where she was in plain sight.-ED.

Sydney, Australia &#39;&#39;The sea is one,&quot; and it&#39;s grand to hear from the other end ofthe hawser after half a century,from half a world away.-ED.

Memories of Ernestina Recently I came upon Sea History 34 (Winter 1984-85) at our library and my attention was drawn to the article on Rick Lopes &#39;s quest to make a film about the schooner Ernestina (ex-Effie M . Morrissey). I have a particular interest in the vessel as I sai led aboard her during World War II. While I was ass igned to HQ B W 1 at

Narsarssuak Fjord in Geenl and, my job involved checki ng bases in Greenland and Ice land. During this tour I was assigned to the Effie M. Morrissey for a45day inspection crui se up the east coast. Captai n Bob Bartlettof Brigus, Newfo undl and, was the skipper and hi s brother Will was part of the small crew. I am 78 years of age and I shall never forget the wo nderfu l friendship that existed between us. After the War we wrote to each other. Indeed, I treasure hi s letters . His funeral at Campbell s in New York City was attended by his admirers from E urope and elsewhere. I was glad to learn that the vessel has been restored and sails today out of New Bedford, Massachusetts, as the Ernestina. LT. COL. ROBERT LEE GROSS (R ET.)

Robert L. Webb, curator at the Maine Maritime Museum , wants information about the SS Atlantic Sun, a tanker built by Sun Shipbuilding and Drydock in 1920. The ship served the Sun Oil Company until the late 1930s, when she was sold to Italian interests, and finished up in the 1950s as SS Panuco for Petroleos Mexicanos in Mexico. Contact Mr. Webb with photographs, memories, documents, plans-anything on this ship-at HC32, Box 29, Phippsburg ME 04562-9601. A 48-year-o ld mechanic in Russia is interested in correspond ing and exchanging stamps and postcards with people who share his interest in ships and polar expeditions. Write Arkady Norinski at PO Box 20, 19670 St. Petersburg, RUSSIA.

This cachet was postmarked aboard the San Diego Maritime Muse um&#39; s Star oflndia of 1863, at sea on 18 August 1996. The image is from Richard DeRossett&#39; s portrait of the Star under sail on 9September 191 3 en routefromNushagak , Alaska, to her home port ofSan Francisco with a cargo of canned salmon for the Alaska Packers Association. (See story, pp. 16-17.)

What&#39;s New with the Guide? It looks like author and deckhand Joseph Stanford is having a fun time working on tugs in and aro und New York Harbor (Sea History 76). It reads as if there could be a book in his adve ntures. Before that, though, is there any possi bility thathe (or someone else) wi ll update Sea History&#39;s Guide to American and Canadian Maritime Museums (1990)? The Guide is very informative but it should be revi sed every five years or so. PETER HORN E