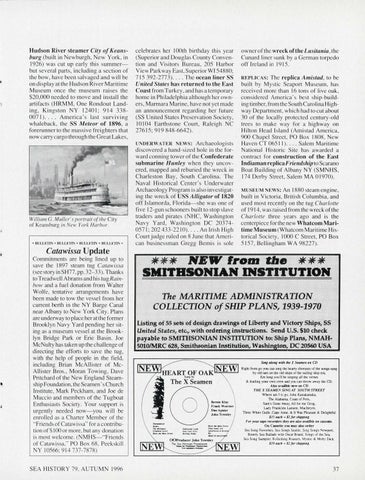 Hudson River steamer City of Keansburg (built in Newburgh, New York, in 1926) was cut up early this s ummerbut several parts, including a section of the bow, have been salvaged and will be on di splay at the Hudson River Maritime Museum once the museum raises the $20,000 needed to move and in stall the artifacts (HRMM, One Rondout Landing , Kingston NY 12401; 914 3380071 ) .. .. America&#39;s last surviving whaleback, the SS Meteor of 1896, a forerunner to the massive freighters that now carry cargo through the Great Lakes,

William G. Muller&#39;s portrait of the City of Keansburg in New York Harbor.

owner of the wreck of the Lusitania, the Cunard liner sunk by a German torpedo off Ireland in 1915 .

celebrates her I OOth birthday this year (Superior and Douglas County Convention and Visitors Bureau, 205 Harbor View Parkway East, Superior WI 54880; 715 392-2773) .... The ocean liner SS United States has returned to the East Coast from Turkey, and has a temporary home in Philadelphia although her owners, Marmara Marine, have not yet made an announcement regarding her future (SS United States Preservation Society, I 0104 Earths tone Court, Raleigh NC 27615; 919 848-6642).

An 1880 steam engine, built in Victoria, British Columbia, and used most recently on the tug Charlotte of 1914, was raised from the wreck of the Charlotte three years ago and is the centerpiece for the new Whatcom Maritime Museum (Whatcom Maritime Historical Society, 1000 C Street, PO Box 5157, Bellingham WA 98227). MUSEUM NEWS:

Commitments are being lined up to save the 1897 steam tug Catawissa (see story in SH77 , pp. 32- 33). Thanks to Treadwell Abrams and his tug Rainbow and a fuel donation from Walter Wolfe, tentative arrangements have been made to tow the vessel from her current berth in the NY Barge Canal near Albany to New York City. Plans are underway to place her at the former Brooklyn Navy Yard pending her siting as a museum vessel at the Brooklyn Bridge Park or Erie Basin. Joe McNulty has taken up the challenge of directing the efforts to save the tug, with the help of people in the field , including Brian McAllister of McAllister Bros., Moran Towing, Dave Pritchard of the New England Steamship Foundation, the Seamen &#39;s Church Institute, Mark Peckham, and Joe de Muccio and members of the Tugboat Enthusiasts Society. Your support is urgently needed now-you will be enrolled as a Charter Member of the &quot;Friends of Catawissa&quot; for a contribution of $ 100 or more, but any donation is most welcome. (NM HS-&quot;Friends of Catawissa:· PO Box 68, Peekskill NY 10566; 914 737-7878) SEA HISTORY 79. AUTUMN 1996