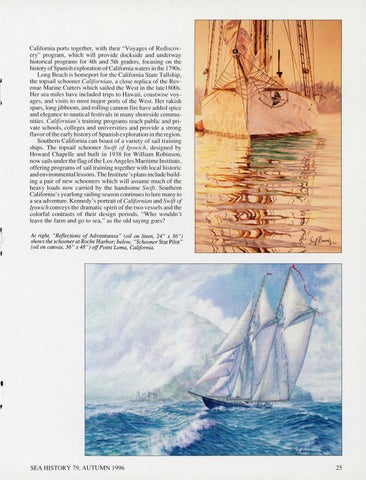 California ports together, with their &quot;Voyages of Rediscovery&quot; program, which will provide dockside and underway historical programs for 4th and 5th graders, focusing on the history of Spanish exploration of California waters in the 1790s. Long Beach is homeport for the California State Tallship, the topsail schooner Californian, a close replica of the Revenue Marine Cutters which sailed the West in the late 1800s. Her sea miles have included trips to Hawaii, coastwise voyages, and visits to most major ports of the West. Her rakish spars, long jibboom, and rolling cannon fire have added spice and elegance to nautical festivals in many shoreside communities . Californian&#39;s training programs reach public and private schools, colleges and universities and provide a strong flavorofthe early history of Spanish exploration in the region. Southern California can boast of a variety of sail training ships. The topsail schooner Swift of Ipswich, designed by Howard Chapelle and built in 1938 for William Robinson, now sails underthe flag of the Los Angeles Maritime Institute, offering programs of sail training together with local hi storic and environmental lessons. The lnstitute &#39;s plans include building a pair of new schooners which will assume much of the heavy loads now carried by the handsome Swift. Southern California&#39;s yearlong sailing season continues to lure many to a sea adventure. Kennedy &#39;s portrait of Californian and Swift of Ipswich conveys the dramatic spirit of the two vessels and the colorful contrasts of their design periods. &quot;Who wouldn&#39;t leave the farm and go to sea,&quot; as the old saying goes? At right, &quot;Reflections of Adventuress&quot; (oil on linen, 24&quot; x 36&quot;) shows the schooner at Roche Harbor; below, &quot;Schooner Star Pilot &quot; (oil on canvas, 36&quot; x 48&quot;) off Point Loma, California .