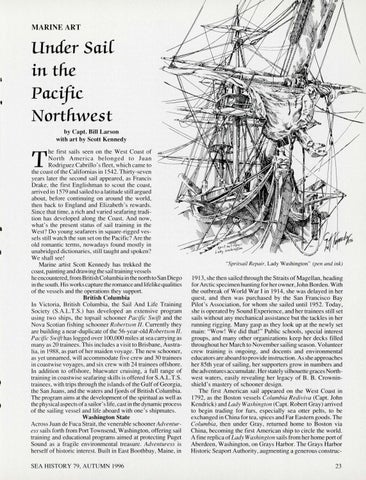 Under Sai[ in the Pacific Northwest by Capt. Bill Larson with art by Scott Kennedy he first sails seen on the West Coast of North America belonged to Juan ..., Rodriguez Cabrillo &#39; s fleet, which came to ~--~IH-~~~ the coast of the Californias in 1542. Thirty-seven years later the second sail appeared, as Francis Drake, the first Englishman to scout the coast, arrived in 1579 and sailed to a latitude sti ll argued about, before continuing on aro und the world, then back to England and Elizabeth &#39; s rewards. Since that time, a rich and varied seafaring tradition has developed along the Coast. And now , what &#39; s the present status of sail training in the West? Do young seafarers in square-rigged vessels still watch the sun set on the Pacific? Are the old romantic terms, nowadays found mostl y in unabridged dictionaries, sti ll taught and spoken? We shall see! &quot;Spritsail Repair, Lady Washington &quot; (pen and ink) Marine artist Scott Kennedy has trekked the coast, painting and drawing the sail training vessels he encountered, from British Columbia in the north to San Diego 1913, she then sailed through the Straits of Magellan , heading in the south. His works capture the romance and Iifel ike qua!ities for Arctic specimen hunting for herowner, John Borden. With the outbreak of World War I in 1914, she was delayed in her of the vessels and the operations they support. quest, and then was purchased by the San Francisco Bay British Columbia In Victoria, British Columbia, the Sail And Life Training Pilot &#39; s Association, for whom she sailed until 1952. Today, she is operated by Sound Experience, and her trainees still set Society (S.A.L.T.S.) has developed an extensive program sails without any mechanical assistance but the tackles in her using two ships, the topsai l schooner Pacific Swift and the Nova Scotian fishing schooner Robertson II. Currently they running rigging. Many gasp as they look up at the newly set are building a near-duplicate of the 56-year-old Robertson II. main: &quot;Wow ! We did that! &quot; Public school s, special interest groups, and many other organizations keep her decks filled Pacific Swift has logged over 100,000 miles at sea carrying as throughout her March to November sailing season. Volunteer many as 20 trainees. This includes a visit to Brisbane, Australia, in 1988 , as part of her maiden voyage. The new schooner, crew training is ongoing, and docents and environmental as yet unnamed, will accommodate five crew and 30 trainees educators are aboard to provide instruction . As she approaches in coastwise voyages , and six crew with 24 trainees offshore. her 85th year of sailing, her supporters grow in numbers and In addition to offshore, bluewater crui sing, full range of the adventures accumulate. Her stately silhouette graces Northtraining in coastwise seafaring sk ill s is offered for S.A.L.T.S. west waters, easi ly revealing her legacy of B. B. Crowninshie ld &#39; s mastery of schooner design . trainees , with trips through the islands of the Gulf of Georgia, the San Juans, and the waters and fjords of British Columbia. The first American sail appeared on the West Coast in The program aims at the development of the spiritual as well as 1792, as the Boston vessels Columbia R ediviva (Capt. John the physical aspects ofa sailor&#39; s life, cast in the dynamic process Kendrick) and Lady Washington (Capt. Robert Gray) arrived to begin trading for furs, especiall y sea otter pelts, to be of the sai ling vessel and life aboard with one&#39;s shipmates. Washington State exchanged in China for tea, spices and Far Eastern goods. The Across Juan de Fuca Strait, the venerable schooner AdventurColumbia, then under Gray, returned home to Boston via ess sail s forth from Port Townsend, Washington, offering sail China, becom ing the first American ship to circle the world. A fine replica of Lady Washington sails from her home port of training and educational programs aimed at protecting Puget Sound as a fragile environmental treasure. Adventuress is Aberdeen , Washington, on Grays Harbor. The Grays Harbor herself of hi storic interest. Built in East Boothbay, Maine, in Hi storic Seaport Authority, augmenting a generous construe-