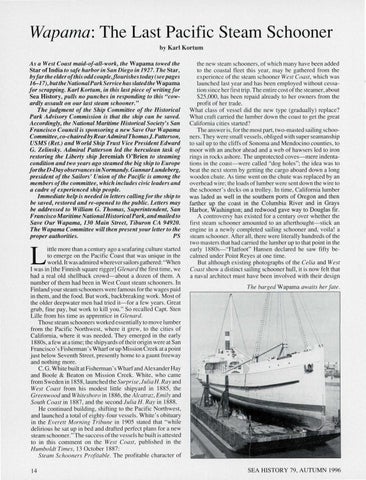 Wapama: The Last Pacific Steam Schooner by Karl Kortum As a West Coast maid-of-all-work, the Wapama towed the Star oflndia to safe harbor in San Diego in 1927. The Star, by far the elder ofthis odd couple,flourishes today (see pages 16-17), butthe NationalParkService has slated the Wapama for scrapping. Karl Kortum, in this last piece of writing for Sea History, pulls no punches in responding to this &quot;cowardly assault on our last steam schooner.&quot; The judgment of the Ship Committee of the Historical Park Advisory Commission is that the ship can be saved. Accordingly, the National Maritime Historical Society&#39;s San Francisco Council is sponsoring a new Save Our Wapama Committee,co-chairedbyRearAdmiralThomasJ.Patterson, USMS (Ret.) and World Ship Trust Vice President Edward G. Zelinsky. Admiral Patterson led the herculean task of restoring the Liberty ship Jeremiah O&#39;Brien to steaming condition and two years ago steamed the big ship to Europe for the D-Day observances in Normandy. Gunnar Lunde berg, president of the Sailors&#39; Union of the Pacific is among the members of the committee, which includes civic leaders and a cadre of experienced ship people. Immediate help is needed in letters calling for the ship to be saved, restored and re-opened to the public. Letters may be addressed to William G. Thomas, Superintendent, San Francisco Maritime National Historical Park, and mailed to Save Our Wapama, 130 Main Street, Tiburon CA 94920. The Wapama Committee will then present your letter to the proper authorities. PS ittle more than a century ago a seafaring culture started to emerge on the Pacific Coast that was unique in the world. It was admired wherever sailors gathered: &quot;When I was in [the Finnish square rigger] Glenard the first time, we had a real old shellback crowd-about a dozen of them. A number of them had been in West Coast steam schooners. In Finland yo ur steam schooners were famous for the wages paid in them , and the food. But work, backbreaki ng work . Most of the older deepwater men had tried it- for a few years. Great grub, fine pay , but work to kill you.&quot; So recalled Capt. Sten Lille from hi s time as apprentice in Glenard. Those steam schooners worked essentially to move lumber from the Pacific Northwest, where it grew, to the cities of California, where it was needed. They emerged in the earl y 1880s, a few at a time; the shipyards of their origin were at San Francisco&#39;s Fisherman &#39;s Wharf or up Mi ss ion Creek at a point just be low Seventh Street, presentl y home to a gaunt freeway and nothing more. C. G. White built at Fisherman &#39;s Wharf and Alexander Hay and Boole &amp; Beaton on Mi ssion Creek. White, who came from Sweden in 1858 , launched the Surprise,JuliaH . Ray and West Coast from his modest little shipyard in 1885, the Greenwood and Whitesboro in 1886, the Alcatraz, Emily and South Coast in 1887 , and the second Julia H. Ray in 1888. He continued building, shifting to the Pacific Northwest, and launched a total of eighty-four vessels. White &#39;s obituary in the Everett Morning Tribune in 1905 stated th at &quot; while delirious he sat up in bed and drafted perfect plans for a new steam schooner. &quot; The success of the vessels he built is attested to in this comment on the West Coast, publi shed in the Humboldt Times, 13 October 1887: Steam Schooners Profitable. The profitable character of

the new steam schooners , of which many have been added to the coastal fl eet this year, may be gathered from the ex peri ence of the steam schooner West Coast, which was launched last year and has been employed without cessation since her firs t trip. The entire cost of the steamer, abo ut $25,000, has been repaid already to her owners from the profit of her trade. What class of vessel did the new type (gradually) repl ace? What craft carried the lumber down the coast to get the great Californ ia cities started? The answer is, for the most part, two-masted sailing schooners. They were small vessels, obliged with super seamanship to sail up to the cliffs of Sonoma and Mendocino counti es, to moor with an anchor ahead and a web of hawsers led to iron rings in rocks ashore. The unprotected coves-mere indentations in the coast-were called &quot;dog holes&quot;; the idea was to beat the next storm by getting the cargo aboard down a long wooden chute. As time went on the chute was rep laced by an overhead wire; the loads of lumber were sent down the wire to the schooner&#39;s decks on a trolley. In time, Californi a lumber was laded as well in the southern ports of Oregon and then farther up the coast in the Columbia River and in Grays Harbor, Washington; and redwood gave way to Douglas fir. A controversy has ex isted for a century over whether the first steam schooner amounted to an afterthought-stick an engine in a newly comp leted sailing schooner and , voila! a steam schooner. After all , there were literally hundreds of the two masters that had carried the lumber up to that point in the earl y I 880s-&quot;Flatfoot&quot; Hansen declared he saw fi fty becalmed under Point Reyes at one time. But although ex isting photograph s of the Celia and West Coast show a distinct sailing schooner hull, it is now felt that a naval architect mu st have been involved with their des ign

The barged Wapama awaits her fate.