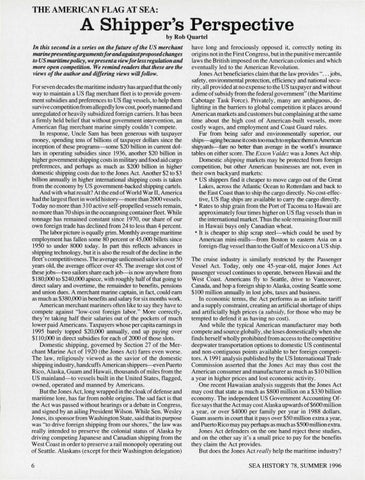 THE AMERICAN FLAG AT SEA:

A Shipper&#39;s Perspective by Rob Quartel In this second in a series on the future of the US merchant marine presentingargumentsforandagainstproposedchanges to US maritime policy, we present a viewfor less regulation and more open competition. We remind readers that these are the views of the author and differing views will follow. For seven decades the maritime industry has argued that the only way to maintain a US flag merchant fleet is to provide government subsidies and preferences to US flag vessels, to help them survive competition from allegedly low cost, poorly manned and unregulated or heavily subsidized foreign carriers. It has been a firmly held belief that without government intervention, an American flag merchant marine simply couldn&#39;t compete. In response, Uncle Sam has been generous with taxpayer money, spending tens of billions of taxpayer dollars since the inception of these programs-some $20 billion in current dollars in operating subsidies since 1936, another $20 billion in higher government shipping costs in military and food aid cargo preferences, and perhaps as much as $200 billion in higher · domestic shipping costs due to the Jones Act. Another $2 to $3 billion annually in higher international shipping costs is taken from the economy by US government-backed shipping cartels: And with what result? At the end of World War II, America had the largest fleet in world history-more than 2000 vessels. Today no more than 310 active self-propelled vessels remain, no more than 70 ships in the oceangoing container fleet. While tonnage has remained constant since 1970, our share of our own foreign trade has declined from 24 to less than 4 percent. The labor picture is equally grim. Monthly average maritime employment has fallen some 80 percent or 45,000 billets since 1950 to under 8000 today. In part this reflects advances in shipping technology, but it is also the result of the decline in the fleet&#39; s competitiveness. The average unlicensed sailor is over 50 years old, the average officer over 45. The average slot cost of these jobs-two sailors share each job--is now anywhere from $180,000 to $240,000 apiece, with roughly half of that going to direct salary and overtime, the remainder to benefits, pensions and union dues. A merchant marine captain, in fact, could earn as much as $380,000 in benefits and salary for six months work. American merchant mariners often like to say they have to compete against &quot;low-cost foreign labor.&quot; More correctly, they&#39;re taking half their salaries out of the pockets of much lower paid Americans. Taxpayers whose per capita earnings in 1995 barely topped $20,000 annually, end up paying over $110,000 in direct subsidies for each of 2000 of those slots. Domestic shipping, governed by Section 27 of the Merchant Marine Act of 1920 (the Jones Act) fares even worse. The law , religiously viewed as the savior of the domestic shipping industry, handcuffs American shippers-even Puerto Rico, Alaska, Guam and Hawaii, thousands of miles from the US mainland-to vessels built in the United States, flagged , owned, operated and manned by Americans. But the Jones Act, long wrapped in the cloak of defense and maritime lore, has far from noble origins. The sad fact is that the Act was passed without hearings or a debate in Congress, and signed by an ailing President Wilson. While Sen. Wesley Jones, its sponsor from Washington State, said that its purpose was &quot;to drive foreign shipping from our shores,&quot; the law was really intended to preserve the colonial status of Alaska by driving competing Japanese and Canadian shipping from the West Coast in order to preserve a rail monopoly operating out of Seattle. Alaskans (except for their Washington delegation)

have long and ferociously opposed it, correctly noting its origins not in the First Congress, but in the punitive mercantile laws the British imposed on the American colonies and which eventually led to the American Revolution. Jones Act beneficiaries claim that the law provides&quot; ... jobs, safety, environmental protection, efficiency and national security, all provided at no expense to the US taxpayer and without a dime of subsidy from the federal government&quot; (the Maritime Cabotage Task Force). Privately, many are ambiguous, delighting in the barriers to global competition it places around American markets and customers but complaining at the same time about the high cost of American-built vessels, more costly wages, and employment and Coast Guard rules. Far from being safer and environmentally superior, our ships-aging because it costs too much to replace them in American shipyards--fare no better than average in the world&#39;s insurance tables on either score. The Exxon Valdez was a Jones Act ship. Domestic shipping markets may be protected from foreign competition, but other American businesses are not, even in their own backyard markets: • US shippers find it cheaper to move cargo out of the Great Lakes, across the Atlantic Ocean to Rotterdam and back to the East Coast than to ship the cargo directly. No cost-effective, US flag ships are available to carry the cargo directly. •Rates to ship grain from the Port of Tacoma to Hawaii are approximately four times higher on US flag vessels than in the international market. Thus the sole remaining flour mill in Hawaii buys only Canadian wheat. • It is cheaper to ship scrap steel-which could be used by American mini-mills-from Boston to eastern Asia on a foreign-flag vessel than to the Gulf of Mexico on a US ship. The cruise industry is similarly restricted by the Passenger Vessel Act. Today, only one 45-year-old, major Jones Act passenger vessel continues to operate, between Hawaii and the West Coast. Americans fly to Seattle, drive to Vancouver, Canada, and hop a foreign ship to Alaska, costing Seattle some $100 million annually in lost jobs, taxes and business. In economic terms, the Act performs as an infinite tariff and a supply constraint, creating an artificial shortage of ships and artificially high prices (a subsidy, for those who may be tempted to defend it as having no cost). And while the typical American manufacturer may both compete and source globally, she loses domestically when she finds herself wholly prohibited from access to the competitive deepwater transportation options to domestic US continental and non-contiguous points available to her foreign competitors. A 1991 analysis published by the US International Trade Commission asserted that the Jones Act may thus cost the American consumer and manufacturer as much as $10 billion a year in higher prices and lost economic activity. One recent Hawaiian analysis suggests that the Jones Act may cost that state as much as $800 million on a $330 billion economy. The independent US Government Accounting Office says that the Act may cost Alaska upwards of $600 million a year, or over $4000 per family per year in 1988 dollars. Guam asserts in court that it pays over $50 million extra a year, and Puerto Rico may pay perhaps as much as $500 million extra. Jones Act defenders on the one hand reject these studies, and on the other say it &#39;s a small price to pay for the benefits they claim the Act provides. But does the Jones Act really help the maritime industry? SEA HISTORY 78 , SUMMER 1996

6 THE AMERICAN FLAG AT SEA: A Shipper's Perspective by Rob Quartet • 8 CAPE HORN ROAD, VIII: Columbus Opens the Americas to the World by Peter Stanford • 14 Primary Research at Its Height: The Monumental Work of Ed Bosley on Gloucester Fishing Schooners by Nancy d' Estang • 16 A Report from the Falkland Islands by Dorothy Packer • 19 An Elizabethan-Era Wreck in the Channel Islands by Tim Dingemans • 22 MODELMAKER'S CORNER: A History in Ivory by Scottie Dayton •