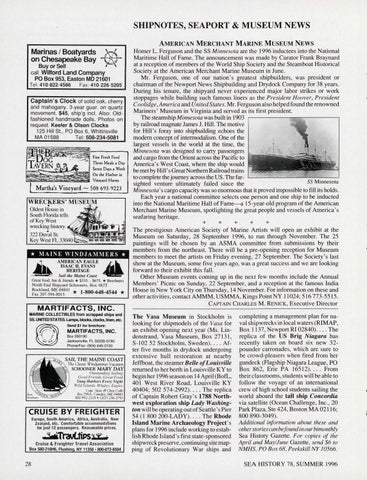 Marinas I Boatyards on Chesapeake Bay Buy or Sell

Homer L. Ferguson and the SS Minnesota are the 1996 inductees into the National Maritime Hall of Fame. The announcement was made by Curator Frank Braynard at a reception of members of the World Ship Society and the Steamboat Historical Society at the American Merchant Marine Museum in June. Mr. Ferguson, one of our nation&#39;s greatest shipbuilders, was president or chairman of the Newport News Shipbuilding and Drydock Company for 38 years. During his tenure, the shipyard never experienced major labor strikes or work stoppages while building such famous liners as the President Hoover, President Coolidge, America and United States. Mr. Ferguson also helped found the renowned Mariners&#39; Museum in Virginia and served as its first president. The steamship Minnesota was built in 1903 by railroad magnate James J. Hill. The motive for Hill&#39;s foray into shipbuilding echoes the modem concept of iniermodalism. One of the largest vessels in the world at the time, the Minnesota was designed to carry passengers and cargo from the Orient across the Pacific to America&#39;s West Coast, where the ship would be met by Hill&#39;s Great N orthem Railroad trains to complete the journey across the US. The far. sighted venture ultimately failed since the SS Minnesota Minnesota&#39;s cargo capacity was so enormous that it proved impossible to fill its holds. Each year a national committee selects one person and one ship to be inducted into the National Maritime Hall of Fame-a 15-year-old program of the American Merchant Marine Museum, spotlighting the great people and vessels of America&#39;s seafaring heritage.

The prestigious American Society of Marine Artists will open an exhibit at the Museum on Saturday, 28 September 1996, to run through November. The 25 paintings will be chosen by an ASMA committee from submissions by their members from the northeast. There will be a pre-opening reception for Museum members to meet the artists on Friday evening, 27 September. The Society&#39;s last show at the Museum, some five years ago, was a great success and we are looking forward to their exhibit this fall. Other Museum events coming up in the next few months include the Annual Members&#39; Picnic on Sunday, 22 September, and a reception at the famous India House in New York City on Thursday, 14 November. For information on these and other activities, contact AMMM, USMMA, Kings Point NY 11024; 516 773-5515 . CAPTAIN CHARLES M. RENICK, Executive Director The Vasa Museum in Stockholm is looking for shipmodels of the Vasa for an exhibit opening next year (Ms. Lindenstrand, Vasa Museum, Box 27131, S-102 52 Stockholm, Sweden) .... After five months in drydock undergoing extensive hull restoration at nearby Jeftboat, the steamer Belle of Louisville returned to her berth in Louisville KY to begin her 1996 season on 14 April (BotL, 401 West River Road, Louisville KY 40404; 502 574-2992) .... The replica of Captain Robert Gray&#39;s 1788 Northwest exploration ship Lady Washington will be operating out of Seattle&#39;s Pier 54 (1 800 200-LADY) .... The Rhode Island Marine Archaeology Project &#39;s plans for 1996 include working to establish Rhode Island&#39;s first state-sponsored shipwreck preserve, continuing site mapping of Revolutionary War ships and

completing a management plan for naval shipwrecks in local waters (RIMAP, Box 1137, Newport RI02840) .... The replica of the US Brig Niagara has recently taken on board six new 32pounder carronades, which are sure to be crowd-pleasers when fired from her gundeck (Flagship Niagara League, PO Box 862, Erie PA 16512) .... From their classrooms, students will be able to follow the voyage of an international crew of high school students sailing the world aboard the tall ship Concordia via satellite (Ocean Challenge, Inc ., 20 Park Plaza, Ste424, Boston MA 02116; 800 890-3049). Additional information about these and other stories can befound in our bimonthly Sea History Gazette. For copies of the April and May/June Gazette, send $6 to NMHS, PO Box 68, Peekskill NY 10566. SEA HISTORY 78, SUMMER 1996

6 THE AMERICAN FLAG AT SEA: A Shipper's Perspective by Rob Quartet • 8 CAPE HORN ROAD, VIII: Columbus Opens the Americas to the World by Peter Stanford • 14 Primary Research at Its Height: The Monumental Work of Ed Bosley on Gloucester Fishing Schooners by Nancy d' Estang • 16 A Report from the Falkland Islands by Dorothy Packer • 19 An Elizabethan-Era Wreck in the Channel Islands by Tim Dingemans • 22 MODELMAKER'S CORNER: A History in Ivory by Scottie Dayton •