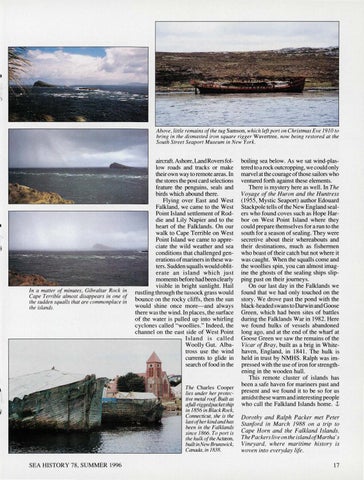 Above, little remains of the tug Samson, which left port on Christmas Eve 1910 to bring in the dismasted iron square rigger Wavertree, now being restored at the South Street Seaport Museum in New York .

aircraft. Ashore, Land Rovers follow roads and tracks or make their own way to remote areas. In the stores the post card selections feature the penguins, seals and birds which abound there. Flying over East and West Falkland, we came to the West Point Island settlement of Roddie and Lily Napier and to the heart of the Falklands. On our walk to Cape Terrible on West Point Island we came to appreciate the wild weather and sea ~-::-"~- ~- ~--=~-~~--·~·' - :~~--~~ ~~ _:.'o:~-"~-;:-.::::; conditions that challenged generations of mariners in these wa" . _ ters. Sudden squalls would oblit. erate an island which just ...... --~ . .·moments before had been clearly ' . ,;1"i~'* • visible in bright sunlight. Hail In a matter of minutes, Gibraltar Rock in rustling through the tussock grass would Cape Terrible almost disappears in one of bounce on the rocky cliffs, then the sun the sudden squalls that are commonplace in would shine once more-and always the islands. there was the wind. In places, the surface of the water is pulled up into whirling cyclones called "woollies." Indeed, the channel on the east side of West Point Island is called Woolly Gut. Albatross use the wind currents to glide in search of food in the ~-

The Charles Cooper lies under her protective metal roof Built as afull-riggedpacketship in 1856 in Black Rock, Connecticut, she is the lastofherkindandhas been in the Falklands since 1866. To port is the hulk ofthe Actreon, built in New Brunswick, Canada, in 1838.

boiling sea below. As we sat wind-plastered to a rock outcropping, we could only marvel at the courage of those sailors who ventured forth against these elements. There is mystery here as well. In The Voyage of the Huron and the Huntress (1955 , Mystic Seaport) author Edouard Stackpole tells of the New England sealers who found coves such as Hope Harbor on West Point Island where they could prepare themselves for a run to the south for a season of sealing. They were secretive about their whereabouts and their destinations, much as fishermen who boast of their catch but not where it was caught. When the squalls come and the woollies spin, you can almost imagine the ghosts of the sealing ships slipping past on their journeys. On our last day in the Falklands we found that we had only touched on the story. We drove past the pond with the black-headed swans to Darwin and Goose Green, which had been sites of battles during the Falklands War in 1982. Here we found hulks of vessels abandoned long ago, and at the end of the wharf at Goose Green we saw the remains of the Vicar of Bray, built as a brig in Whitehaven, England, in 1841. The hulk is held in trust by NMHS. Ralph was impressed with the use of iron for strengthening in the wooden hull. This remote cluster of islands has been a safe haven for mariners past and present and we found it to be so for us amidst these warm and interesting people who call the Falkland Islands home. t

Dorothy and Ralph Packer met Peter Stanford in March 1988 on a trip to Cape Horn and the Falkland Islands . The Packers live on the island ofMartha's Vineyard, where maritime history is woven into everyday life.

6 THE AMERICAN FLAG AT SEA: A Shipper's Perspective by Rob Quartet • 8 CAPE HORN ROAD, VIII: Columbus Opens the Americas to the World by Pet...

6 THE AMERICAN FLAG AT SEA: A Shipper's Perspective by Rob Quartet • 8 CAPE HORN ROAD, VIII: Columbus Opens the Americas to the World by Pet...