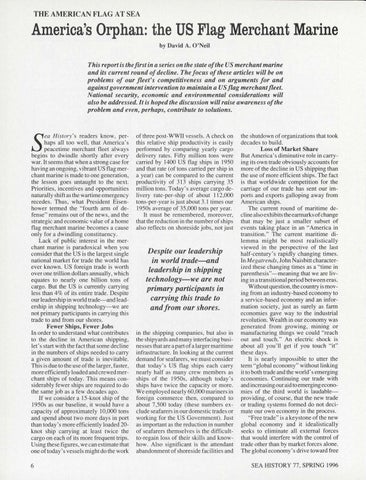 This report is the first in a series on the state ofthe US merchant marine and its current round of decline. The focus of these articles will be on problems of our fleet&#39;s competitiveness and on arguments for and against government intervention to maintain a US flag merchant fleet. National security, economic and environmental considerations will also be addressed. It is hoped the discussion will raise awareness of the problem and even, perhaps, contribute to solutions.

ea History&#39; s readers know , perhaps all too well, that America &#39; s peacetime merchant fleet always begins to dwindle shortly after every war. It seems that when a strong case for having an ongoing, vibrant US flag merchant marine is made to one generation, the lesson goes untaught to the next. Priorities, incentives and opportunities naturally shift as the wartime emergency recedes. Thus, what President Eisenhower termed the &quot;fourth arm of defense&quot; remains out of the news, and the strategic and economic value of a home flag merchant marine becomes a cause only for a dwindling constituency. Lack of public interest in the merchant marine is paradoxical when you consider that the US is the largest single national market for trade the world has ever known. US foreign trade is worth over one trillion dollars annually, which equates to nearly one billion tons of cargo. But the US is currently carrying less than 4% of its entire trade. Despite our leadership in world trade-and leadership in shipping technology-we are not primary participants in carrying this trade to and from our shores.

of three post-WWII vessels. A check on this relative ship productivity is easily performed by comparing yearly cargo delivery rates. Fifty million tons were carried by 1400 US flag ships in 1950 and that rate (of tons carried per ship in a year) can be compared to the current productivity of 313 ships carrying 35 million tons. Today &#39;s average cargo delivery rate-per-ship of about 112,000 tons-per-year is just about 3.1 times our 1950s average of 35,000 tons per year. It must be remembered, moreover, that the reduction in the number of ships also reflects on shoreside jobs, not just

Despite our leadership in world trade--and leadership in shipping technology-we are not primary participants in carrying this trade to and from our shores.

Fewer Ships, Fewer Jobs In order to understand what contributes to the decline in American shipping, let&#39;s start with the fact that some decline in the numbers of ships needed to carry a given amount of trade is inevitable. This is due to the use of the larger, faster, more efficiently loaded and crewed merchant ships of today. This means considerably fewer ships are required to do the same job as a few decades ago. If we consider a 15-knot ship of the 1950s as our baseline, it would have a capacity of approximately 10,000 tons and spend about two more days in port than today&#39;s more efficiently loaded 20knot ship carrying at least twice the cargo on each of its more frequent trips. Using these figures, we can estimate that one of today&#39;s vessels might do the work 6

in the shipping companies, but also in the shipyards and many interfacing businesses that are a part of a larger maritime infrastructure. In looking at the current demand for seafarers, we must consider that today &#39; s US flag ships each carry nearly half as many crew members as ships of the 1950s, although today &#39;s ships have twice the capacity or more. We employed nearly 60,000 mariners in foreign commerce then, compared to about 7,500 today (these numbers exclude seafarers in our domestic trades or working for the US Government). Just as important as the reduction in number of seafarers themselves is the difficultto-regain loss of their skills and knowhow. Also significant is the attendant abandonment of shoreside facilities and

the shutdown of organizations that took decades to build.

Loss of Market Share But America &#39; s diminutive role in carrying its own trade obviously accounts for more of the decline in US shipping than the use of more efficient ships. The fact is that worldwide competition for the carriage of our trade has sent our imports and exports galloping away from American ships. The current round of maritime decline also exhibits the earmarks of change that may be just a smaller subset of events taking place in an &quot;America in transition.&quot; The current maritime dilemma might be most realistically viewed in the perspective of the last half-century&#39;s rapidly changing times. In Megatrends, John Naisbittcharacterized these changing times as a &quot;time in parenthesis&quot;-meaning that we are living in a transitional period between eras. Without question, the country is moving from an industry-based economy to a service-based economy and an information society, just as surely as farm economies gave way to the industrial revolution. Wealth in our economy was generated from growing, mining or manufacturing things we could &quot;reach out and touch.&quot; An electric shock is about all you &#39;II get if you touch &quot;it&quot; these days. It is nearly impossible to utter the term &quot;global economy&quot; without linking it to both tradeand the world&#39;s emerging economies. Continuing our trade with and increasing our aid to emerging economies of the third world is laudableproviding, of course, that the new trade or trading systems formed do not decimate our own economy in the process. &quot;Free trade&quot; is a keystone of the new global economy and it idealistically seeks to eliminate all external forces that would interfere with the control of trade other than by market forces alone. The global economy&#39;s drive toward free SEA HISTORY 77, SPRING 1996