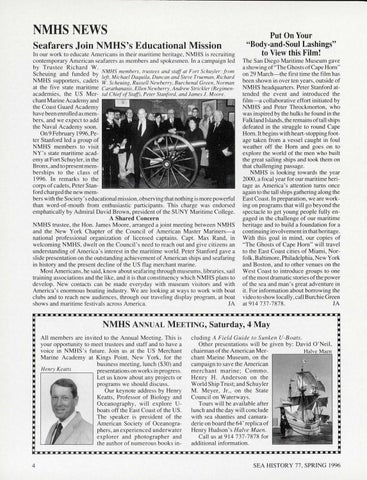 NMHSNEWS Seafarers Join NMHS&#39;s Educational Mission In our work to educate Americans in their maritime heritage, NMHS is recruiting contemporary American seafarers as members and spokesmen. In a campaign led by Tru stee Richard W. members , trustees and staff at Fort Schuyler: from Scheuing and funded by NMHS leji, Michael Daquila , Duncan and Steve Trueman , Richard NMHS supporters, cadets W. Scheuing , Russell Newberry, Burchenal Green , Norman at the five state maritime Carathanasis, Ellen Newberry, Andrew Strickler (R egimenacademies, the US Mer- tal Chief of Staff) , Peter Stanford, and James J. Moore. chantMarine Academy and the Coast Guard Academy have been enrolled as members, and we expect to add the Naval Academy soon. On 9 February 1996, Peter Stanford led a group of NMHS members to visit NY &#39;s state maritime academy at Fort Schuyler, in the Bronx, and to present members hips to the class of 1996. In remarks to the corps of cadets, Peter Stanford charged the new members with the Society &#39;s educational mission, observing that nothing is more powerful than word-of-mouth from enthusiastic participants. This charge was endorsed emphatically by Admiral David Brown, president of the SUNY Maritime College. A Shared Concern NMHS trustee, the Hon . James Moore, arranged a joint meeting between NMHS and the New York Chapter of the Council of American Master Mariners-a national professional organization of licensed captains. Capt. Max Rand, in welcoming NMHS , dwelt on the Council&#39;s need to reach out and give citizens an understanding of America &#39; s interest in the maritime world. Peter Stanford gave a slide presentation on the outstanding achievement of American ships and seafaring in history and the present decline of the US flag merchant marine. Most Americans, he said, know about seafaring through museums, libraries, sail training associations and the like, and it is that constituency which NMHS plans to develop. New contacts can be made everyday with museum visitors and with America &#39; s enormous boating industry. We are looking at ways to work with boat clubs and to reach new audiences, through our traveling display program, at boat shows and maritime festivals across America. JA

Put On Your &quot;Body-and-Soul Lashings&quot; to View this Film! The San Diego Maritime Museum gave a showing of&quot;The Ghosts of Cape Horn&quot; on 29 March-the first time the film has been shown in over ten years, outside of NMHS headquarters. Peter Stanford attended the event and introduced the film-a collaborative effort initiated by NMHS and Peter Throckmorton, who was inspired by the hulks he found in the Falkland Islands, the remains of tall ships defeated in the struggle to round Cape Horn. It begins with heart-stopping footage taken from a vessel caught in foul weather off the Horn and goes on to explore the world of the men who built the great sailing ships and took them on that challenging passage. NMHS is looking towards the year 2000, a focal year for our maritime heritage as America&#39;s attention turns once again to the tall ships gathering along the East Coast. In preparation, we are working on programs that will go beyond the spectacle to get young people fully engaged in the challenge of our maritime heritage and to build a foundation for a continuing involvement in that heritage. With this goal in mind, our copies of &quot;The Ghosts of Cape Horn&quot; will travel to the East Coast cities of Miami, Norfolk, Baltimore, Philadelphia, New York and Boston, and to other venues on the West Coast to introduce groups to one of the most dramatic stories of the power of the sea and man &#39; s great adventure in it. For information about borrowing the video to show locally, cal 1B urchie Green at 914 737-7878. JA

NMHS ANNUAL MEETING, Saturday, 4 May All members are invited to the Annual Meeting. This is your opportunity to meet trustees and staff and to have a voice in NMHS&#39;s future. Join us at the US Merchant Marine Academy at Kings Point, New York, for the business meeting, lunch ($30) and Henry Keatts presentations on works in progress. Let us know about any projects or programs we should discuss . Our keynote address by Henry Keatts, Professor of Biology and Oceanography, will explore Uboats off the East Coast of the US. The speaker is president of the American Society of Oceanographers, an experienced underwater explorer and photographer and the author of numerous books in-

eluding A Field Guide to Sunken U-Boats. Other presentations will be given by: David O&#39;Neil, chairman of the American MerHalve Maen chant Marine Museum, on the campaign to save the American merchant marine; Commo. Henry H . Anderson on the World Ship Trust; and Schuyler M. Meyer, Jr., on the State Council on Waterways. Tours will be available after lunch and the day will conclude with sea shanties and camaraderie on board the64&#39; replica of Henry Hudson &#39; s Halve Maen. Call us at 914 737-7878 for additional information.