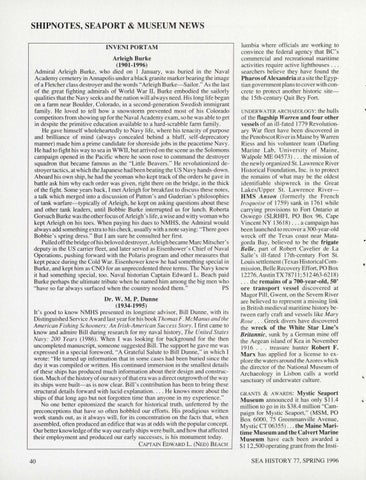 SHIPNOTES, SEAPORT &amp; MUSEUM NEWS INVENI PORT AM Arleigh Burke (1901-1996) Admiral Arleigh Burke, who died on I January, was buried in the Naval Academy cemetery in Annapolis under a black granite marker bearing the image of a Fletcher class destroyer and the words &quot;Arleigh Burke-Sailor.&quot; As the last of the great fighting admirals of World War II, Burke embodied the sailorly qualities that the Navy seeks and the nation will always need. His long life began on a farm near Boulder, Colorado, in a second-generation Swedish immigrant family. He loved to tell how a snowstorm prevented most of hi s Colorado competitors from showing up for the Naval Academy exam, so he was able to get in despite the primitive education available to a hard-scrabble farm family . He gave himself wholeheartedly to Navy life, where his tenacity of purpose and brilliance of mind (always concealed behind a bluff, self-deprecatory manner) made him a prime candidate for shoreside jobs in the peacetime Navy. He had to fight his way to sea in WWII, but arrived on the scene as the Solomons campaign opened in the Pacific where he soon rose to command the destroyer squadron that became famous as the &quot;Little Beavers.&quot; He revolutionized destroyer tactics, at which the Japanese had been beating the US Navy hands-down. Aboard his own ship, he had the yeoman who kept track of the orders he gave in battle ask him why each order was given, right there on the bridge, in the thick of the fight. Some years back, I met Arleigh for breakfast to di scuss these notes, a talk which merged into a di scussion of Patton&#39;s and Guderian&#39;s philosophies of tank warfare-typically of Arleigh, he kept on asking questions about these and other tank leaders, until Bobbie Burke interrupted us for lunch. Roberta Gorsuch Burke was the other focus of Arleigh &#39;s life, a wise and witty woman who kept Arleigh on his toes. When paying his dues to NMHS, the Admiral would always add something extra to his check, usually with a note saying: &quot;There goes Bobbie&#39;s spring dress .&quot; But I am sure he consulted her first. Pulled off the bridge of hi s beloved destroyer, Arleigh became Marc Mitscher&#39; s deputy in the US carrier fleet, and later served as Eisenhower&#39;s Chief of Naval Operations, pushing forward with the Polaris program and other measures that kept peace during the Cold War. Eisenhower knew he had something special in Burke, and kept him as CNO for an unprecedented three terms. The Navy knew it had something special, too. Naval historian Captain Edward L. Beach paid Burke perhaps the ultimate tribute when he named him among the big men who &quot;have so far always surfaced when the country needed them. &quot; PS Dr. W. M. P. Dunne (1934-1995) It&#39;s good to know NMHS presented its longtime advisor, Bill Dunne, with its Distinguished Service Award last year for his book Thomas F. McManus and the American Fishing Schooners: An Irish-American Success Story. I first came to know and admire Bill during research for my naval history, The United States Navy: 200 Years (1986). When I was looking for background for the then uncompleted manuscript, someone suggested Bill. The support he gave me was expressed in a special foreword, &quot;A Grateful Salute to Bill Dunne,&quot; in which I wrote: &quot;He turned up information that in some cases had been buried since the day it was compiled or written. His continued immersion in the smallest detail s of these ships has produced much information about their design and construction. Much of the history of our navy of that era was a direct outgrowth of the way its ships were built- as is now clear. Bill &#39;s contribution has been to bring these structural details forward with lucid explanation .. . . He knows more about the ships of that long ago but not forgotten time than anyone in my experience.&quot; No one better epitomized the search for historical truth, unfettered by the preconceptions that have so often hobbled our efforts. His prodigious written work stands out, as it always will, for its concentration on the facts that, when assembled, often produced an edifice that was at odds with the popular concept. Our better knowledge of the way our early ships were built, and how that affected their employment and produced our early successes, is his monument today. CAPTAIN EDWARD L. (NED) BEACH 40

lumbia where officials are working to convince the federal agency that BC&#39;s commercial and recreational maritime activities require active lighthouses ... searchers believe they have found the Pharos of Alexandria at a site the Egyptian government plans to cover with concrete to protect another historic sitethe 15th-century Qait Bey Fort. UNDERWATER ARCHAEOLOGY: the hull s of the flagship Warren and four other vessels of an ill-fated 1779 Revolutionary War fleet have been discovered in the Penobscot River in Maine by Warren Riess and hi s volunteer team (Darling Marine Lab , University of Maine, Walpole ME 04573) .. . the mission of the newly organized St. Lawrence River Historical Foundation, Inc. is to protect the remains of what may be the oldest identifiable shipwreck in the Great Lakes/Upper St. Lawrence RiverHMS Anson (formerly the French lroquoise of 1759) sank in 1761 while carrying provisions to Fort Ontario at Oswego (SLRHFI, PO Box 96, Cape Vincent NY 13618) ... a campaign has been launched to recover a 300-year-old wreck off the Texas coast near Matagorda Bay, believed to be the frigate Belle, part of Robert Cavelier de La Salle&#39;s ill-fated 17th-century Fort St. Louis settlement (Texas Hi storical Commission, Belle Recovery Effort, PO Box 12276,Austin TX78711 ; 512463-6218) . .. the remains of a 700-year-old, 50&#39; ore transport vessel discovered at Magor Pill, Gwent, on the Severn River are believed to represent a missing link in British medieval maritime hi story between early craft and vessels like Mary Rose .. . Greek divers have discovered the wreck of the White Star Line&#39;s Britannic, sunk by a German mine off the Aegean island of Kea in November 1916 . . . treasure hunter Robert F. Marx has applied for a license to explore the waters around the Azores which the director of the National Museum of Archaeology in Lisbon calls a world sanctuary of underwater culture. GRANTS &amp; AWARDS: Mystic Seaport Museum announced it has only $11.4 million to go in its $38.4 million &quot;Campaign for Mystic Seaport,&quot; (MSM, PO Box 6000, 75 Greenmanville Avenue, Mystic CT 06355) .. . the Maine Maritime Museum and the Calvert Marine Museum have each been awarded a $1 12,500 operating grant from the lnstiSEA HISTORY 77, SPRING 1996