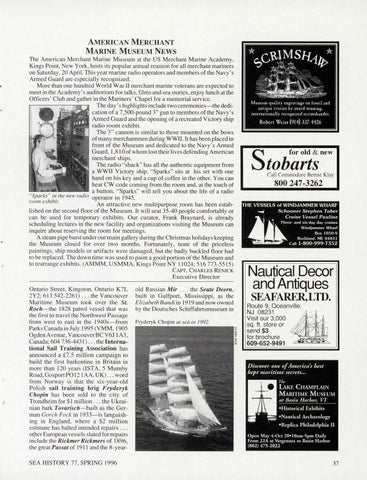 AMERICAN MERCHANT MARINE MUSEUM NEWS The American Merchant Marine Museum at the US Merchant Marine Academy, Kings Point, New York, hosts its popular annual reunion for all merchant mariners on Saturday, 20 April. This year marine radio operators and members of the Navy&#39;s Armed Guard are especially recognized. More than one hundred World War II merchant marine veterans are expected to meet in the Academy&#39;s auditorium for talks , films and sea stories, enjoy lunch at the Officers&#39; Club and gather in the Mariners&#39; Chapel for a memorial service. The day&#39;s highlights include two ceremonies-the dedication of a 7,500-pound 3&quot; gun to members of the Navy&#39;s Armed Guard and the opening of a recreated Victory ship radio room exhibit. The 3&quot; cannon is similar to those mounted on the bows of many merchantmen during WWII. It has been placed in front of the Museum and dedicated to the Navy &#39;s Armed Guard, 1,810 of whom lost their lives defending American merchant ships. The radio &quot;shack&quot; has all the authentic equipment from a WWII Victory ship. &quot;Sparks&quot; sits at his set with one hand on his key and a cup of coffee in the other. You can hear CW code coming from the room and, at the touch of &quot; ,, . . a button, &quot;Sparks&quot; will tell you about the life of a radio Sparks .in the new radw operator in 1945. room exhibit. An attractive new multipurpose room has been established on the second floor of the Museum. It will seat 35-40 people comfortably or can be used for temporary exhibits. Our curator, Frank Braynard, is already scheduling lectures in the new facility and organizations visiting the Museum can inquire about reserving the room for meetings. A steam pipe burst under our main gallery during the Christmas holidays keeping the Museum closed for over two months. Fortunately, none of the priceless paintings, ship models or artifacts were damaged, but the badly buckled floor had to be replaced . The down time was used to paint a good portion of the Museum and to rearrange exhibits. (AMMM, USMMA, Kings Point NY 11024; 5 I 6 773-5515)

Ontario Street, Kingston , Ontario K7L 2Y2; 613 542-2261) . .. the Vancouver Maritime Museum took over the St. Roch-the 1828 patrol vessel that was the first to travel the Northwest Passage from west to east in the I 940s-from Parks Canada in July 1995 (VMM, 1905 Ogden Avenue, VancouverBCV6J 1A3, Canada; 604 736-4431) ... the International Sail Training Association has announced a £7.5 million campaign to build the first barkentine in Britain in more than 120 years (IST A, 5 Mumby Road, Gosport PO 12 I AA, UK) ... word from Norway is that the six-year-old Polish sail training brig Fryderyk Chopin has been sold to the city of Trondheim for $1 million ... the Ukrainian bark Tovarisch-built as the German Gorch Fock in 1933-is languishing in England, where a $2 million estimate has halted intended repairs ... other European vessels slated for repairs include the Rickmer Rickmers of 1896, the great Passat of 1911 and the 8-yearSEA HISTORY 77, SPRING 1996

old Russian Mir . . . the Seute Deern, built in Gulfport, Mississippi, as the Elizabeth Bandi in 1919 and now owned by the Deutsches Schiffahrtsmuseum in Fryderyk Chopin at sea in 1992.