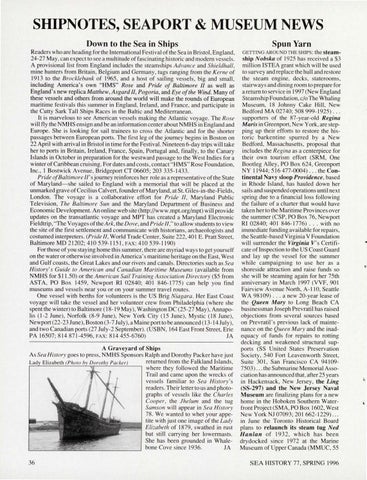 SHIPNOTES, SEAPORT &amp; MUSEUM NEWS Down to the Sea in Ships

Readers who are heading for the International Festival of the Sea in Bristol, England, 24-27 May, can expect to see a multitude of fascinating historic and modem vessels. A provisional li st from England includes the steamships Advance and Shieldhall, mine hunters from Britain, Belgium and Germany, tugs ranging from the Kerne of 1913 to the Brocklebank of 1965 , and a host of sai ling vessels, big and small, including America&#39;s own &quot;HMS&quot; Rose and Pride of Baltimore II as well as England&#39;s new replica Matthew, Asgard II, Pogoria, and Eye of the Wind. Many of these vessels and others from around the world will make the rounds of European maritime festivals thi s summer in England , Ireland, and France, and participate in the Cutty Sark Tall Ships Races in the Baltic and Mediterranean. It is marvelous to see American vessels making the Atlantic voyage. The Rose will fly the NMHS ensign and be an information center about NMHS in England and Europe. She is looking for sail trainees to cross the Atlantic and for the shorter passages between European ports. The first leg of the journey begins in Boston on 22 April with arrival in Bristol in time for the Festival. Nineteen 6-day trips will take her to ports in Britain, Ireland , France, Spain, Portugal and, finally, to the Canary Islands in October in preparation for the westward passage to the West Indies for a winter of Caribbean cruising. For dates and costs, contact &quot;HMS&quot; Rose Foundation, Inc., I Bostwick Avenue, Bridgeport CT 06605 ; 203 335-1433. Pride of Baltimore I l&#39; s journey reinforces her role as a representative of the State of Maryland-she sailed to England with a memorial that will be placed at the unmarked grave of Cecilius Calvert, founderofMaryland, at St. Giles-in-the-Fields, London. The voyage is a collaborative effort for Pride II, Maryland Public Televi sion, The Baltimore Sun and the Maryland Department of Business and Economic Development. An online web site (http://www.mpt.org/mpt) will provide updates on the transatlantic voyage and MPT has created a Maryland Electronic Field trip, &quot;The Voyages of the Ark, the Dove, and Pride II,&quot; to allow students to view the site of the first settlement and communicate with historians, archaeologists and costumed interpreters. (Pride II, World Trade Center, Suite 222, 401 E. Pratt Street, Baltimore MD 21202; 410 539-1151, FAX: 410 539-1190) For those of you staying home thi s summer, there are myriad ways to get yourself on the water or otherwise involved in America&#39;s maritime heritage on the East, West and Gulf coasts, the Great Lakes and our rivers and canals. Directories such as Sea History&#39;s Guide to American and Canadian Maritime Museums (avai lable from NMHS for$ I I .50) or the American Sail Training Association Directory ($5 from ASTA, PO Box 1459, Newport RI 02840; 401 846-1775) can help you find museums and vessels near you or on your summer travel routes. One vessel with berths for volunteers is the US Brig Niagara. Her East Coast voyage wi ll take the vessel and her volunteer crew from Philadelphia (where she spent the winter) to Baltimore (18-19 May) , Washington DC (25-27 May), Annapoli s (1-2 June), Norfolk (8-9 June), New York City (15 June), Mystic ( 18 June), Newport (22-23 June), Boston (3-7 July), aMaine port to be announced ( 13-14July), and two Canadian ports (27 July-2 September). (USBN, 164 East Front Street, Erie PA 16507; 814 871-4596, FAX: 814 455-6760) JA

A Graveyard of Ships As Sea History goes to press, NMHS Sponsors Ralph and Dorothy Packer have just Lady Elizabeth (Photo by Dorothy Packer) returned from the Falkland Islands, where they fo ll owed the Maritime Trail and came upon the wrecks of vessels fami li ar to Sea History&#39;s readers. Their letter to us and photographs of vessels like the Charles Cooper, the Jhelum and the tug Samson will appear in Sea History 78. We wanted to whet your appetite with just one image of the lady Elizabeth of 1879, swathed in rust but still carrying her lowermasts. She has been grounded in Whalebone Cove since 1936. JA

ship Nobska of 1925 has received a $3 million !STEA grant which will be used to survey and replace the hull and restore the steam engine, decks, staterooms, stairways and dining room to prepare for a return to service in 1997 (New England Steamship Foundation, c/o The Whaling Museum, 18 Johnny Cake Hill , New Bedford MA 02740; 508 999-1925) .. . supporters of the 87-year-old Regina Maris in Greenport, New York, are stepping up their efforts to restore the hi storic barkentine spurred by a New Bedford, Massachusetts, proposal that includes the Regina as a centerpiece for their own touri sm effort (SRM, One Bootleg Alley, PO Box 624, Greenport NY 11944; 516 477-0004) ... the Continental Navy sloop Providence , based in Rhode Island, has hauled down her sails and suspended operations until next spring due to a financial loss following the failure of a charter that wou ld have taken he r to the Maritime Provinces over the summer (CSP, PO Box 76, Newport RI 02840; 40 J 846-1776) ... with no immediate funding available for repairs , the Seattle-based Virginia V Foundation will surrender the Virginia V &#39; s Certificate oflnspection to the US Coast Guard and lay up the vessel for the summer while campaigning to use her as a shoreside attraction and raise funds so she will be steaming again for her 75th anniversary in March 1997 (VVF, 901 Fairview Avenue North, A-110, Seattle WA 98 I 09) ... a new 20-year lease of the Queen Mary to Long Beach CA businessman Joseph Prevratil has raised objections from several sources based on Prevratil &#39;s previous lack of maintenance on the Queen Mary and the inadeq uacy of funds for repairs to rotting decking and weakened structural supports (SS United States Preservation Society, 540 Fort Leavenworth Street, Suite 301, San Francisco CA 941097503) .. . the Submarine Memorial Association has announced that, after25 years in Hackensack, New Jersey, the Ling (SS-297) and the New Jersey Naval Museum are finalizing plans for a new home in the Hoboken Southern Waterfront Project (SMA , PO Box 1602, West New York NJ 07093; 201 662-1229) .. . in June the Toronto Historical Board plans to relaunch its steam tug Ned Hanlan of 1932, wh ich has been drydocked since 1972 at the Marine Museum of Upper Canada (MMUC, 55 SEA HISTORY 77 , SPRING 1996